The Ashes 2021-22: BT Sport enhances the host coverage with a virtual studio and cloud workflows 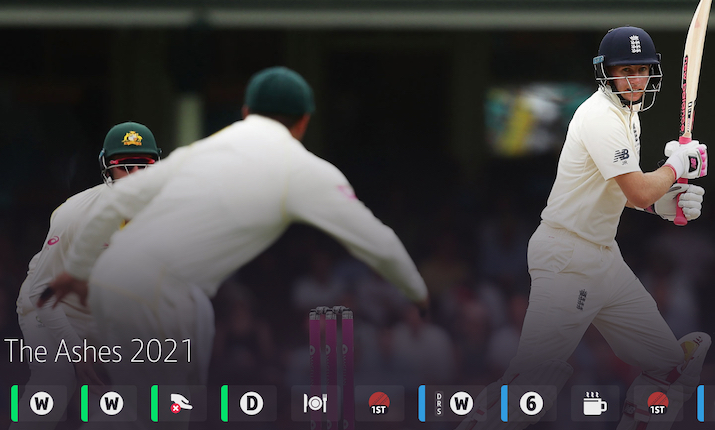 BT Sport is using Opta Stats to drive an interactive Timeline as a feature of its on-demand content for The Ashes. Previously only available on the BT Sport app for mobile and tablet, it is now available on large screen devices for the first time

With England currently up against it in Brisbane in the first Ashes Test, as a Pom it is probably best to look ahead to the other four tests of the 2021-22 series in Australia which are all being broadcast live on BT Sport. It is also a good idea to look the other way and talk about the broadcaster’s coverage rather than events on the pitch.

Joe Root’s team are looking to emulate the heroes of 2010-11, but face a mammoth task in a country where they have lost nine of their last ten Tests, including a 4-0 series drubbing four years ago. For BT Sport, things are looking more positive.

“Because of the challenging logistics around COVID we are bringing in the host feed and commentary into a gallery at Stratford and then adding our own presentation overlay,” explains BT Sport COO Jamie Hindhaugh, talking to SVG Europe.

“Because we’re not able to be there in person like many of the Barmy Army [England’s loyal band of supporters] we wanted to bring a bit of Australia to Stratford.”

This led to the creation of a virtual studio for presentation. Designed with graphics supplier Moov using Brainstorm software, the design includes a map of Australia on the set’s floor with a green screen cyc displaying panoramas of the venue (Brisbane and its cricket ground in this first week). The set up also has a virtual window for video display.

BT Sport has trialled this before, when its facilities hosted programming in support of ITV’s I’m A Celebrity Get Me Out Of Here, but this is a new direction for its sports output.

“It’s about trying to move away from a static studio to bring a bit of interactivity into coverage,” says Hindhaugh. “For instance, we can bring in fans [via Zoom] to talk to our presentation and studio guests. It’s a new direction for us and we’re very pleased with it.”

“We felt this was an ideal opportunity to stress-test this type of production and explore what the opportunities are around cloud production.”

BT Sport does have an additional camera and presenter (Alison Mitchell) team on location to augment the host broadcaster coverage from Fox Sports. It is also going to air with Fox Sports’ live commentary including Shane Warne, Adam Gilchrist, Allan Border but will add its own commentary to cut in whenever former England captain turned pundit Michael Vaughan speaks. While Vaughan is in Australia working for Fox and was part of BT Sport’s original pres line up, a recent furore over alleged racism at Yorkshire Cricket Club has seen the former England captain dropped by BT Sport.

BT Sport’s Timeline gets to the heart of The Ashes, which begins at midnight UK time, and ends around 8am. It enables people to go in and catch up on key moments when they wake up

A key part of BT’s Ashes offer to fans is the chance to catch up on every significant moment – wicket, boundary, dropped catches, appeal and so on. It is using Opta Stats to drive an interactive Timeline as a feature of its on-demand content available. Previously only available on the BT Sport app for mobile and tablet, it is now available on large screen devices for the first time.

“Timeline gets to the heart of the Matchday Experience of an event that begins at midnight and ends around 8am. It enables people to go in and catch up on key moments when they wake up,” adds Hindhaugh.

Also part of this catch-up coverage is Ashes Daily which, at 8am, is scheduled between the live match and the extended highlights.

The studio base for the live breakfast show is Sixes, the competitive social venue in Soho in London where punters can replicate the feeling of bat on ball in the venue’s hi-tech cricket nets.

“This is an end to end cloud production and something that Andy [Beale, BT Sport chief engineer] has been working on for a while,” Hindhaugh says. “There are fixed cameras and two camera ops at Sixes with feeds taken into our private cloud and production entirely happening from a virtual gallery in Stratford.”

The show is simulcast on BT Sport linear and digital platforms and via the BT Sport app and is also made available as a podcast.

“We felt this was an ideal opportunity to stress-test this type of production and explore what the opportunities are around cloud production,” he continues. “This type of workflow is especially important when the site of content is a long way away and is cheaper than running extensive cable networks.

“It’s a learning exercise as to what is still not mature and what we can influence to enhance remote productions going forward.”

Hindhaugh adds: “Remote is now standard. I think we’ll still rely on agile working and workspaces going forward. Travel is hard and even more so as the pandemic seems to retighten its grip so we need to bring back the live experience in all the ways we can. We still rely on vMix at operator homes for coverage of Premier League matches, for instance.

“The trend toward personalisation and experiences that give the audience more input into programming is a very exciting trend for us. COVID has challenged us to think how we create personalised experiences that are not about a two-dimensional sound and picture.”

BT Sport’s live coverage of the 2021-22 Ashes series includes all five test matches and is scheduled to continue until the middle of January 2022.