A breakthrough in broadcast quality virtual advertising has been achieved: after a successful program of live testing, the German Football League (DFL) has approved the Supponor technology used by Lagardère Sports. 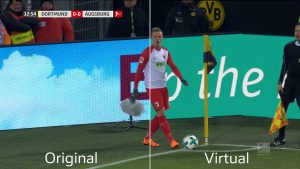 This means a major hurdle for the regular use of virtual perimeter advertising in the Bundesliga has been overcome. At the Bundesliga match between Borussia Dortmund and FC Augsburg on 26 February 2018 at Signal Iduna Park, an additional world feed (worldwide outside the German-speaking area) was broadcast live for the first time in international markets. The live test was the conclusion of a series of tests coordinated between the DFL/Sportcast, Supponor, Lagardère Sports and LED technology provider ADI.

Lagardère Sports has been working for a long time in close cooperation with the DFL and its exclusive strategic partnership with the leading virtual technology provider Supponor towards introducing virtual perimeter advertising in German professional football. Last spring, the technology was presented to the Bundesliga clubs at a joint roadshow by Lagardère Sports, Supponor, and ADI. At the match between Eintracht Frankfurt and VfL Wolfsburg on 6 May 2017, ADI, Supponor and Lagardère Sports jointly implemented virtual advertising live for the first time at a Bundesliga match – but without feeding the TV signals to the public.

Charlie Marshall, COO of Supponor, explains: “Following a successful process of collaboration and technology integration with the DFL and partners, we have now made audience-targeted perimeter advertising a reality in the German Bundesliga. Supponor has enjoyed working closely with the DFL, Sportcast and Lagardère Sports in Germany over the past 12 months and our technology has grown ever stronger with their support.

“It was of critical importance in choosing Lagardère Sports as our partner that they shared our vision to cooperate with all of the DFL clubs to maximise the opportunity for large-scale deployment of Supponor’s virtual technology to as many club partners as possible, regardless of their marketing affiliations. Everyone at Supponor is now looking forward to deploying our augmented reality technology to help drive the incremental value for our existing and new Bundesliga partners that come from delivering audience-relevant, high-quality virtual LED advertising.”

“The virtual advertising breakthrough has supposedly been imminent for more than 15 years now. We are therefore delighted that we have been able to further develop the technology together with our strategic partners Supponor and ADI in order to ensure that it meets the very high-quality standards of the DFL. We would like to thank the DFL for their close and trusting collaboration, and of course, also thank our partner clubs who supported us during the test phase,” explains Philipp Hasenbein, managing director of Lagardère Sports Germany.

“It makes us proud that we have once again been able to provide an innovation-driven impetus to the industry as part of this group. We are convinced that the use of virtual perimeter advertising will provide an enormous boost to the entire Bundesliga’s internationalisation efforts. As an international marketing agency, the technology enables us to create added value for both rights holders and sponsors. We support our partners in further shaping their positioning in their respective target markets and in reaching their customers with targeted and country-specific advertising.”