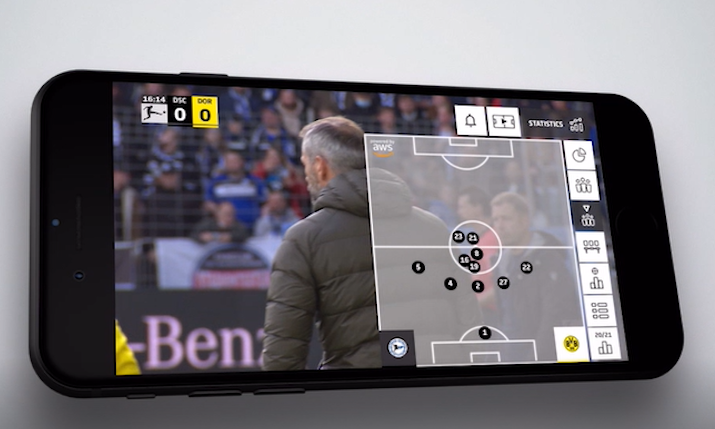 Recognising that personalisation is paramount to audience engagement, at the start of the 2021-22 season, DFL Deutsche Fußball Liga launched several fan-first offerings, many of which use Amazon Web Services (AWS). Among these is the league’s Interactive Feed, which is built on TeraVolt’s TVXray.

DFL’s Interactive Feed comprises more than six statistical widgets that feature information ranging from pictures and results to match facts and formations – including average positions and live rankings. Viewers can also access all match highlights, progress bar and multigame mode, so they can select games of interest, and sign up for desired alerts.

Throughout coverage of each live game, a database collects more than 40 match highlight clips, which are made available for viewers to watch on-demand via a fixtures and results graphic within its Interactive Feed. Each highlight contains its own relevance factor, allowing the viewer to quickly and easily find what they’re looking for, such as a goal that they may have missed. Viewers can opt to stay in a highlight browsing window or go back to the live version of the game.

“We live in a digital age in which modern fans crave interactive, personalised content experiences that mirror what they get from mobile apps. Yet, a mobile device isn’t optimal for watching live sport due to the small screen and encoded graphics,” said Dr Steffen Merkel, DFL executive vice president audiovisual rights. “Interactive Feed solves the small screen challenges, enabling us to capture all the data a viewer needs to follow a match and arrange it in a way that’s easily digested alongside live video coverage in one interface.”

During a live Bundesliga match broadcast, the Interactive Feed’s underlying architecture automatically detects real-time highlights, like a goal or an assist, using an algorithm that organises the data and makes it accessible to audiences as small icons in the timeline at the bottom of the viewport. Further allowing audiences to drive their own viewing experiences, clickable on-air graphics reveal statistical information about players and teams, ball possession and other tactical details, even from games outside of the current view.

Behind-the-scenes, these capabilities are enabled via a software development kit, which is layered on top of the provider’s online video platform, content delivery network (CDN), the video stream and front-end player or app framework. The transparent layer is integrated into a video player, and the solution then automatically synchronises the video and data to ensure a seamless viewing experience, which is all done using computer vision in AWS.

Developed in less than two years, the backend infrastructure powering the Interactive Feed is enabled by AWS services, including an AWS Relational Database layer. Amazon Simple Storage (Amazon S3) is used for publishing purposes and keeping state (a temporal property of a process) in an AWS Elastic Kubernetes (EKS) cluster, upon which the entire solution is built.

Data synchronisation, clickable on-air graphics and highlights are created using computer vision information. This infrastructure provides insight into the event, the necessary time code in and out, and the relevancy of each scene, so that they can be sorted for a range of needs. A built-in database stores key data points and assets, so clients can easily pull up player pictures and other statistics.

Amazon ElastiCache accelerates performance with microsecond latency, especially for compute intensive operations, and AWS Application Load Balancer automatically distributes incoming application traffic. One of the REST APIs is then cached by the Amazon CloudFront CDN, while the others are routed through directly.

Bundesliga started the Interactive Feed design and build with an empty canvas aiming to provide its media partners with a unique product that helps to meet the current demands of its customers, ultimately leaning on TeraVolt and AWS technologies to ensure optimal flexibility, scalability and the ability to distribute live content to a large-scale audience.

“We wanted to take a modern approach to this fan-first feature, and that meant we’d need top notch backend technology, as well as a third party to help with ongoing maintenance, which is why TVXray and AWS made for a smart choice,” shared Merkel. “The technologies worked as expected, and it’s been an incredible experience every step of the way.”

The workflow powering DFL’s Interactive Feed allows the league to make a range of information accessible to viewers at their fingertips and, at the same time, accelerates the rate at which DFL can innovate. As the league continues to advance the solution, the statistics supported will only continue to grow and allow DFL rights holders to better engage with audiences on a deeper level.