Sky Deutschland began the 2017/18 Bundesliga season on 18 August 2017 with its new sports production and broadcasting centre Sky Sport HQ. Through its own production site, Sky now offers the entire world of sport from a single source, such as live sports broadcasts, Sky Sport News HD on free TV and the new sports portal skysport.de. 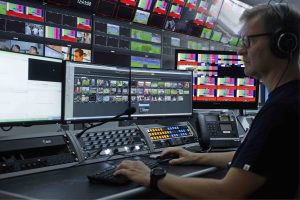 Sky’s new production and broadcasting centre, at the Unterföhring media site in Germany has one of the most modern and largest broadcast IT infrastructures for live sports in Europe. It allows the broadcaster to produce all sports content in-house and to distribute it via a wide variety of distribution channels – such as linear TV, OTT services and via web and social media portals.

Technological advisory in the development and planning phase, the design of the systems architecture, as well as systems integration, delivery and commissioning of the broadcast, production and IT infrastructure were carried out by ICT integrator Qvest Media.

Apart from ingest – with up to 60 EVS recording channels and the construction of an 84 sqm studio LED wall for analyses, graphics and game scenes – the new system landscape also has numerous technological innovations which, in this shape and size, are so far unique in Sky’s live sports production. Features related to the IP backbone, the studio and graphic workflow for augmented reality and coverage during conference productions mark a new era in live production at Sky Deutschland.

“Together with Qvest Media, we have prepared and implemented a detailed plan for the entire infrastructure – starting with essential core systems and workflows through to general, technical equipment and implementation within the facilities. This customised solution has helped us to greatly facilitate everyday production,” said Alessandro Reitano, Vice President of Sports Production at Sky Deutschland.

One of the central and most important workflows at Sky is naturally live sports production and the accompanying enhancement of live broadcasts with additional information and on-air graphics. Therefore, Qvest Media analysed and defined the necessary specifications based on Sky’s requirements.

In addition, various systems and applications from Vizrt are used in order to ensure a fast, comprehensive and robust studio workflow of the eight PCRs. Live signals – such as, in the case of Sky, for live football, tennis or Formula One broadcasts – are controlled through a touchscreen user interface of the Viz Mosart studio automation system. 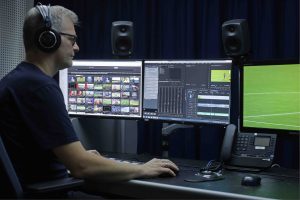 graphics during live productions. Close integration with the remaining graphics systems and applications, such as Libero, Arena and Multichannel from Vizrt, also provide a high degree of automation for graphic-supported analysis rooms and on-air integration of graphic elements. Using augmented reality, Sky is also opening up a new dimension by integrating graphic virtual elements such as a ‘virtual window’ for LED walls. The new technology uses tracked camera data to create perspective animations.

Due to future in-house productions and the increased amount of data this entails, Qvest Media convinced its customer to use an original media asset management system (MAM). All workflows are therefore based on the central MAM system, such as file-and-feed ingest, export functionalities, quality control and transcoding.

In this case, the installation of XT and XS live production servers from EVS provides up to 60 ingest channels and 76 live signals for the required capacity to manage incoming and outgoing content. “In this development process, it was particularly important to take Sky Deutschland’s pre-existing infrastructure into consideration and integrate it into the new overarching concept,” said Markus Heinen, Head of Systems Integration at Qvest Media. “The choice in the area of media asset management therefore was in favour of a system by Vizrt, not least in order to connect this to the existing Avid infrastructure,” said Heinen.

An additional feature that Qvest Media developed with Sky is the collaboration of production teams during live sports broadcasts. As a result, the Conference Area was created in an open area specifically designed for this purpose. This has more than 12 identically equipped production islands on which teams of three can each produce a live conference.

This is particularly suitable for the production of sports events which take place simultaneously at several venues, such as the Bundesliga or UEFA Champions League. Live feeds from the various three-person teams are switched to the running conference programme via the master control room, according to demand.

In addition to the conference in the main programme, the viewer is offered a choice of up to ten further sports meetings via the occasional channels as events-based broadcast channels through the use of an Occasional Channel Playout Room (OCPCR). Besides the ten occasional channels, Sky also has four 24/7 main channels, namely Sky Sport 1 HD, Sky Sport 2 HD, Sky Sport Bundesliga 1 HD and Sky Sport Austria HD. The Imagine Communications playout server is used for the four main channels and is controlled using Imagine ADC Automation.

On a technological level, the use of a real-time network based on a decentralised router for more than 1,250 Riedel MediorNet sources and sinks is also particularly remarkable. This is controlled by means of a VSM broadcast control system from Lawo.

The fibre-based IP backbone has almost 150 individual router nodes and is so far globally unique in this configuration level. Consequently, Sky has a high degree of flexibility and redundancy possibilities for transporting audio and video data and for processing tasks such as embedding and de-embedding in its entire production network.

An exceptional feature of this project is the integration of audio-over-IP networks based on Dante with audio production by Lawo. Qvest Media therefore ensured that the manufacturer was open to integration of the Dante protocol while avoiding the use of its provided standard protocol. 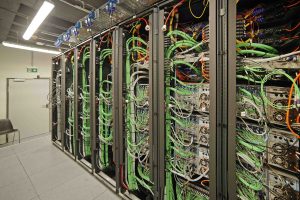 The central IT backbone uses 10- and 40-Gbit Nexus 7710 core switches from Cisco, complemented by Nexus FEX2248TP-E and Catalyst 4948 access switches. The infrastructure also has a 735 TB central Isilon storage solution and virtualised servers based on HP BL460c blade servers and VMWare vSphere6 with a block storage based on an EMC Unity 300F for using virtual machines and databases. Content is archived to a Quantum LT07 library controlled by SGL Flashnet.

After around ten months of construction, an intensive staging process and several live test productions, the ultra-modern system infrastructure was put into operation on 1 July 2017 in close collaboration with Sky and Qvest Media.