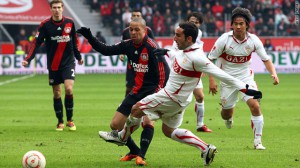 The 2.Bundesliga season kicks off today in Germany and, for the first time, all matches will be delivered to viewers by Sky in HD.

The 2.Bundesliga season kicks off today and while today marks a beginning it also marks an end as the standard definition era for viewers is officially over. “From this season on we broadcast all Bundesligar games in excellent HD quality,” emphasises Dirk Grosse, head of sports communication at the German pay TV operator Sky. So far, the host broadcaster Sportcast produced all Bundesliga games in HD but not all of the soccer matches were already aired in high-def.

Sky has transmission rights for the first and second  Bundesliga, with matches for the second Bundesliga broadcasting from Friday to Sunday. Various traditional clubs augur an attractive season 2013/14 and the opening matches see FC St. Pauli against TVS Munich 1860 on Friday, SG Dynamo Dresden against the 1st FC Cologne on Saturday, Greuther Fürth against Arminia Bielefeld on Sunday and Fortuna Duesseldorf against FC Energy Cottbus on Monday. There are already four duels between former Bundesliga clubs on the fixture list.

For the opening of the 40th season Sky reports on Friday from 6 pm GMT live and exclusively from the second Bundesliga. The camera set-up in the stadium has been developed by Sportcast, the host broadcaster for the Bundesliga, and the standard for the basic signal production of the 2.Bundesliga matches is called 6 + 1 and includes six HD cameras as well as one super slow motion camera that is located on the sidelines. Camera 1 and 2 are positioned in the middle of the grandstand and show the viewers what is going on before or behind the ball. They also shoot close-ups so that a foul and the reactions of the players can be seen more clearly. Furthermore, there are high cameras on the grandstand in the extension line of the 16 metre line that serve the important role of replaying offside offences. Two cameras behind the goals complete the traditional set-up for the the second Bundesliga. For the crunch meeting on Monday, which is aired by German free TV channel Sport 1 Sportcasts, provides an 8+1 camera set-up.

While the camera concepts basically stay the same, sometimes the reporting takes place completely in stadium but sometimes also in the studio. “Our conception varies from case to case,” explains Dirk Grosse, “because the implementations depend on the existing possibilities.”

Sky is also now making all the soccer games available live on mobile devices so that the fans don‘t miss a goal scored by their favuorite club or player. In addition to the web rights, Sky also secured the mobile rights so that the 2.Bundesliga matches are also available on iPhone, iPad and iPod Air via the mobile phone network 3G and 4G. “With our app Sky Go we offer our subcribers soccer in the pants pocket,” sums up Grosse.