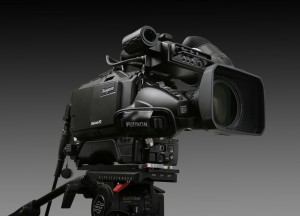 Ikegami’s HC-HD300 will make its first UK exhibition appearance at BVE 2015 in London next month. Introduced at BIRTV 2014 and now deliverable, the HC-HD300 is billed as a highly flexible docking-style camera for studio or field operation.

Supporting features of the HC-HD300 include the focus assist and lens aberration correction functions employed in Ikegami’s established UnicamHD range of cameras.

The camera can be operated under local control or in conjunction with a newly developed control system. This consists of an FA-300 fibre adapter and BSF-300 base station. Light in weight and compact in size (1.5RU), the BSF-300 base station is easily integrated into any studio, mobile truck, or portable flypack. When using a hybrid fibre camera cable, the base station provides power to the fibre adapter and the camera itself.

Also on show on the Ikegami stand at BVE 2015 will be the HDK-97 ARRI camera, jointly developed by Ikegami and ARRI. The HDK-97ARRI makes it possible to employ a large format sensor in a multiple camera operation. The result, claim the two companies, is a best-of-both-worlds image acquisition system ideal for use in multi-camera studio and field applications, including conventional broadcast camera operation and classic video operator control of multiple cameras.