For a regional show, BVE2016 in London had a lot of new product introductions, including quite a few of interest to sports production such as miniature and Ultra HD cameras, low-latency links, LED lighting, augmented reality, and IP production.

The new AJA RovoCam is a compact UHD/HD camera for remote applications that should be particularly simple to set up as it uses an integrated HDBaseT transmitter. HDBaseT carries power, uncompressed video, stereo audio and RS-232 control (up to 100m distance) over a single CAT 5e/6 cable and is common for Pro AV use, but hasn’t really been used for broadcast.

AJA is aiming it at sports and events coverage, and it is built around a Sony back illuminated CMOS sensor and image processing, offering UHD at 25/30p and HD at up to 50/60p. It works with the RovoRx-HDMI HDBaseT receiver, with HDMI video and audio outputs, and is also compatible with some third party receivers. It will cost about £2,500.

Z-Cam’s new £670 E1 is claimed to be the smallest 4K camera with interchangeable lenses (Micro Four-Thirds mount). It is a suitable size and weight (210g) for drone use, and records 4K at 24p, Ultra HD at 24/25/30p and HD at up to 50/60p, using H.264 to a micro SD card at up to 60Mpbs. It uses a Panasonic sensor, with Mini HDMI output, Bluetooth and WiFi, and can be controlled via a comprehensive iOS or Android app, including lens control and LUTs.

Its new high-speed video processor includes 16-axis colour matrix and focus assist, and it has a 40Gbps optical transceiver for full bandwidth UHD transmission between the camera and CCU, using uncompressed RGB 4:4:4 signals, plus dual HD outputs for prompter and talent monitor.

The UHK-430’s sensor and lens head can be detached and operated up to 50m from the camera body. In future, the optical block will be replaceable with an optional sensor assembly for high frame rate or 35mm 4K. It ships in April, along with the new CCU-430, SE-U430 system expander, and a choice of three viewfinders. 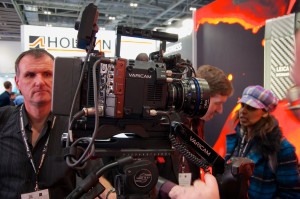 Panasonic launched its new VariCam LT at BVE. It offers the same image quality and high dynamic range as the VariCam 35, but in a smaller, lighter body for a lower price (£13,000 +VAT, body only). It has three central processers, compared to five for the 35, so can only shoot 4K at up to 60p (10-bit 4:2:2), whereas the 35 does 120fps and 12-bit 4:4:4. However, the LT can do a Super 16 crop of the Super 35-sized sensor, to do 240fps in HD or 2K. It comes with an EF lens mount, and users can remove the IR filter for night shots. Other new features include: V-Look, a blend of V-Log and video that allows filmic documentary acquisition without the same need for intense colour grading; hot swap power; and image presets as scene files.

JVC announced a 120fps high-speed recording upgrade for its GY-LS300 4KCAM handheld Super 35 camcorder. This will be available via a free firmware update in April.

Arri was demonstrating a new multicam function for its Amira, allowing its image parameters to be controlled from a Sony RCP-1500 remote control panel. It is part of the recently released SUP 3.0 firmware upgrade and requires connections via Ethernet cable, a fibre convertor or wireless links. 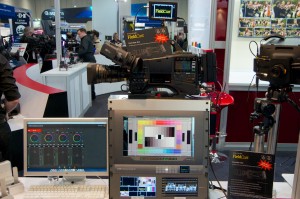 Many small OB vans have adopted Blackmagic Design’s low-cost ATEM hardware, but it can only control Blackmagic’s own cameras as it sends control data over SDI. However, the new FieldCast Controller One will overcome this, and allow control of cameras and lenses on JVC cameras (including zoom), Panasonic (which it showed on the Holdan stand at BVE), and soon Sony. FieldCast hopes that it can add Canon and others shortly.

The prototype consisted of two boxes, but the final product will be a small V-mount unit on the camera that will loop SDI out and de-embed the remote control data, converting it to a serial signal for camera control.

It should be available in July, will include fibre-to-SDI conversion, and should cost less than £1,200. Protocols will be available as free updates as they add them, and the box will automatically choose which to use. 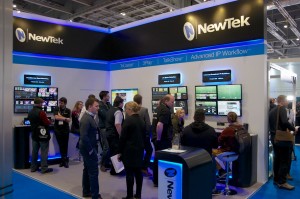 NewTek’s upcoming NDI (Network Device Interface) is a new royalty-free open standard for live production IP workflows, which it showed running on a TriCaster 8000 and the new TriCaster Mini. It will allow users to send and receive real-time, frame-accurate video from cameras and devices in different locations on a standard network, and connect to any Dante-enabled devices for audio.

NDI’s Advanced IP Workflow capabilities will allow for an additional four inputs – which can be cameras or any supported video source on a LAN. Users can have all source inputs be IP-based if they choose or mix IP sources with local SDI sources. The updated version of TriCaster Advanced Edition software will be a free upgrade.

Also new is the Paralinx Tomahawk, a 600m-range zero-delay 5GHz wireless SDI or HDMI link, which can be used with up to four receivers with 10-bit HD.

From audio to Hot Head control

Glensound’s new £350 Mini Cub is a miniature USB audio interface for broadcast with a single XLR input and Referee input compressor to avoid peaks and clipping. It has a heavy-duty housing, with DSP and micro controllers for system control, with 24-bit 48kHz digital audio, an equivalent input noise (EIN) of 121dB at line up, and return stereo headphone monitoring.

TSL’s new MPA range of entry-level monitoring systems will include versions for MADI (available now), Dante and Hydra2 (both by NAB), and Ravenna (probably by IBC). There will be two versions of each: Solo, which is “very simple, very easy to use,” and good for links trucks, OB tail boards or head ends; and Mix, which allows users to create a custom mix. All will come with a built-in web server, giving a live view in a browser of all channels, enabling a remote user to find faults, control routing, assign names, do configuration and network set up.

The Dante units will be AES 67 compliant, as there is a lot of demand for this, especially from OB companies in the US, while the Hydra2 is a Calrec proprietary protocol carrying up to 512 channels of audio over Ethernet, and will allow people to listen to what is on that cable without needing to have a Calrec desk. 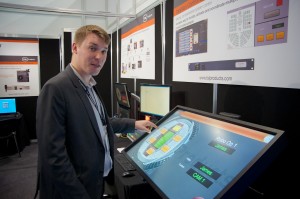 TSL’s new TallyMan Virtual Panel can be used to control almost anything that can route (mixers or routers from all the major manufacturers), so a simple compact router with no intelligence could be used to create an emergency changeover system with a cut bus. “We can do ganged signal routing across manufacturers, so can do audio follow video, 4K in a 3G infrastructure with HD proxies following,” explained Dan Bailey, product manager. “It creates a simple interface to a complex system, and can aggregate pretty big systems into a small interface.” It can also limit people’s control, just presenting the operator with those things they need (or are allowed) to access. “Limiting control is as important as controlling everything.”

The new Virtual Panel works on any Windows’ machine, and is completely user customisable (drag and drop), just import any images. “You can create you own bespoke control surface,” he said. As an example, they built a Hot Head operators position for multiple operators that takes minutes to set up, saving a lot of time on site.

Avid’s new Media Composer 8.5, which supports HDR and up to 64 audio tracks, represents a major change for the software, with a new, simpler, more responsive interface. Editors can quickly group and sync clips based on their audio waveform, with live timeline dragging. Avid also demonstrated Cloud Collaboration for its upcoming Pro Tools 12.5 audio suite, which will allow users anywhere to collaborate on a project as if they were in the same studio.

Ncam, and its partner Vitec Videocom, demonstrated live augmented reality systems for placing virtual graphics elements into sports or news coverage. The Ncam Live 7D system provides six degrees of freedom in camera tracking (X, Y and Z space, plus pan, tilt and roll) using a sensor bar attached to the camera, allowing for handheld use. Adding zoom, focus and aperture settings from the lens means that the precise field of view of the camera can be calculated. Users include BT Sport and Major League Baseball.

It also launched new PTZ software for low-cost camera tracking when the camera is on a fixed mount and only pan, tilt and zoom are required.