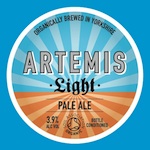 IBC marks the debut of Artemis Light, the newest member of Calrec’s Artemis family of Bluefin2/Hydra2 audio consoles, which adds a new, compact 4U processing rack to the range. Like all Artemis consoles, Artemis Light incorporates Bluefin2 High Density Signal Processing and Hydra2 networking technologies in the same compact yet extremely powerful and scalable control surface used by Artemis Shine and Beam. Employing the same hardware and software architecture, the Artemis Light can be fully integrated with any existing Hydra2 network. And, even better, Calrec has brewed a special pale ale to celebrate.

“No sacrifice has been made to quality, reliability or specification. This is a powerful, full-featured broadcast-production audio console with full redundancy, designed to be an integral part of the Bluefin2/Hydra2 family,” said Henry Goodman, Head of Sales and Marketing at Calrec. “Full compatibility with other Hydra2 networks means the Artemis Light is scalable beyond its stand-alone capabilities, providing a cost-effective platform that can be easily expanded if production environments become more demanding of resources.”

The Artemis Light router has 8 x Hydra2 ports for interfacing with the extensive Hydra2 I/O range, as well as other Hydra2 routers and their I/O. The flexibility of the Hydra2 I/O range means a large amount of I/O can be connected in various formats, tailored to the specific needs of each environment.

As with its larger siblings, Artemis Light provides comprehensive EQ and dynamics on all paths, as well as large resources of audio delay, direct and mix-minus outputs, inserts, and more, all in a compact card size dedicated to the Artemis light DSP package.

More to the point, though, the company has celebrated the launch of Artemis Light by having its own beer brewed. Sue Cooper and Wim van der Spek own the Little Valley Brewery in Cragg Vale, just outside Hebden Bridge where Calrec is based, and have produced a light ale brewed with floral cascade hops. According to the tasting notes, Artemis Light has hints of orange, spice and citrus, giving a dry, bitter finish. They’ll have some on the stand, but it might not last long. Form an orderly queue now…