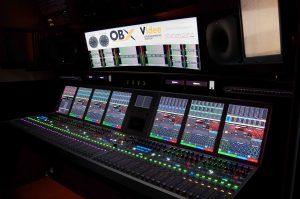 Calrec has renewed its Gold Sponsorship of SVG Europe, saying the association’s “proactive and clearly targeted” approach is important for the company’s ongoing success.

Dave Letson, Calrec VP of sales, commented: “We all know that our industry is continuing to evolve at a rapid rate. The move to IP – AoIP specifically in our case – is ongoing. But there are clear challenges before we reach true interoperability, challenges that we are helping address on a daily basis.

“That’s why organisations as proactive and clearly targeted as SVG Europe are so important, in terms of in-depth articles and news as well as networking opportunities, panel events and seminars,” he noted.

Letson went on: “Our work with NEP at Wimbledon 2019 is a prime example of recent sports success. Viewers around the world enjoyed premium quality audio while watching the tournament with NEP UK deploying 15 Calrec consoles at the South West London tennis venue, alongside extensive Calrec networking and routing technology and I/O boxes. An additional three Calrec consoles were used in NEP OB trucks that covered Centre Court,

Court One and Court Two. The overall video and audio network was a mix of IP and traditional.”

For more than 50 years broadcasters have relied on Calrec. As this industry adapts to new viewing habits and evolving commercial environments, Calrec is helping broadcasters to stay ahead as they switch to IP infrastructures; to achieve efficiency with remote broadcasting; and to save money with virtualised production.

Calrec’s radio-focussed and flexible Type R can adapt to a variety of requirements including headless, and Calrec has expanded its range of consoles, from the cost effective Brio consoles, to the IP-enabled ImPulse core.