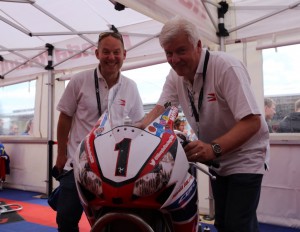 The renowned Isle of Man TT has been described as the world’s most dangerous motorcycle race and each year more than 40,000 spectators crowd the tiny island to attend the thrilling two week event. For the many racing enthusiasts who cannot make the journey, every key piece of action is captured on camera and televised on ITV4 within hours of the chequered flag being waved.

The 2014 event, which commenced at the end of May, included arguably the greatest line up of teams and riders ever seen at the competition, with the award winning coverage provided by television production company, North One Television. Covering the races for television is a huge logistical challenge: the 38 mile track spans the island’s public roads and with this year’s lap record in excess of 130mph, capturing the riders’ movements is no mean feat.

The broadcast industry’s leading supplier of speciality camera systems, Camera Corps, part of Vitec Videocom, supplied its specialist equipment and experienced crew to provide on-board images from the race bikes, side cars and FX shots from around the circuit.

Paul McNeil, projects manager, Camera Corps said: “Preparation is key to the success of this project. We work very closely with North One Television and the TT event management team in the months leading up to the event, when the bespoke on-board cameras are being designed and manufactured. It is crucial to ensure that the fitted cameras do not hinder the bikes’ performance and to minimise the chance of any damage to the cameras during the high-speed race.”

McNeil explained: “All of the main roads around the island that form part of the race track are closed to the public on race days – there are positions around the course covered by standard broadcast cameras with operators along with a helicopter camera. The rest of the content is captured by our staged cameras and on board systems. We have a team on site every day, three crew in the pits and two fitting the staged cameras.

“As long as the positions are accessible and declared safe by the clerk of the course, we rig the equipment in the best possible places to achieve the most creative shots. That could be at the top of a lamppost or from a wall in somebody’s front garden. The most iconic shot is captured by the kerb cams at the bottom of Bray Hill, an image that is well-known to hundreds of thousands of motorcycle enthusiasts around the world.” 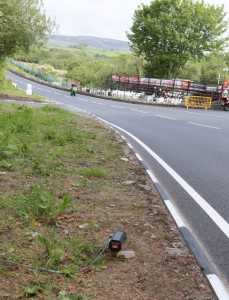 One of the many challenges of covering the Isle of Man TT is the weather as the races will not go ahead if conditions are damp or wet. The starting times are frequently delayed so the fixed stage camera systems must be flexible enough to be able to cope with changes to the race schedule.

McNeil added: “Any rain anywhere on the circuit means the race could be cancelled or postponed. If we pushed the go buttons on our staged cameras an hour before the race was due to begin and it was subsequently delayed, the camera would then run out of capacity on the recording media.

“As a result, we developed a system exclusively for the TT events that has a built in phone and can be controlled by text messages. The systems are rigged around the circuit on the morning of the race and these can be controlled throughout the day from our main base – we simply text it the letter ‘r’ and it goes into record or the letter ‘s’ to stop recording. Fortunately this year only one day was rained off, but we still had ultimate control over the systems, regardless of what was happening with the weather.”

At the 2014 event, which took place in late May and early June, Camera Corps supplied five of these staged special effects cameras covering 14 different positions during the race week. The main part of the speciality mini cam coverage comes from the on-board cameras; this comprises thirteen Point of View (PoV) HD camera systems rigged on the race bikes. Like the stage cameras, these were specially designed for the conditions encountered on a road race environment.

McNeil said: “These systems are built into the bikes to give the action shots from the riders’ PoV. One of the logistical problems of the TT is that the systems have to be installed over classes of race bikes within the days racing, which is where the expertise of our crew comes in.

“The race teams trust us to fit our equipment correctly without impacting on the performance of their precious machines. You really have to understand how the race works to do this job – all of the specialist crew members we use in the pits have mastered the service and management of this event over many years, in fact, one of team is a legendary rider who won a race previously and others are trained superbike mechanics, so familiar faces the riders trust puts them and the teams at ease. To complement the on-board coverage we also fit a secondary camera to capture the rider’s faces during the race and effect shots such as gear change and shots of the hand on the throttle or even a rear facing PoV.”

Another production challenge at the Isle of Man TT is that the television programme covering the races goes out on ITV4 at 10pm each night, which places additional time pressures on editing the footage.

McNeil said: “There is a very tight turn around and we have to ensure that we get the footage from each race back as quickly as possible. Our systems use media cards so as soon as the race finishes, even during the Parc Ferme, our team is allowed to retrieve the card media ready for the edit. We also train the event marshals around the circuit to retrieve and change the solid state media so it is ready for the next race. The previous race footage is then rushed into the course car and taken to the main site so the footage can be added to the edit.”

The final system that completes the set of speciality equipment is the camera corps mini zoom camera that has been adapted to operate on a handheld mast pole recording onto a body worn recorder. This operates behind the refuelling area alongside the pit lane to give a shot over the race bikes when they make their stop during the longer races. Using this specific system, enables several different teams to be reordered during the course of the race.

This year’s coverage of the event was deemed to be a great success. “The Camera Corps team at this year’s TT are all familiar faces who have contributed to the North One coverage during the last six years. The team did a great job under very testing conditions, delivering outstanding footage,” said Robert Gough, head of production, North One Television.

Now the race organisers and the North One team are currently exploring how to innovate for the future and are evaluating the possibility of covering the event live at some point in the future. In the meantime, the Isle of Man is gearing up for its next major racing event, the TT Classic, which is due to take place at the end of August and will be covered by several of Camera Corps on-board systems and some familiar faces.

McNeil concluded: “Covering the event live would certainly add technological and logistical challenges for our team and one we’d like to be part of. However, in the meantime we are continually working on decreasing the size of our camera systems, to allow them to integrate into the bikes of the future, especially as the models get smaller and more lightweight. Innovation is the key to creativity and whether the event is live or pre-recorded our equipment will be perfectly positioned on site to capture every piece of action from the race.”