Can social media make the move to becoming a primary distribution platform? 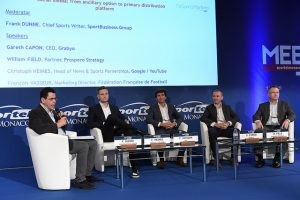 Social media’s role as a primary distribution platform was the topic of discussion at a panel session at Sportel Monaco last week. And while it seems that platforms like YouTube have been around forever Christoph Heimes, Google/YouTube, head of news and sports partnerships, reminded everyone that the video platform is only 11 years old. Oh…and it also now has 50 million channels of content.

“YouTube has grown to attract different types of creators,” he said. “Some build complete businesses on shoulder content with no in-match footage. And the clubs, like Chelsea and Arsenal, are making the most of interviews, coverage of training, and more.”

Google/YouTube is at the centre of many streaming efforts and the company does provide information like when a piece of content is viewed, how long people watched, and what advertising was served against the content.

William Field, Prospero Strategy, partner, said that while social media is currently seen as a way to engage with fans and make content more relevant the rights holders are beginning to recognise that monetisation via social media lies ahead.

“What they really want is monetisation but if you take something like football there is a complex picture with leagues and clubs and there are tricky boundary issues,” he explained.

Rights owners, he added, are relaxing some restrictions for live rights to allow for use on social platforms closer to the live window. Social media is here to stay so the attitude, increasingly, is allow properties to invest in the platforms.

Francois Vasseur, marketing director, Federation Francaise de Football, said that the FFF first launched on Facebook in 2011 and its primary objective at the time was marketing and to tell stories without the need of the media.

“Five years ago our relationship with the fan involved having to talk to the media,” he explained. “And now we have insider content that our fans love.”

Vasseur said that YouTube is perfect for telling longer stories as people don’t switch away while Facebook is ideal for short-form programming.

As for whether or not social media platforms will ever become primary and exclusive outlets for live sports content Field says the possibility is there as rights owners will sell the rights to whomever pays the most.

“The elephant in the room is brands as tier two or three [sports and brands] can go online and have an ad revenue share,” said Field. “But I am not sure the brand community has done enough and woke up enough to social media.”

A perfect example of the power of social media and sports is ‘Tie Break Tens,’ a new tennis format that features 10 first-to-10 point tiebreaks. Recently held in Vienna, Gareth Capon, CEO, Grabyo, said the event was streamed live on Facebook, Twitter, YouTube, and Instagram and nearly 750,000 people watched it on Facebook.

“But the page it was on only had 2,000 people liking it and that shows the potential of social platforms for distribution,” said Capon. “The value of different types of content is changing and increasing. But more importantly someone can tell someone else about the content while there is nothing inherently viral about TV.”

The big issue is still the disparity between TV and digital revenues. The music industry went through a massive transition to get to a point where digital is the primary driver of music sales. But for sports larger events, like a Super Bowl or Olympics might need to be ad supported while other sports would look to pay TV. Smaller sports, without an installed fan base, will quicken the pace of change with respect to revenue models.

“We are entering a period of huge uncertainly and volatility as OTT is a threat to the traditional TV business model and social platforms will continue to take a lot of attention away from sport,” added Field. “The key thing is that it is becoming harder and harder to keep people’s attention. The real battle is for attention and using the tools to do that and feed the money machine that is sport.”

One issue with respect to digital advertising is that brands will quickly disengage from certain streaming sites when audiences wane.

“The brands go elsewhere because the conversation is elsewhere,” said Heimes. “Underarmour, Nike, and others are creating their own content because they have better relationships with the players and can shoot their own content and get it on YouTube. They are not waiting for the Federation. Adidas, for example, is one of the biggest brands on YouTube.”