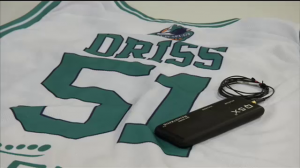 Q5X microphones were used on players to capture in-game action.

The Canal+ Group is the broadcast rights’ holder for the Pro A, the French Basketball Championships’ Premier League. During the game between Pau and ASVEL on Saturday 22 November, the group’s sports channel, Sport+, introduced major innovations for this type of broadcast.

A large-scale setup worthy of the NBA

For the first time on European hardwood courts, two Pro A (French Premier League) players Sami Driss (team captain of Pau) and Edwin Jackson (shooting guard for ASVEL) were fitted with Q5X microphones. A dedicated camera was also used to film the two players in particular.

Thanks to a specific LSM video editing solution, the images and sounds were then broadcast (with commentary) during timeouts and half-times. The aim of this novel system is to enable viewers to see the match in a different way right at the heart of the action and also to ensure that they do not miss any feedback from players. The microphones were imported from Canada and are the same ones that were premiered in NBA games. Made from a flexible material that is sturdy and waterproof, they are inserted into a pack that is sewn into the players’ jerseys in order to allow for total freedom of movement.

The dedicated LSM system installed in the Extender 1 OB truck providing continuous recording ensures that the 4K IMOVIX offers the same flexibility as a traditional super slow-mo camera. It is now one of the only super-slow motion cameras on the market that can be connected to the broadcasting camera setup, allowing for live broadcasts in addition to the replays.

In addition, its de-noising and de-flickering technology removes noises and subdues flickers caused by strobe lighting.

In a press release Canal+ stated: “ The Canal+ Group is very pleased to use new technologies as part of its ongoing commitment to offer increasingly immersive and innovative techniques. These are groundbreaking innovations that confirm Canal+’s interest in Pro A and its excellent partnership with the National Basketball League.”