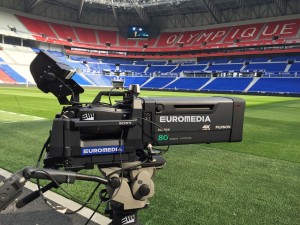 A total of 12 cameras were used to capture the Olympique Lyonnais vs PSG match on 28 February.

After the initial 4K production of the Monaco vs PSG match that took place last September, Canal + has lately repeated the experiment – albeit with a somewhat modified technical set-up – for the Olympique Lyonnais vs PSG match on 28 February. To undertake this new test broadcast, the French pay TV channel again joined forces with Euromedia France.

However, unlike the Monaco-PSG match, 12 cameras were used to shoot the footage in native 4K this time around, and there was no upconverted HD footage source. According to the service providers, this constitutes a ‘first’ in Europe.

The cameras used by director Mohamed Hassani, who was in charge of the production and broadcasting, comprised 11 Sony HDC 4300 cameras (including two cameras mounted on cranes) equipped with Fujifilm (UA22, UA80) and Canon (J12, J22) lenses. There was also a Superloupe 4K camera belonging to Digital Video Sud, a subsidiary of Euromedia. To carry out the slow-motion replays there were six LSM EVS servers and Sony PWS4400 equipment.

Euromedia currently has no less than three UHD units in its fleet of OB trucks. C42, the mobile production unit used to produce the match, was equipped with a Snell Advanced Media (SAM) Kahuna Maverick control panel and switcher as well as Sony BVM X300 type monitors.

The 4K feed was broadcast both inside the Lyon Stadium (on screens loaned by Samsung) and transmitted via satellite directly to the Canal+ head office situated in the Parisian suburb of Boulogne. For the occasion, 70 Canal+ subscribers were drawn at random and invited to watch the historic live broadcast.

The 4K production of this match officially sealed the service provider’s agreement with OL Image (Olympique Lyonnais’ production organisation), which has selected Euromedia to design and handle the new production and broadcasting services for the OL TV channel that is entirely devoted to the Club activities and match replays. OL TV is available via major internet service provider boxes in France and directly on the Internet.

Lionel Vialaneix, the president of Euromedia, comments: “Shooting this match in UHD format is further proof of the company’s ability to provide technical support for the innovative projects of our clients. I would also like to mention that Euromedia carried out production tests in HDR (High Dynamic Range) mode at the same time and the results are very promising.”

As a matter of interest the team from Lyon was the first one to break PSG’s unbeaten run this season, on the 27th day of the Championship. It was also the first occasion on which the new Grand Stade de Lyon stadium – which has been selected as a host venue for the 2016 UEFA European Championships in June – has featured a 4K production.