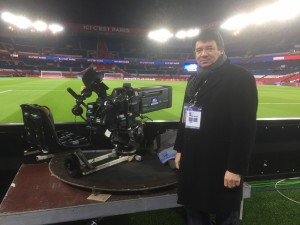 Once again, the pay TV channel sector in sports broadcasting has been working to expand its 4K offer to the public. From 29 January, the Ligue 1 football match aired on Sundays at 9pm will be entirely produced and broadcast in native UHD.

Orange fibre subscribers who own a 4K screen can already watch Canal+ in UHD resolution. In the course of the year, the channel will also propose a decoder for customers who use other operators.

Today the UHD version of Canal+ is upconverted if the programmes are not in native 4K mode. Besides films, series and documentaries, the main focus will be on sports programmes. Normally the Formula One season will be a hybrid UHD/HD production, meaning that there will be both native 4K and upconverted HD feeds, but the Ligue 1 headline match produced by Canal+ will be in full UHD.

François-Charles Bideaux, sports production director for Canal+, explained: “All 15 Sony 4300 cameras deployed around the pitch are equipped with 4K Canon or UHD Fujinon lenses. They all shoot in this format. Two SteadiCams are placed on the sidelines and connected by cables to prevent wireless latency issues, [which can still be] too high in 4K. And lastly this is the first time we have eight EVS UHD servers (i.e. 16 channels) available for the slow motion replays.”

For the ultra slow motion replays, a subsidiary of Euromedia based in the South of France called DVS developed and produced the two systems in use. Incidentally, one of the Euromedia Group’s OB trucks, Car 21, is used to produce these premium matches.

“For three full weeks our Car 21 was used exclusively to work on switching from 4K-ready mode to a full UHD version. Onboard we have a Grass Valley Kayenne K-Frame switcher and SAM Glue & Sirius 840 router. As we signed a deal with Canal+ for several regular events and not just the occasional production we were able to make the necessary investments,” added Gaël Tanguy, Euromedia’s technical director.

Even though cameras were placed slightly lower in the stands to reduce the foreshortening effect on players and to benefit the most from the format’s depth of field, Laurent Lachat, an experienced producer of French football coverage, still has to shoot in a similar way to HD production at present.

“The transition has to be gradual as the viewer needs to become accustomed to a new type of image; we cannot make the changes all at once,” Lachat declared to the journalists present that evening. This is particularly the case because only one signal is produced now; a double-production with feeds in both HD and Ultra HD is no longer necessary. In fact, the UHD signal is downconverted for broadcasting on Canal+ HD, which apparently seems to yield an even higher quality image than a native HD production.

“Our next major innovation namely in terms of the viewer’s immersive experience will be the use of HDR mode and Dolby Surround sound. Concerning rugby, we will offer 4K coverage of one of the Top 14 matches on the Sunday evenings when there are no Ligue 1 matches,” concluded the Canal+ sports production director.