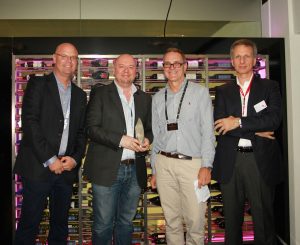 Blazej Klacansky, Channel Development Manager for Broadcast and Cine Lens at Canon, comments: “For the third consecutive year, we are honoured to once again support the prestigious SVG Europe Awards as a demonstration of Canon’s commitment to the field of sports and the live production broadcast industry. Canon’s heritage and investment in continuing to drive innovative products is pivotal in empowering our customers to deploy creative solutions that exceed viewers’ expectations.”

The Sport Production Awards, to be held on 14 September, will honour outstanding production and technical achievements in the field of broadcast sports from the last 12 months. For the first time, the Awards will be presented in a specially-produced ceremony to take place at the end of the Sport Production Summit at the DeLaMar Theatre in Amsterdam.

Two days later, the Sport Production Summit Awards Networking Evening – also sponsored by Canon and taking place at the RAI from 6-8pm – will provide the perfect opportunity to take a social break during the frenetic week of the IBC conference and exhibition, as well as the chance to establish new business contacts and renew old ones. 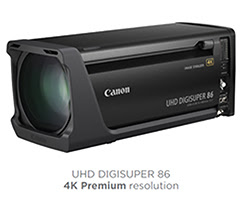 At this exciting and challenging time for the world of broadcast, Canon’s innovations are continuously shifting to meet the fluctuating needs of broadcasters, and Canon‘s 4K Premium and 4K standard 2/3″ broadcast lens series are testament to this, says Klacansky: “Sports production continues to go from strength to strength and remains at the forefront of technological innovation in broadcast industry. As demonstrated over the past twelve months alone, the industry is only going to get more exciting with the likes of 4K and HDR, and Canon is proud to play an integral role in addressing and building on our customers’ needs.”

From lenses to monitors, Canon has it all.

Out on the show floor at IBC, Canon will reflect the increasing momentum behind 4K with a comprehensive showcase of its professional imaging range – from input to output. Among the products on display will be the new 4K/UHD entry into the Cinema EOS range, the EOS C200, as well as the CN-E70-200mm T4.4 L IS KAS S and the CN-E18-80mm T4.4 L IS KAS S.

Klacansky notes: “With the continuous changes in shooting styles, technology advances with 4K and HDR, and a growing appetite for immersive entertainment content, Canon is committed to providing the industry with the best enablers possible to maximise the creative opportunities. “

The CN-E70-200mm T4.4 L IS KAS S cine-lens and the CN E18-80mm T4.4 L IS KAS S are just two of Canon’s compact cine-servo versatile lenses being showcased in Amsterdam. Designed for professional and advanced amateur videographers using large-format, single-sensor cameras, these lenses unlock the creative freedom to take advantage of 4K, integrated servo control and effortless switching between several subjects in a single shot. They ensure that video can be captured with the greatest possible precision and quality.