MRMC has been providing robotic systems for Sky Sports’ coverage of the PDC Darts Championships for four years, writes Steve Boland, MRMC Broadcast Director. During the 2013-2016 seasons the robotic systems were used in elevated positions which operators could not access directly. Control of camera moves was extended to a backstage position where the operators could use encoded pan bar systems to simulate the function of manually controlled cameras.

Working closely with the production and technical facilities teams over the years, MRMC was able to adapt features that helped enhance the camera operator’s coverage. Providing pre-set functionality allowed the operators to quickly get to a position on the dartboard to keep pace with the play. 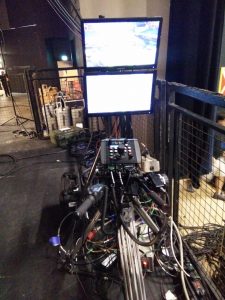 Prior to the 2017 season, Sky looked to MRMC to provide a control solution for the two main match-board cameras. To date, these positions have been manned consisting of pedestal camera supports, full-sized fibre camera channels and 72x/86x box lenses. These positions require operators with a great deal of experience and skill to move quickly and accurately around the dartboard whilst using a high degree of lens magnification.

The challenge for MRMC was to design a control user interface that could provide this high level of match coverage, but using camera operators with little knowledge of the sport or the specifics of the positions. The solution needed to be completed within three weeks. Working closely with Sky Sports Production Director Andy Finn, the full range of shots for each camera position were mapped out.

Andy’s deep understanding of the sport and exceptional production knowledge allowed us to assemble a workshop test environment that emulated the live production. This allowed us to establish an invaluable feedback loop to ensure every stage of the development was meeting the demands of the application.”

The development was multi-faceted requiring a transition to a robotic model as well as designing a user interface specific to each camera position. The existing camera and lens configuration was generating too much flex when applied to the high-speed robotic moves required for the camera positions. To resolve this, Telegenic (outside broadcast supplier) provided Sony compact cameras with fibre converters allowing the robotic positions to be integrated with the multi-cam production.

Reducing the physical footprint of the robotic positions was made possible by feedback from the on-going tests of the shots. Having defined all the shots required for each camera, this then allowed each shot to be stored as a preset in MRMC’s control software ‘MHC’.

Because the precise camera positions were known for each fixture, the zoom positions for each shot were tested in advance. Due to the precise repeatability of each shot, this led to a reduction in the size of the lenses from 86x s and 72x to 2 x 40x ENG-style lenses.

According to Mike Ruddell, Sky Sports Head of Technology, “Reducing the footprint of the production technology is always welcome. Along with the associated efficiency this brings, it often helps with the fan’s visibility of the sport at the venue. But such reductions cannot compromise the quality of the production. A smaller footprint without the loss of quality, coupled with the precise repeatability of camera moves, provides us with a consistent product which is a value add for us.”

Getting cameras around the board, ahead of each throw

The unique aspect of darts TV production is that the operators have to position the cameras in advance of the play. As darts can be an extremely fast sport this means getting cameras around the board using very tight zooms, ahead of each throw. This requires a high level of skill and synergy between operators and the TV director. “Maintaining this production synergy was essential to accepting any technology changes,” commented Andy Finn, “the robotic user interface had to allow that synergy, which is crucial to achieving the high-quality international darts coverage Sky produce and to continue unimpeded by new methods of camera control.” 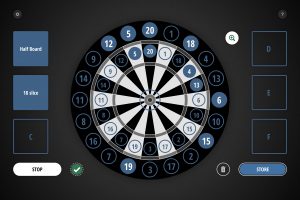 of the UI. Camera 2 required 27 different shots of the dartboard and camera 3 required 44. The darts application allowed us to personalise the UI, not only for darts generally, but also for particular camera positions within darts. By making a direct correlation between the subject and controller, it made sense to use a graphical representation of a dartboard as a skin.

The speed of motion between pre-sets is programmable allowing for each shot to have unique speed characteristics. As a pre-set is selected the graphic for that area of the board changes status to confirm to the user the request has been activated.

The UI is presented on a 27” touchscreen display with each active area of the board equal to three times the size of the user’s finger touch area. This allows for a confident selection of the area in a fast-paced live production environment. Larger ancillary buttons are available outside the board area to provide programmable pre-sets for the most commonly used positions.

Treble Top: Getting the close-up shot

One of the most difficult shots to produce is the camera 2 treble 20 push in. This move is used live on air when the darts player scores two treble 20s with his first two darts. Before dart 3 is thrown the camera zooms in from a wide to a tight position, framing the treble 20.

The difficulty is the shot is framed offset to allow a split screen view of the dartboard to the left and the player to the right. The zoom in requires this offset to be maintained throughout the push in. 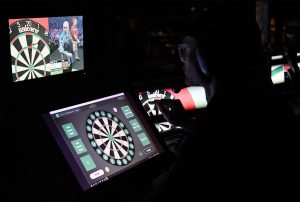 So rather than a linear zoom, there is a small fraction of pan and tilt required during a much larger move of the zoom range (equal to 2 degrees of pan and 90 degree of zoom). This is a demanding shot for an operator and takes many years of practice to become almost a muscle memory function to repeat.

To provide this shot the MRMC team designed a lens configuration table within the MHC darts application that linearises the relationship between the small pan and tilt motion with the larger zoom motion. This creates a straighter line shot between the offset wide and tight shot, enabling a highly accurate and repeatable shot to highlight this dramatic section of the production. The skin also provides a touch area for creep zooming, allowing the operator to emphasise dramatic moments when a player repeats throws for a double and the cameras alternates between a slow zoom on the players face and a slow zoom on the area of the board he is aiming for.

The MHC control system also allows for hardware controllers to be attached as USB devices. The darts system uses a joystick panel with full manual control of pan, tilt, zoom and focus allowing the operator to re-adjust shots on the fly and move to other areas on or off the board.

The system is also IP-based allowing the operator to be positioned at any location (globally via the internet) with full control of the camera head. Each robotic position receives power via UPS units allowing for up to 10 hours of uninterrupted power ensuring stored positions are not compromised through failure.

At time of writing, the MHC darts systems had been used for 16 weeks of consecutive PDC Premier League Darts and the World Cup of Darts in Frankfurt. Using camera operators that have little previous experience of darts production, the systems performed to the highest technical and production standards throughout each of these events.

By removing the difficulty of manually creating these shots and the technical learning curve of a new system, the operators are able to immediately focus on the speed and synergy of the production environment which is this secret of Sky’s highly successful coverage of PDC darts. 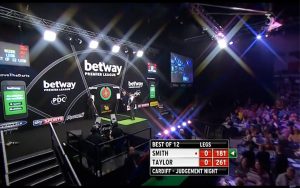 By removing the difficulty of manually creating shots and the technical learning curve of a new system, the operators are able to immediately focus on the speed and synergy of the production environment

creative functions of traditional manned camera positions, the benefits of being in a soft design and learning environment can be further adapted to enhance the coverage of the sport. The style characteristics of individual darts players such as the speed of throws can be tailored to adjust the response of the presets creating a more dynamic relationship between the subject and camera.

The software can also be easily deployed for training purposes, allowing for a greater pool of operators to learn the system without the need of transporting specialist equipment. As the system is IP-based this also allows for future remote production applications without the need for any workflow changes.