There’s no rest for the weary at CBS Sports, and that’s just the way the team likes it. Fresh off a down-to-the-wire AFC Championship Game in New England on Sunday January 21, the team embarked on the first of 23 golf tournaments — 21 of them PGA TOUR events — last weekend in San Diego. In total, golf fans can expect more than 155 hours of coverage this year, including the Masters Tournament and the 100th PGA Championship, and plenty of technical enhancements.

“We’re all still coming off that incredible high we had with the Patriots-Jacksonville game,” says CBS Sports Chairman Sean McManus. “We had a great NFL season and a great SEC Football season, and now we’re transitioning to both golf and college basketball.”

This year, CBS Sports will use Toptracer by Topgolf ball-tracking technology on 10 holes — up from four in 2017 — for every PGA TOUR event. The technology also enables second and third shots to be traced wirelessly. Virtual Eye will provide tracking graphics and statistics within a 3D model of each hole while also showing the tee shots. Says McManus, “This is a significant breakthrough for us. We can also use Toptracer on second shots from the fairway, which is a good innovation.” 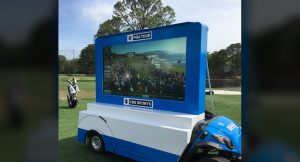 SmartCart will be deployed for analysing and telestrating golf swings and shots, hole difficulty, and more

After debuting SmartCart in 2016, CBS Sports plans to deploy the technology on 20 events this year. Reporter Amanda Balionis will use SmartCart to analyse and telestrate data like golf swings and shots, hole difficulty, and scorecards, as well as to show compelling content from the event. SwingVision will also return this year, and a blimp will be flown during selected events to provide an additional aerial view.

“I think, as the technology has evolved, all the networks have creatively tried to figure out how it can improve the understanding of the way the shots are being hit and how they’re playing out,” says McManus. “On certain holes, the blimp does a really good job of that, and Toptracer is a new and improved way of doing that, [too]. You see exactly where the ball is in the fairway; you see exactly where it is with respect to the hazard on the specific hole and exactly where it is in relation to what the next shot is going to be.”

In addition to the planned technical tools, CBS Sports intends to experiment with green technology for putting, bunker cams, enhanced audio, and drone technology. But, according to McManus, the network won’t lose sight of what matters: the event itself.

“The basic pictures of the golf course from our cameras and the basic announcer commentary is the foundation of our coverage,” he says. “The new technology just has a different way of showing what’s happening on the golf course and is something that viewers are becoming more and more used to seeing.”