A future-minded show like CEATEC is never short on its share of interesting new prototypes, space-age technological pipedreams, and, of course, robots. The 2012 edition of the show just outside Tokyo last week was no different, offering a glimpse into the future of consumer electronics and, to a degree, a guide for where live-production technologies need to go in order to serve next-generation consumption devices. 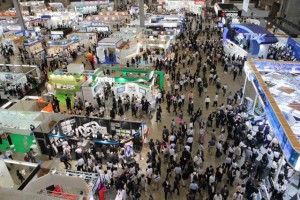 Several major players in the consumer-electronics game — including Panasonic, Sharp, Sony, and Toshiba — rolled out massive 4K and 8K sets, most of which are months or even years from market.

CLICK HERE for a more in-depth look at SVG’s coverage of the CEATEC 2012 show.

The talk of the show was most definitely the lineup of 4K (3840×2160 pixels, four times the resolution of 1080p) and 8K (7680×4320, eight times) displays. Despite the recent financial struggles of several Japanese electronics stalwarts (especially where TVs are concerned), a quartet of major CE manufacturers appeared poised to take the next step in the evolution of their TV businesses by showcasing 4K and 8K sets.

Sony will release its 84-in. BRAVIA XBR-84X900 4K TV later this year priced at $24,999. Toshiba’s 84-in. set, powered by its REGZA CEVO Engine 4K, will be available during the first half of next year. New Sony CEO Kaz Hirai stressed that his company are still committed to the TV market and see 4K sets as a potential long-term solution in turning around its recent struggles.

The others, however, were less willing to lay down a timeline for availability. Panasonic exhibited the prototype of a 145-in. 8K plasma display featuring NHK’s Super Hi-Vision content and several 20-in. 4K LCDs, while Sharp showcased 4K sets based on its ICC (Integrated Cognitive Creation) technology, which it says can “reproduce the cognitive process by which the human brain interprets light stimuli in natural scenery” to create a more lifelike image.

Though not at the show, South Korea’s LG has unveiled an 84-in. LCD TV for $20,000 that is expected to start shipping worldwide shortly. In addition, Hitachi was conspicuously absent from the TV game, opting not to show displays at CEATEC for the first time on the heels of its continued struggles in that market.

Although each display was impressive, the real sizzler was located at NHK’s booth, where the Japanese public broadcaster set up two Super Hi-Vision 8K demos, one with stereo audio and the other with SHV’s full 22.2 multichannel surround sound. The queue to experience this breathtaking SHV demo often ran all the way around the booth.

The Ultra-Hi-Res Elephant in the Room: An Absence of Content

The buzz created by these Ultra HD displays was palpable throughout the halls of Makuhari Messe, but the fact remains that 4K and especially 8K remain years away from anything close to mainstream adoption.

For one thing, content is scarce at this point. Even with a growing number of 4K cameras hitting the market (such as Sony’s F65) and the film industry warming up to the format, broadcast content — especially live sports — is likely still years away.

That said, a recent report from Credit Suisse forecasts that five 4K channels will be launched in Europe in 2013, growing to 135 by the end of 2017. In addition, the bank says that rollout and adoption of the 4K format is likely to be speedier than that of HDTV.

Meanwhile, NHK plans to start testing 8K broadcasts by 2016, with wide-scale 8K broadcast tests in 2020. This summer, the format took a big step forward when NHK worked with Olympic Broadcast Services (OBS) and the BBC to produce and deliver  several hours of the 2012 Olympic Games in SHV to theatres in Japan, the UK, and U.S.

However, even with increased broadcast content, set manufacturers will still have to persuade consumers, many of whom just recently made the costly jump to an HD set, to go out and buy these oversize, expensive displays. According to a report released by IHS iSuppli Television Market Tracker last week, consumer demand for 4K sets will remain negligible for the foreseeable future, with shipments accounting for less than 1% of the global LCD TV market during the next five years. The report projects that worldwide shipments of 4K LCD TVs will rise to 2.1 million units in 2017, up from 4,000 in 2012 but still only 0.8% of the market.

The conclusion for sports leagues and broadcasters? Although sports content will most certainly help drive adoption of 4K and 8K, the format will likely be limited to big-ticket events like the Olympics and World Cup for several years.

Nonetheless, several broadcasters are already using 4K cameras and production tools to enhance their HD product (see Fox’s “Super Zoom” feature during its NFL coverage), a sign that 4K sports productions are closer than many believe.

As with the gradual adoption of HD, the sports-production industry must keep a close eye on the continued development of 4K/8K, in order to be ready to jump into action once fans catch on (and the price of the displays goes down).

Spreading the Cloud
There was much more on display at CEATEC, however, than just hi-res displays.

As has been the case at pretty much all tech trade shows over the past year, CEATEC was thoroughly covered by the cloud. Major tech giants and small startups alike offered cloud-based technologies that allow users to store and access content in the cloud via myriad devices (TV, computer, tablet, handset, and more).

A prime example of this multiscreen push could be seen at Sony’s booth, where the company demonstrated examples of cross-device connectivity among Xperia tablets, Blu-ray disc recorders, and nasne TV tuners. Users can watch recorded or live TV content on an Xperia tablet via a home network or transfer recorded content onto the Xperia tablet for viewing on the go.

The Energy Issue
The most prevalent theme at the show was surely energy-efficiency. Dozens of vendors introduced energy-efficient appliances and technologies with an eye to the energy-strapped nation of Japan, which faces an energy crunch following the March 2011 earthquake and tsunami and subsequent nuclear crisis.