With a wave of 4K and 8K television sets making the rounds at trade shows and slated to hit the market soon, it is easy to forget that there is still a serious dearth of 4K content available to consumers today. At the CEATEC show near Tokyo this week, companies like Panasonic are ramping up the excitement surrounding these technologies with eye-popping demos of 4K and 8K sets. 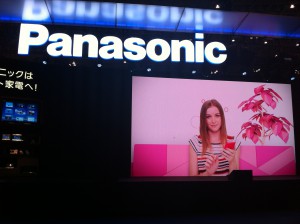 However, like many of these manufacturers, Panasonic is taking a wait-and-see approach to developing 4K and 8K production technologies that could be used to create this content, a chicken-and-egg conundrum that could be hard to crack anytime soon.

“We are already developing 4K cameras, and we showed a concept mock-up at NAB, but we are just starting and haven’t decided how far we want to go with that,” says Takashi Kurama, manager, Marketing Group, Professional AV Business Unit, Panasonic. “The biggest reason is that most of the broadcasters and producers are not ready [to produce 4K]. Maybe, for cinema, it’s ready, but not for broadcast. Maybe in two years.

“You can see the 4K displays all over the place here, but they don’t have tuners and can’t carry [broadcast content],” he continues. “After SMPTE or [other standards bodies] decide how to deliver 4K, then we will really study how to deal with 4K. But, right now, we are just researching. The display side is different, though.”

For its part, Panasonic is showcasing a 145-in. 8K plasma display featuring NHK Super Hi-Vision content, as well as several 20-in. 4K LCDs.

Although 4K may be in the offing, Panasonic is most definitely deep in the live-3D-production business, having just come off a massive 3D effort at the London Olympics. The company provided the bulk of the gear — including three OB trucks, 20 3D rigs, and 30 ENG cameras — to help Olympic Broadcast Services produce and deliver 300 hours of 3D programming to 20 countries, making it the most widely distributed 3D television event ever.

And the move has apparently paid off: Panasonic has seen a substantial increase in demand for 3D production gear since the Olympics concluded.

“The market was slow before the Olympic Games,” says Kurama. “But, after that, many of the production [companies] wanted to have this 3D capability. We definitely saw a rise [in demand] for 3D equipment [after the Games].

“I think sports will be a driver for 3D here [in the Asian market],” he continues. “I think, after many people experienced the Olympic Games in 3D, they realised just how good sports in 3D can be. Maybe that helped people want new content for 3D. Most of the higher range of TV sets have a 3D option built-in even if the [consumer] never uses it. But I think the Olympic Games made people realise that they could use that option and want to see more 3D.”

Few parts of the globe are seeing as rapid a growth in 3D-production business as China, where broadcasters are ramping up their 3D efforts to appease an almost insatiable demand for 3D content.

“The Chinese market is very big for 3D,” says Kurama. “The Chinese government wants [the public] to have 3D right now, so many broadcasters want to buy 3D camcorders right now to produce that. And even HD — China is still making the move to HD. It is a very big market for us right now.”