Provider of broadcast technology services, Timeline Television provides facilities to major broadcasters including the BBC, ITV and BT Sport. The company is the home of Tara Scott, technical edit assistant at Timeline. 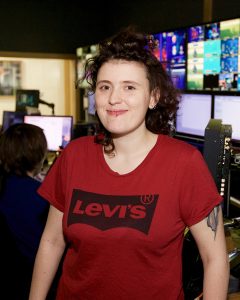 Although she is still in the early stages of her career, Scott has gained a wealth of experience, and has strong views of how to improve gender diversity within sports broadcast and beyond.

Scott began working as a technical edit assistant at Timeline, based at BT Sport in Stratford, London, in May 2018. “The main challenge I face in this role is it being a more customer-facing role than I am used to,” she notes. “We deal with technical issues as and when they arise, and part of the role requires talking to people in a confident and knowledgeable way. I struggle with confidence, particularly in regards to speaking to, or in front of people, however I continue to try and build upon this, and already feel my confidence increasing.

“There are many things I enjoy about my role here; I landed here as a result of pursuing my goal of working as an editor. I am in the perfect position to continue to work toward my goal of Avid Offline Editing, and I work with Avid everyday and I’m continuing to grow and develop both personally and professionally. I also feel both encouraged and supported by those I work with, and overall I get a great sense of satisfaction in this role. I like the fast-paced environment, and as we work with fast turnaround programming, there is often a lot to keep you busy with in the working day. As I prefer to work in almost chaotic environments I would say that the quiet periods are my least favourite aspect of working in sports broadcast,” Scott says.

Her path to Timeline has not been a smooth one, however. Her first job role came easily, but after that it became harder. Comments Scott: “My first role after university was a stroke of good luck; I sent an email with my CV after having contact details passed on to me. Within a few days I was in Longcross Studios working on Exodus Gods and Kings.” 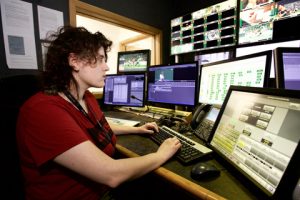 However, as the film was already far along in the production, the role was short, and after this she struggled to find more work. She freelanced, volunteered, and continued to look for full time work.  “I never gave up, and eventually I found a job in Shoreditch, working for Shorts TV. I moved to East London to be closer to work as commuting from Shinfield to Liverpool Street was expensive and exhausting. I managed to build on my career, and before long I had moved on to Sky.”

Scott’s aim has always been to edit, specifically Avid offline editing. She says that through each role she has taken in her career she has sought different things, while continuing to move forward to her ultimate goal. “As I moved from Shorts TV to Sky, I was looking for more financial stability. I found Shorts TV to be an incredibly friendly environment, and a great place to work, however as a small company the wage was low and the contracts were only offered on a six month rolling basis. I found myself struggling to afford my rent, and was looking for security after having a series of infrequent freelance positions.

“My next role after Sky was something I fell into by chance,” Scott continues. “I thoroughly enjoyed my time at Sky. I worked with a fantastic team of people, and gained invaluable knowledge and experience during my time in this role, however I began to look for a role closer to home as our working hours were changing so frequently it became unmanageable. I went to see my housemate after a job interview as she managed a pub nearby and began talking to a couple of women who were next to me, and ended up giving them my card as they had said that they were looking for someone to create online videos for DEFRA. I didn’t think much of it at the time, however I eventually got a call, and later a job offer. I stayed in this role for around 10 months, when the funding for the department was reallocated, which happened at the perfect time as I found the role I am currently in at Timeline TV.”

There have been many challenges along the way, Scott states. “I struggled with being underpaid, and even not paid in regards to some of my initial freelance positions. I initially struggled to find a permanent role, and when I finally found this, the pay was so low that I struggled to afford my rent. From my perspective, I believe there are multiple aspects to the struggles I had faced, but I feel the main factors were timing and being a woman.”

The 2008 recession played a part in Scott’s struggle to find permanent, well paid work. She states that, “I saw this create a situation whereby young people were being exploited”. With unemployment at a high and the use of zero hour contracts, she says, “there was a huge struggle for many to not only find work, but to find consistent, regular and stable work”.

“I feel that some companies exploited this situation by using loopholes to get the most out of their staff with minimal cost to the company, even using the governments work placement scheme to take on staff without pay and with no intention of offering full time employment,” she explained.

On how being female has added to what she has faced in the workplace, Scott comments: “Another aspect of my struggles I believe is not only as a woman, but as a woman who does not fit in to society’s expectations of what a woman should be. I feel there is less value placed on the experience and ability of women, and that we are taken less seriously, particularly in certain industries and roles that are perceived as male roles.

“I overcame the challenges I faced by determination; I have never given up despite my circumstances. I have consistently tried to maintain a positive outlook. I also see positivity in every circumstance and situation. Even through bad times in life, or negative situations, there is always something positive to take from it, even if it is just a learning experience or to retrospectively recognise your own strength.”

Scott’s advice to students studying today and looking to get into sports broadcast is to never give up. She says the important thing to do initially is to look for work experience and volunteer, even if not in the exact industry or department you want to get into. “Showing a proactive attitude, determination and willing to utilise your time shows a lot to a potential employer,” she says. 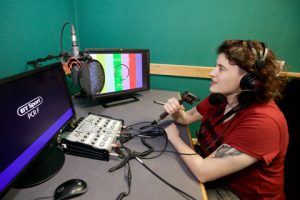 Scott adds: “While I was unemployed, I took on work experience as well as volunteering for a local charity aimed at helping people with disabilities, mental health issues, homelessness and addictions by involving them creatively and providing skills, and equipment, to make videos. The work I edited wasn’t going to help me get in based on quality, but I do believe doing this helped me as it showed motivation and determination. It also helps, if you do find yourself in periods of unemployment, to feel a sense of accomplishment, and keep motivation.”

“The practical experience I have gained from my experience in previous job roles has been of a huge benefit to me. As a creative, my main focus was on utilising tools in order to create, and the technical knowledge I gained was as a result of wanting to reach an understanding of how best to use these tools, such as software, to reach my goals. My previous technical roles in TV have given me much more confidence in my understanding of the technical aspects,” she says.

For women in sports broadcast, the issues faced in the workplace are the same as those for women in any male-dominated area, Scott believes. Her view is that change can only truly come from changing the way children are conditioned to accept gender roles. “My view is that the problem is much wider than any one male dominated industry,” she explains. “That being said, I do believe that there are changes we can make in individual areas, but I think that there needs to be a wider understanding of the causes, rather than just concentrating on the solutions.

“I feel that the structure needs to be looked at from a socialisation aspect. With all the arguments both for and against, I seem to see a lot of arguments that conclude that our biological predisposition is the cause for there being male dominated, and of course female dominated careers; that men like tools and tech, and women like caring for others, it’s “just how we are”.”

Scott hopes that by understanding the social aspect, there will be more understanding that both men and women are conditioned by this system. “My argument is that we are socialised from a very young age to fit into societal expectations of what our roles are as women or as men,” she continues. “From the toys we play with and the clothes we wear, from what we are told and conditioned to think what is appropriate for girls and what is appropriate for boys, we are formed to believe that these rigid social roles are what define us, and stepping outside of those boxes is frowned upon by society at large. Even if we have much more open minded families, we are still conditioned in this way by our external environments.

“Even if we do not see ourselves doing it, we all are capable of subconsciously undervaluing women in male dominated industries. To take a step back and look at the external factors, rather than the internal, would allow more people to see the effects our shared environment has on our society as a whole, and further, on specific sections of society, such as career paths,” she states.

She concludes: “For me, I believe we should continue to talk about these issues, to continue to question the reasoning and conclusions regarding the lack of women in certain positions, to open the discussion so that people can begin to understand their own subconscious position regarding the role of women in society. I also want to learn to develop myself, to build upon my own confidence so that I may be able to discuss these topics in a much more articulate way, and to a wider audience.”