London-based football club Charlton Athletic FC has deployed LiveU to enhance the experience for its fans, streaming a variety of live content on its website and to screens in its football stadium, The Valley. The technology was supplied by LiveU’s UK partner, Garland Partners. 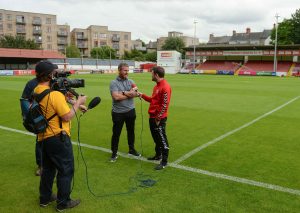 The League One club, formed in 1905, has a proud history in the English leagues. In mid-2017 it launched a new website and as part of that, it brought video production in-house. Wanting to drive traffic to the site, and increase fan engagement, the club’s aim was to be able to stream live, high-quality match coverage – as well as other events – from remote sites to its followers using multiple cameras.

Steve Adamson, audio visual content editor with the club, said: “When we launched our new website last year, we wanted to cover our pre-season, first team Ireland tour and we also wanted to be able to stream Under 18s, Under 23s and women’s gameswhen they got into finals later in the season. We looked at a couple of options, such as taking a remote studio to the ground where matches were being played but that’s costly and reliant upon both space at the ground and the connectivity available.”

Charlton turned to LiveU, knowing that other clubs had successfully used the technology. It was also aware that it would allow them to achieve their aim of remote, multi-camera productions with the vision mixing and additional production carried out at The Valley. The first team pre-season tour of Ireland was covered using two crews: two camera operators and a supervisor in Ireland with a director, vision mixer and replay operator back in the stadium in London. The LiveU portable transmission units feed a LiveU server, which in turns feeds a NewTek Tricaster and, via a router, a replay machine.

Adamson said: “LiveU really came into its own towards the end of the 2017/2018 season with the Under 23s games because we got into a cup final that we streamed; there were also two women’s team finals that we covered. We also streamed an anti-racism day at The Valley with a carnival procession that included local children, live to fans in the ground. We are able to get a multi-camera streaming set-up for a very cost-effective price. Using LiveU absolutely brings high-quality live video into the reach of clubs like ours. We are currently looking to increase the coverage of all of our teams including the U23s, U18s and women’s team and are looking for partners to come on board for all of our streaming services.”

Ronen Artman, VP of marketing, LiveU, said: “One of our aims has always been to bring the use of premium quality, live video to those for whom it has been impossible or hugely expensive before. We have continued to expand the scope and flexibility of our product range, especially for the sports market, and it’s examples like Charlton Athletic’s use that show how successful we continue to be in doing that.”