The coming together of traditional TV production techniques and traditional cinematic techniques continues. Increasingly, sports production professionals are turning to tools that historically were the preserve of big-screen cinema. 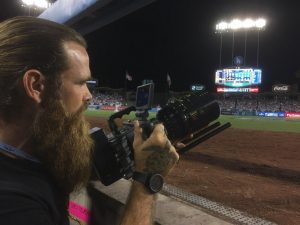 The latest to make the move? Tom Wells, director of photography and owner, Technician Films, who has been part of the World Series on Fox for nine years and finds himself increasingly working with things like anamorphic lenses to tell the story of a sports event in new ways.

“When we started, we were shooting standard player interviews before the Series starts, chopping up the interviews for the next week,” he said. “Now we are shooting ENG with the camera of the moment to capture cinematic slo-mo footage from the sidelines that can be used interstitially.”

The images become part of the in-game bumpers, vignettes and features seen throughout the broadcast.

“In those moments,” Wells explained, “our goal is to take the viewer from the technicals of the game itself and into the human and emotional side of it. We are gathering those elements constantly, and we have only a few seconds here and there, so what can we do to separate those moments from the broadcast in a way that enhances the broadcast?”

One method is to use cinema-grade cameras and lenses, including Arri Alexa and RED cameras coupled with Cooke Optics anamorphic lenses. The use of anamorphic lenses has been enabled by improvements in the conversion of anamorphic material to the 16:9 aspect ratio required for broadcast.

“Previously,” said Wells, “it was difficult to integrate large-format cameras into the broadcast quickly because of the large file sizes associated with them and allocating the time needed to re-crop and adjust the images was just about impossible. But we collaborated on the workflow with the editors and can now shoot widescreen to further enhance the cinematic and theatrical feel.”