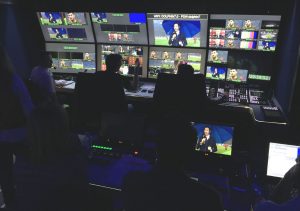 Onboard Dolphin 7.0 during Milan-Juventus at the TIM Cup Final 2018

For the third consecutive year Italy’s Cinevideo undertook all filming for the RAI customisation surrounding the TIM Cup 2018 final between Juventus and Milan, which took place on May 9 at the Stadio Olimpico, Rome. The production made use of the new Cinevideo OB truck, Dolphin 7.0, and a total of 8 HD cameras, among other equipment.

In addition, complete HyperMotion replay capability was provided for Infront, as well as two UltraEmotion systems from Cinevideo for capturing Hyper Slow Motion 4K. The mobile vehicle also controlled the operation of a small Polecam with PICO micro camera by Antelope that also delivered high-speed capability. In total, then, were therefore three high-speed replays: the two UltraEmotion cameras that worked at 500 FPS and the Polecam Antelope.

In practice, Dolphin 7.0 is two mobile vehicles in one. It was created by Cinevideo on Tomassini Style bodywork in Perugia and was developed to accommodate up to 24 UHD-HDR cameras, meaning it is equipped to cope with the demands of the most elaborate production.

Andrea Buonomo, owner and technical manager, confirms: “Bringing two HyperMotion systems to a Tim Cup final, then making it similar to a Champions League Final, means enriching the tv production a lot. In fact, usually only one system is used on these games, but being a final we reached an agreement with Infront to offer the best that is currently on the market.”

On behalf of Infront, the two HyperMotion systems were placed on hi-lo, a sort of raised revolving platform, produced by Egripment and used with Canon 95x lenses. These were positioned in the back goal with the Polecam system mounted behind the right goal.

The two cameras involved in the replays followed the game and shooting details of the match, including players in closeup and particularly dramatic moments. Thanks to its compact size, the Polecam with mini-jib could get ‘inside’ the goal, in the mesh of the net.

The Polecam filming was realised in collaboration with Movicom Italia, which specialises in aerial shooting systems. 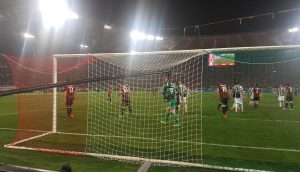 Polecam enabled Cinevideo to capture some exciting shots from the net

Meanwhile, for the RAI customisation, eight HD cameras were distributed in various positions, including: at the pitch view studio at the top of the stadium with presenters’ backs to the playing field; an interview station in the field; another interview station in the mix zone section; and a VIP station that was used for interviews with various personalities, including the President of the Republic. A camera was also deployed to follow the match and provide customised images of the players – a resource that proved useful during subsequent editing of content.

These eight cameras were under the supervision of director Vincenzo Belli onboard Dolphin 7.0, while ingest was achieved via a pair of EVS XT3 servers.

Intrinsically flexible, Dolphin 7.0 can be used in two primary mode – one being to perform host broadcaster functions and customisation for specific broadcasters, and the other as a single gallery for the most demanding events. There is also scope to reorient one of the galleries for hospitality – something that happened during Milan-Juventus, with the RAI editorial team gathered onboard the vehicle.