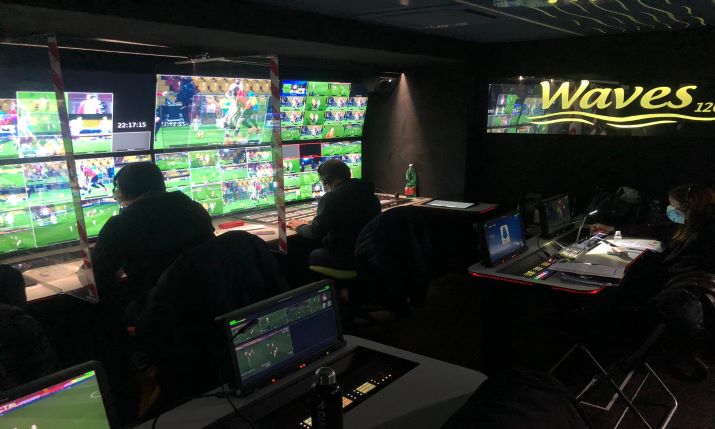 Aret managed both the build and system integration of Waves 12G, which is designed to work with Dolphin 7.0 at all levels – audio, video and intercom – to increase the potential on productions where two main control rooms and two backups are needed.

Waves 12G is a 14-metre, three-axle trailer equipped with double expansion, which creates a work surface of about 60 square metres in operational mode. To be able to deal with multiple events at the same time, it provides three separate entrances for technical and artistic staff: Tecnica, Regia 1 and Regia 2. 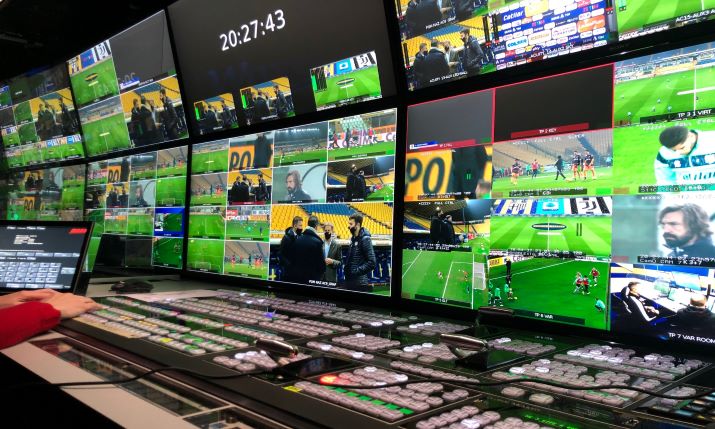 Waves 12G is a 14-metre, three-axle trailer equipped with double expansion, which creates a work surface of about 60 square metres in operational mode

Andrea Buonomo, Cinevideo technical director and executive sales manager, explains: “The technological heart of the new Waves 12G is the most advanced the market can offer today. It is entirely made to support current processes in 4K and even beyond in the future thanks to 12G SDI; it is a no compromise realisation.”

Initially scheduled for launch last June, the project suffered heavy delays in construction due to the pandemic. A first test was carried out on 7 November 2020 for the Parma versus Fiorentina Serie A match broadcast live by DAZN. However, today’s (23 February) official launch coincides with the date set for the European launch of Ross Video’s Ultrix-Acuity video mixer which has been implemented onboard Waves 12G.

The 12G Ultrix-Acuity video mixer was chosen because all the on-board technology operates in this format. Ultrix on board matrices have up to 152 12G 4K inputs and outputs. Until now, even when operating with a high-end mixer equipped with 160 inputs, these inputs were reduced to 40 when working in 4K, with a further reduction of resources such as mix effects, RAM recorder, and keys.

Buonomo resumes: “This Ross Video mixer, which has its first official implementation in EMEA with Cinevideo, was born from a very innovative perspective. It is native to 4K and was created for this format. In a 4K production we will not have to reduce the available resources since it comes with four 4K effect banks, six keys for each effect bank, 3D DVE 4K and up to four RAM recorder fill/keys for each effect bank usable on the whole system (16 RAM recorder fill/keys in total). Each effect bank can be split in two to get eight 4K banks.

“Until yesterday we did not have adequate machine computing capacity available and therefore we had to manage resources in the best possible way.”

Everything on board is double and redundant, including the double audio gallery and double video gallery. Many technological gems have also been adopted. Among them are Riedel’s new Artist-1024 IP matrix for intercom and two audio control desks from Calrec, an Artemis and a Brio.

The slow motion and production server section adopts EVS equipment; all monitoring is by Sony including the latest addition, the Sony 4K PXW-2400 HDR monitor. HDR conversion is performed by the Sony HDRC 4000 production converter unit. 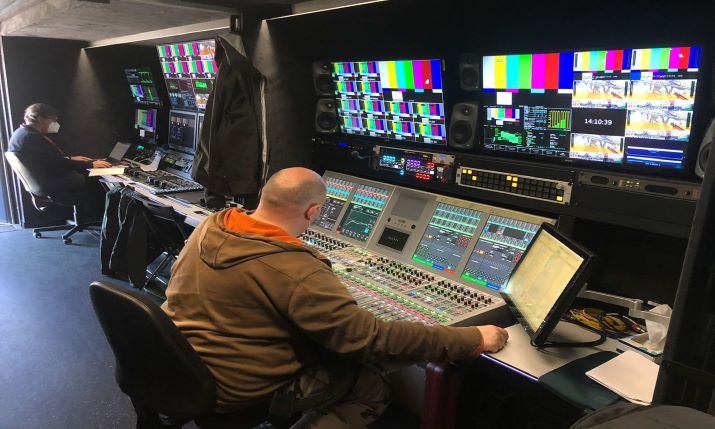 Waves 12G has been created with 12G technology at its heart

“De-embedders are provided on all the inputs and embedders are on all the outputs up to 16 audio channels each, as well as a number of flexible licences for a 12G frame syncroniser to be assigned to inputs as needed.

“Thanks to Ross Gator-Sync systems, on the cameras we can create delays in 4K for the insertion of virtual advertising. This procedure, which is now carried out in HD, was much more difficult to carry out on a 4K signal. In addition, Ross Gator-Sync gearbox cards allow us to perform frame syncronisation and delay of four 12G signals for each card, up to 79 frames in HD and 14 frames in UHD.

“All Sony 4300 cameras are licensed in 4K and are 3x slow motion; two of the cameras on board are licensed to shoot 8x. Cinevideo is well known for its expertise in hyper slow motion up to 2000fps, and we still provide UltraEmotion systems on all the most important Serie A matches.”

The Waves 12G OB vehicle will be in action tonight at the Champions League match at the Olimpico Stadium between Lazio and Bayern Munich as a 4K integration for Sky Italia.