Clique TV creates a new generation of programming with Dyvi

French media group Canal+ has launched Clique TV, a channel dedicated to providing a voice to artists, in association with Première Fois Productions.

For the creation of its original content, the new channel worked with facilities provider BOB in France to deploy an EVS Dyvi live production switcher.

“The content that Clique TV distributes – in format, topic and genre – is specifically created to appeal to the next generation of television viewers,” said Julien Hua, Clique TV’s head of production. “The way this programming is created is reflective of this target audience and takes advantage of the latest in new production technologies.” 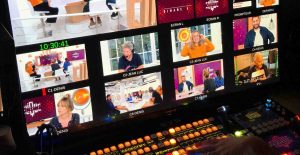 The Dyvi switcher from EVS was quickly selected because it features a software-defined architecture that helps the producers create rich and diverse content as efficiently as possible. The new French channel produces various magazine and talk shows on music, video games, sports, literature and current affairs, as well as documentaries and comedy sketches.

The team uses Dyvi to create graphics and production layouts ahead of going live. And then saving those to the system using macros, they’re able to recall configurations in an instant making switching between set ups quick and easy.

Before the roll out of the new channel, one of its most-watched programmes, Clique Dimanche, was broadcast on Canal+. Directed by some of France’s most renowned directors, including Serge Khalfon, Didier Froehly and Nicolas Druet, it was the popularity of this first iteration that led to the media group seeing the potential in rolling out an entire channel dedicated to a generation of digital natives.

Talking about the production of the programming, Serge Khalfon, who’s also the co-artistic director of the show, said “when producing Clique Dimanche, we benefitted from Dyvi’s ergonomic panel and the speed of operation it allows. This new switcher is perfect for the shows that we produce at Clique TV.”

The channel’s technical facilities, into which Dyvi has been integrated, are provided by BOB (Boîte à Outils Broadcast), a french company of broadcast facilities and services. Its general manager, Cyril Mazouer, said about the switcher: “For the production of Clique TV’s original programming, Dyvi was an obvious choice. The limitations of traditional switchers meant that once the team started using Dyvi, they didn’t want to go back.”