In May, France TV, in partnership with the French Tennis Federation, launched France TV Sport UHD 4K, a new channel that provided 24-hour coverage of Roland-Garros in 4K HDR. The channel was considered a “culmination of nine years of experimentation,” according to Frédéric Brochard, CTO for France TV. Available for free during the 15-day tournament, France TV Sport UHD 4K is expected to be used for future sports coverage, such as the 2020 Summer Games in Tokyo. 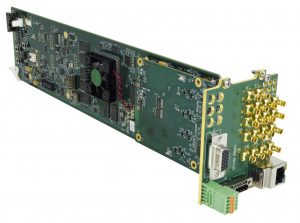 Cobalt’s 9904-UDX-4K up/down/cross converter hardware is in use by France TV for UHD and HDR sports coverage.

To capture 4K HDR footage of matches at the major tennis court, France TV used 14 4K cameras, plus two up converted HD cameras in the net for slo-mo. Both an international HD feed and the UHD feed were produced simultaneously during the tournament.

For France TV Sport UHD 4K, the HDR footage was captured in HLG, but converted for distribution to HDR10 (PQ). As a result, downstream encoders could transport Technicolor’s SL-HDR2 metadata to home devices, allowing for optimised HDR viewing based on the individual display’s capabilities. HLG to HDR10 conversion was completed with the Cobalt Digital 9904-UDX-4K up/down/cross converter hardware and powered by Technicolor software.

France TV is the latest broadcaster to use the Cobalt/Technicolor solution as part of its workflow to produce 4K HDR imagery for live sports. NBC Sports Group used it in 2018 to deliver all seven home games of the Notre Dame Fighting Irish American football team’s 2018 season in 4K HDR for AT&T DirecTV subscribers. Unlike the French Open, the football games were produced on site in 1080p and up converted live to 4K HDR using the 9904-UDX-4K in the mobile production truck.

The 9904-UDX-4K eliminates the need for sports productions to use separate SDR and HDR cameras and processing paths, because it allows production truck operators to leverage legacy SDR sources such as cameras, servers, and graphics systems in HDR productions. Technicolor HDR ITM technology delivers sharper, more realistic images in real time. While it allows manual adjustments on the fly and the use of preset profiles, its dynamic adjustment capability enables an operator who may not be an HDR specialist to achieve outstanding results.