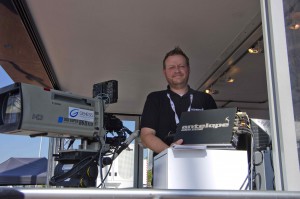 Up to speed: Christian Schreiber with the new Cobra Link and Antelope Compact camera at IBC

The new Cobra Link is a fibre conversion system that is specially designed for high-speed camera systems. It outputs two 3G-SDI signals, with one 3G-SDI return, and can have four intercom lines and up to four bidirectional data paths. It will also be able to work with Ultra HD (on request).

“There are three units. A remote unit that can output up to 350W, so you can power a complete Polecam rig [with Pico camera] or high-speed camera rig without any additional power. It can supply power up to 3km. It also outputs both 12v and 24v, which is useful when working with Phantom cameras, which require 24v,” said Christian Schreiber, sales manager, at IBC last week. “The complete package you need for the camera can be transmitted over one single SMPTE fibre link.”

There is also a newly updated Antelope Compact camera, which now offers comprehensive colour management. The lightweight B4-mount camera can shoot HD at up to 350 frames per second, with constant live output and a dedicated replay output. The Antelope Air wireless ultra slow-motion system is now at version two, which can shoot at up to 5,300 fps in HD with full remote control of telemetry and replay.

Its 1RU FPGA-based eXflicker realtime de-flicker module, which can be used with any high-speed camera, has also been updated, with pre-selectable frame rates, which makes it more accurate.

Antelope Camera Systems is itself newly set up, as a joint venture between LiveMotionConcept and Easylook Systems, to provide sales and rentals while LMC concentrates on productions.