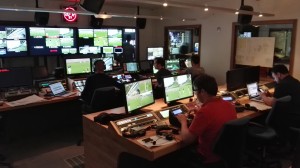 August saw the start of the new football season for the Proximus League in Belgium. And right from the first game, SiA (Skynet iMotion Activities), the production arm of the Proximus group (the largest of Belgium’s three mobile telecommunications companies) with responsibility for coverage of the matches, opted to use remote IP technology as an integral part of its plans. At the centre of that technology was a unique IP infrastructure from Lawo that enables up to three games a day to be broadcast using the solution. Working alongside Lawo and SiA were NEP Belgium and Videohouse.

“It all started with a wild Idea to do an innovative IP remote project within NEP Belgium,” reveals Geert Thoelen, project manager/engineer in charge at the company. “We wanted to test this in a real live environment that we know very well. So we approached Proximus to do a U16 Football test game in the spring of 2016. On 28 March we successfully did our first IP-remote production.”

According to Stef Lambrechts, technical support at the Multicam division of Videohouse Media Facilities, a team was created that brought together all the relevant departments. “It was very important that the IT engineers and broadcast engineers speak the same language. Together with the people of Proximus, we installed the systems at SiA. During the tests we discovered the operational issues, but together with SiA, Lawo and NEP, we succeeded in creating a stable sustainable workflow to make it work for everyone.”

Lambrechts reports that Videohouse had done some testing together with Lawo and Proximus since July 2015 on dark fibre gigabit tunnels, but that was less complex. “This was the first time a remote production had been implemented through a large managed telco network. This is more complex because you have more departments that need to work together.”

Thoelen goes on to say that NEP Belgium, together with Dirk Sykora and Geert Heirbaut at Lawo, designed an architecture to make this IP remote production possible on a limited bandwidth. “This architecture also had to work within the current stadia in order to reduce the necessary investment.” 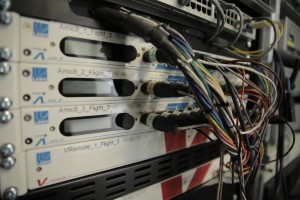 Dirk Sykora, the Benelux technical sales manager at Lawo, who designed and installed the system says that the key to success was the ability to install all the necessary infrastructure in just one flight case. “Unlike some other solutions, which need several boxes to meet all the demands of a broadcast, we have been able to combine them all into one easy-to-move and use container. The flight case used by Proximus contains all the audio and video features, the colour correction facilities, the syncing mechanisms, multi-viewers and streaming capabilities in a small device that occupies just one rack space. For the client, it is an incredible solution that doesn’t require any further hardware or additional embedders or de-embedders. Having everything in one box is an enormous benefit.”

Sykora explains that although the Lawo IP solution was already in place at other locations (it first implemented combined audio and video over IP in 2015), a few additional processes were needed for this football project. “In Belgium, we have to use the shared network – it is used for phone calls, VoIP, public traffic and so on — and because of this there are considerable fluctuations. As a result of those operational conditions, we had to make some changes to the set-up to cope with the variations.”

He continues, “We have a bandwidth of one gigabit up and down. That gives us a good balance between the bandwidth of the connectivity and the traffic that needs to be accommodated – cameras, audio, commentary positions, comms and tally configurations. Of course, the less bandwidth you get, the more compressed the video.”

Currently, three flight cases are available for SiA use – one for each of the games that are covered. However, with just two MCRs within the Brussels studio facility, coverage of two simultaneous games is possible.” Thoelen explains that NEP Belgium and Videohouse provided the operational personnel for the first games on site and at the MCR in the Proximus building in Brussels. A commitment that has continued. “As the facilities company, we provide six or eight GVG cameras – depending on the game, all commentary and interview positions at the venue.”

Lambrechts adds, “For each match we provide a remote OB at the site with a video and a sound assistant. Together with six cameramen they install all the equipment in the stadium. We provide also the operational crew at the SiA production room in Brussels. The set-up means the operators for shading and slomo, together with an audio engineer, will cover multiple matches on one day. That is very efficient use of personnel.”

Sykora goes on to explain that the set-up is easy. “Although six cameras is the normal configuration, up to eight can be used for the matches. Once the Lawo unit is switched on, all the checks and testing is completed within about 30 minutes. It is that fast.”

The configuration on site consists of 2 pieces Lawo V__remote4 and three pieces A__Mic8, a package that includes everything from Video-over-IP coding to various monitoring and processing tools. The control and the management of the complete IP-based production infrastructure is secured by the VSM System – a vital part of the connectivity chain. 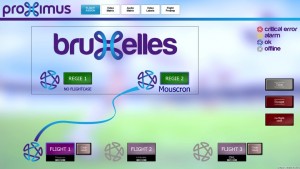 The VSM not only controls the respective hardware in use, but also the streams and bandwidth

“The VSM not only controls the respective hardware in use, but also the streams and bandwidth. We have configured the system as ‘auto recover’, which means that on each occasion that a remote flight case is connected to the network and to the studio, certain parameters are being set automatically – saving a great deal of time and effort.”

Sykora reveals that each of the Brussel’s MCRs utilises two V__remote4 to interconnect to the football stadiums. “Both MCRs are connected to the venues using VSM panels. These panels handle all the video and audio routing inside the MCR and for establishing video and audio between studio and the stadia.”

The SDI signals from all V__remote4 in the MCRs are connected to the video router, while the MADI signals from the V__remote4 are coupled to the Lawo Nova73 audio router installed in Brussels. At the venues, the flight cases consist of two V__remote4, connected to a Cisco switch located in the container and three A__mic8 Audio-to-IP interfaces. The camera streams between the stage boxes and the MCR are sent utilising J2K.

According to Sykora, the camera streams are sent to Brussels, two returns are received, 32 audio channels are sent to the MCR, and 16 audio channels are received from Brussels. “Lawo’s VSM Broadcast Control and Monitoring System controls all devices both in Brussels and in the flight cases. These include two Lawo mc256 audio consoles, a Miranda multi-viewer system, Kahuna vision mixers and all V__remote4 as well as A__Mic8 boxes in the flight case.”

Although there is a three frame delay on the video stream between venues and the MCR, Sykora says this causes no problems. “Obviously, the audio and video are re-synced before transmission. But for the operators handling shading and other camera control function within the MCR, this 120 millisecond delay causes no problems whatsoever.”

From start to live in two months

The whole project has been hailed as a great success. Massimo D’Amario, Managing Director of SiA states, “We are incredibly proud of the fantastic achievement of the joint team. Two months from start to live is just amazing. The IP remote production technology utilised here is an example of how Proximus and SiA leverage innovative technologies to better serve Proximus customers.

“The technology enables Proximus and SiA to optimise the full production cycle of the live games. It also provides higher value productions thanks to a higher utilisation of fixed assets and synergies in production crews. We are proud of what we have achieved for the Proximus League and are looking to extend it to the Jupiler Pro League, Belgium’s first division football competition.”

For Lambrechts the challenge for the production team, but which has been successfully overcome, revolves around communication. “The communication between the operational crew on the remote site and the production crew in the production room needs to be optimal. And the stability and the quality of the IP links provided by the Telco company are crucial to succeed in remote production.”

So, with a successful launch of the Lawo solution for the Proximus league, how does Sykora see the future of IP in Belgium?

“In my opinion, progress will be pretty fast especially in our area of the world. Companies like NEP and Videohouse, who have been involved with this Proximus project, see what we can do and will embrace it even further, I believe. We see it live in these football matches, but we will see the use of IP technology expand to other sporting events. In truth, I actually expect that it will happen faster than we expect it to do so.

“When we started working with SiA this was going to be simply a test – but it worked so well that the technology has been in use from the first game of the season. Now it is used for five games every week. That is good progress!”

Lambrechts adds, “IP remote production definitely will be the future of broadcasting in certain production segments of the broadcast market.”

Thoelen agrees that the future is looking good for IP. “The production companies are beginning to believe in the technology and I think in the near future they will start to adopt their ways of working to this more efficient way of contributing.”

He continues, “The initial challenge was mainly to make people believe in this technology and to adopt it to the way we think. Then we can start changing the general mind-set towards this way of producing and come to a very efficient and future-proof way of making television.”

Thoelen adds, “It has only just begun… there’s a bright future ahead.”