eSports is many things: lucrative, polarising, intriguing and even (at times) surprising. From a broadcast standpoint, eSports represents a whole new world of production experimentation. What makes for a good viewing product? How can this be different and (in some ways) better than watching traditional sports?

It’s that exciting prospect that enticed Matt Arden, executive producer/head of content and media, NBA 2K League, to embrace a property that, in just its second year, is already finding its legs as a top-flight live esports production.

“In season one, it was amazing that such a small team got a broadcast off the ground. Everything was focused on ‘Can we get this up on the bird and get it out for people to see?,” said Arden, who joined the NBA 2K League in December after a career during which he spent more than a decade at Turner Sports in Atlanta and, most recently, worked on the agency side in New York City.

Currently in week eight of its second regular season, NBA 2K League productions look largely different from those of its inaugural year, with many of the changes related to creating a more engaging product with a greater focus on storytelling.

Most notably, the number of cameras inside the NBA 2K League Studio Powered by Intel has been expanded to 21, and the hard cameras have been taken off tripods and placed on the shoulders of the operators, who are directed to move around and go in more tightly on the action. 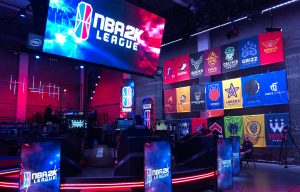 In its second season, the NBA 2K League has made a wealth of changes to both the in-venue and live-stream viewing experience of its competitions. Regular-season matches are held at the NBA 2K League Studio Powered by Intel in Long Island City, NY

“I want them in. Get in that moment,” said Arden. “We play in the round. Players get hyped. It’s exciting. There’s a lot of good-natured trash talk in our league, and it’s been great, but that energy can be difficult to translate in a broadcast [when you have static cameras]. Get those cameras in there when [the players are interacting].”

The in-arena experience is vastly improved. The studio, located in Long Island City, now features two large video screens: one is an arena-like centre-hung videoboard above the players; the other is off to the side of the playing stage, and players are introduced in front of it prior to the start of a game.

Behind each player’s chair is a smaller, vertical screen displaying a live shot of the player, their name, and other important data to make it easier for a fan sitting in the stands to identify the players on the stage and in game action.

In the studio, the league has also altered the positioning of its game announcers and show hosts. Play-by-play man Scott Cole and colour commentator Jamie ‘Dirk’ Diaz Ruiz (both in their second season) have a higher perch position than last year. Meanwhile, studio host and moderator Phil ‘The Phenomenal EE’ Visu is now working solo (he had a co-host last year) and has been directed to spend much more time interacting with fan comments on each of the league’s live streams to Twitch and YouTube.

“We realised we were sitting on two broadcasts,” Arden explained. ” One was the broadcast we were sending out, and the other was the broadcast that was organically happening within the Twitch streams. We weren’t reciprocating that as actively as I thought we could be. So Phil is active in both the Twitch and YouTube streams and is communicating with fans.”

Developing a thick skin around Twitch

This season, under Arden, the production team has been aggressive in trying new things within the game production itself, from segments in the show to playing with camera angles within the game engine. Experimentation has been met with both praise and derision by the league’s many viewers on both Twitch and YouTube, which should be of little surprise to anyone who has spent time in a Twitch chat.

“We’ve been cognisant of not taking the first few comments on the stream as gospel,” says Arden. “We’ve learned to develop a thick skin, but we also have tried things that haven’t lasted longer than a week or two of trial.”

One area where Arden and his team have been trying to push the envelope, despite varying levels of resistance, has been with in-game camera angles. Typically this year, a 2K League broadcast will stay on the classic camera angles within the game engine that players have come to expect.

To go beyond the 13 camera angles that the game itself offers, a position in the control room has been 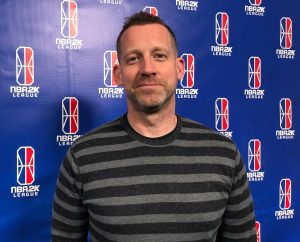 dedicated to taking control of those in-game ‘cameras’ and offering unique views of the action. The initial effort was met with much resistance from viewers, but, after receiving encouragement from players, coaches, and others within the league, Arden’s team kept plugging away.

They decided to offer fans the opportunity to select new camera options, making them more a part of the creative process. They even made the person operating the position in the control room, Mathew ‘Glitch’ Testini, a regular character in the game broadcasts.

The flexibility certainly makes for a thrilling environment in the control room. Positioned on the second floor of the studio, the control room looks very similar to one in a traditional broadcast truck. The production is built around a Ross Carbonite switcher with graphics pushed from a Ross Xpression engine. The front bench is manned by producer Chad Perry and director Rick Phillips, both of whom have been with the league from the start.

The emphasis on storytelling has spurred technological expansion. The league added to its Avid NEXIS media-management system (which pushes content to the league’s archive at the NBA facility in Secaucus, NJ). And adding a second EVS replay server allows one server and operator to be dedicated to gameplay, while the other focuses on the players themselves, the in-studio atmosphere, and more for bumps, teases, packages, and the like to help build a story of being part of the league.

“Because we are an eSport, there’s this [misunderstanding] that you abandon all of the linear-television knowledge you’ve ever known,” said Arden. “There are many storytelling techniques that we are bringing in that are universal and come from linear. Viewers want to know players better; they want to know the story behind the game. We’ve been actively trying to change those measures and get more storytelling into the broadcast.”

Growth of the league can also be credited to the production and operations teams’ ability to take the league outside its studio home. Already, the league has held tournaments this season in Hong Kong and Las Vegas, and, this week, THE TICKET powered by AT&T, the league’s third and final tournament of the season, will bring the NBA 2K League to The Fortress, the new esports facility at Full Sail University in Orlando. 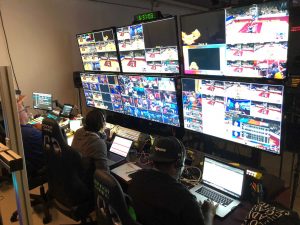 The NBA 2K League’s control room features a Ross Video Carbonite production switcher at the front bench. Producer Chad Perry and director Rick Phillips (far left) are back for their second season with the league

In THE TICKET, which runs Thursday through Sunday, all 21 NBA 2K League squads compete for a prize pool of $180,000, and a playoff spot is guaranteed to any team that wins it (regardless of regular-season record). That last fact is nothing to sniff at: last year, Knicks Gaming won the entire NBA 2K League championship, thanks to a playoff spot that it never would have achieved without winning THE TICKET.

The Fortress, a $6 million, 11,200-sq.-ft. esports arena, is currently the largest gaming arena on a U.S. college campus. It can seat up to 500 fans and promises to provide a unique venue for this league to shine in.

“We’re incredibly encouraged by the fact that we can take this show on the road and produce a high-quality product wherever we go,” said Arden. “I think it’s a unique opportunity to take this product and put it in front of people who maybe have never seen it before.”