Commonwealth Games 2018: BBC to showcase the glory of the Gold Coast in cost-efficient coverage 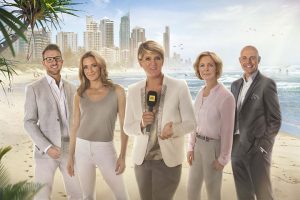 Four years on from a hugely acclaimed event in Glasgow, the Commonwealth Games return this week with Australia’s Gold Coast as the host location.

A few days before the opening ceremony, SVG Europe spoke to BBC Sport executive producer Jonny Bramley about the broadcaster’s plans for the Games, which revolve around a streamlined, beach-centric operation and extensive production back at BBC Sport in Salford.

Taking place from 4 to 15 April, the Gold Coast 2018 Commonwealth Games (GC2018) will bring more than 6,600 athletes and team officials from 71 Commonwealth nations and territories to the Gold Coast and the event cities of Brisbane, Cairns and Townsville.

Incorporating 18 sports and seven para-sports – constituting the largest integrated sports programme in the event’s history – GC2018 will host Commonwealth debuts for beach volleyball, para-triathlon and women’s rugby sevens. Significantly, it will also be the first time at a Commonwealth Games that an equal number of men’s and women’s medal events will be contested.

The BBC’s planning for the event commenced more than three years ago, starting with internal discussions about budgets and the scale and scope of the operation.

It was only after attending the world broadcaster briefing some eighteen months ago, however, that the corporation really began to think about the local infrastructure that would be require for the Games.

Inevitably, budget considerations played a part, ultimately determining that the BBC would adopt a split operation with the transmission galleries and the bulk of post-production happening in Salford, allowing it to keep a relatively small onsite presence.

“We then decided to use The Imaginarium studio that was previously deployed for the Winter Olympics in PyeongChang,” explains Bramley. “For the daytime on the Gold Coast – and during the night in the UK – we are basing our presentation around a single-camera RF set-up, and for the primetime we are using The Imaginarium back in Salford.”

The first on-site visit down under “centred around what we could be doing at specific venues and what form our presentation would take.” 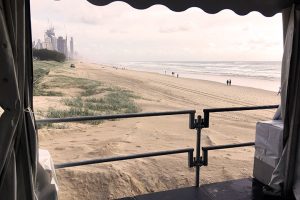 “Our backdrop will be these iconic visuals of the sun, sand and Gold Coast skyline.”

Logically enough, it was decided that the primary presentation spot would be located on the beach, he adds: “We do have to be mindful of the time zone not being great for the UK, but we can help to sell this with the location. It’s a great area – very much one for the outdoors life – and so our backdrop will be these iconic visuals of the sun, sand and Gold Coast skyline.”

Tonally, viewers can anticipate a continuation of the approach taken at previous Commonwealth Games, with many of the presenting team from Glasgow returning for CG2018.

“These Games do have their own unique feel,” he says. “We know it’s not the Olympics, but there is a very high standard of athletes so we want to reflect that as well as the friendly rivalry between the nations.”

Bramley offers praise for the work undertaken by NEP as host broadcaster and IBC overseer in the run-up to the Games, remarking that they “have done a really great job of getting everything ready. And the level of cooperation has been very good.”

As such, the set-up for the on-site BBC team – which is similar in numbers to the 140 that went to Delhi in 2010, including individual groups from regional BBC operations – has been as smooth as could reasonably be expected.

In terms of the onsite presence “we are talking about a very similar scale to what we had in PyeongChang,” says Bramley. 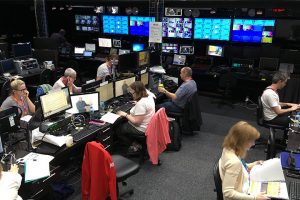 The BBC office within the IBC

That means that the technical team for live presentation comprises of one camera and sound operator, a comms engineer and a lighting engineer. In addition, there are eight ENG cameras which will work in the venue mixed zones as well as doing feature filming. There are three edit stations available onsite in the IBC.

As far as the basic control room operation is concerned, to make things as efficient as possible, the BBC is taking all the host DX feeds and its own unilateral feeds and reducing them to 12 circuits back to Salford.

“We have to hard-wire to a certain number of inside-source lines and then switch to 12 circuits in the UK,” confirms Bramley. “It is a more involved operation regarding ingest and replay [than at the Winter Olympics] because of the sheer number of sports here.”

By-and-large the BBC has traditionally augmented its Commonwealth Games athletics coverage with ISO cameras, an outside broadcast truck and on-site post. However, on this occasion, “because of [the costs associated with] travel we are not doing that; instead, we are taking the host integrated feed, and we are confident that it will be a good product.”

Once the games are over, Bramley expects the BBC Sport team to review the athletics coverage and look at what impact the absence of these additions might have had on the viewer.

“Working this way means that we won’t be able to focus on home nations’ competitors as much, and we may not see all the field events they are involved in too,” he says. “It will be interesting to see if that is particularly noticeable.”

For the opening and closing ceremonies, Commonwealth Games coverage veterans Steve Cram and Hazel Irvine will again be on commentating duties.

The closing ceremony will be particularly interesting given that it will include a segment looking ahead to the 2022 event, which will take place in Birmingham. “We are in contact with the Birmingham Ceremonies team to ensure we get that right,” says Bramley.

There is very little 4K production taking place at CG2018, with coverage limited to the opening ceremony and in standard dynamic range.

Like many of his industry peers, Bramley expects the Tokyo Olympic Games in two years’ time to mark a major watershed in the application of 4K to multi-sport tournaments: “I think everyone will want to raise their game after that.” 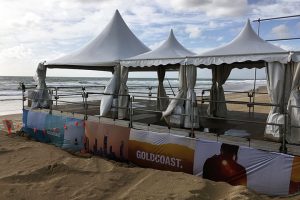 “Being under the hot sun is also a concern.”

Back to more earthly matters and the weather forecast is destined to be the subject of intensive scrutiny throughout CG2018.

“It’s not the same as PyeongChang, of course, where events could be susceptible to wind and snow, but [here on the Gold Coast] thunderstorms are a distinct possibility – I have seen a few since I have been here – and it might be that the outdoor swimming and diving venue would need to be evacuated in those circumstances,” says Bramley.

“The same applies to any outdoor venue as well as the presentation areas, where being under the hot sun is also a concern. So, there’s plenty for us to keep an eye on in that department.”

Fortunately, the long-term forecast “isn’t too bad, actually – a mixture of sun and rain, but no big storms we hope!”

The 2018 Commonwealth Games start at 10:30 BST on 4 April, kicking off with the opening ceremony. The BBC’s coverage of the Games will be available on TV and via the Red Button with extra streams also on connected TVs and the BBC Sport website and app. Radio 5 Live will also cover the event.