Birmingham 2022: Inside the host broadcast set-up for the Commonwealth Games with Sunset+Vine 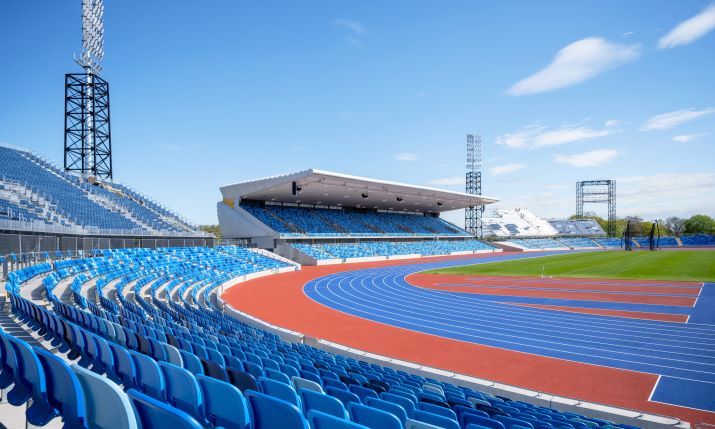 With time ticking on the run-up to the Commonwealth Games in Birmingham later this month, host broadcaster Sunset+Vine is working hard to ensure all rights holders have everything they need to bring every event to viewers.

This is Sunset+Vine’s third Commonwealth Games, but it’s first working independently as a host broadcaster. David Tippett, Sunset+Vine’s managing director, told SVG Europe: “Glasgow was the first one. We partnered with Global who are now NEP Australia, so that was a joint venture. And then on the Gold Coast, we were part of a consortium led by NEP, which included us and Seven Network. But this time around, we went alone. Obviously, lots of partners, including NEP, are involved, but we’re the lead.”

“I genuinely think athletics is one of the hardest things to do, and to do it well, because you’ve got the scale but you’ve got the concurrent events happening”

“It all adds up to another 1,000 hours or so, putting total coverage up to around about 3,000 hours, if you take everything that’s being repurposed and repackaged.” 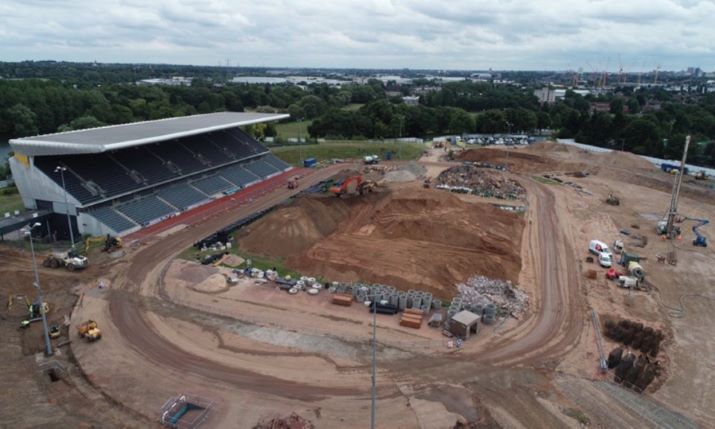 In July 2020, there was not a lot to see at the Alexander Stadium

The production of this Games is not on the same scale as an Olympics, but it is still impressive and logistically challenging. Tippett says: “We’ve got 19 sports but there’s 22 outside broadcasts once you factor in all the sports. Within cycling, for example, we’ve got track cycling, there’s road cycling, there’s a track cycling, there’s a mountain biking. So even within one sport you’ve got four different outside broadcasts with actually quite different requirements as well. They’re all the complex ones, especially the road race and time trial on the mountain bikes. Those are big old operations in their own right.”

On which sport can be particularly challenges, Tippett says, “it depends who you ask!,” but adds: “I genuinely think athletics is one of the hardest things to do, and to do it well, because you’ve got the scale but you’ve got the concurrent events happening. So we’re covering three field events and a track race at the same time – I’m producing feeds for all of those things – and there’s an integrated feed, which is effectively what you’ll watch on the BBC. But we’re offering all of the components to allow the BBC to create their own integrated feed, so we’ll produce an integrated feed which will be taken primarily by international takers, but the BBC has the option to customise that themselves if they want.”

On OB partners, a myriad of providers are involved: Timeline is working on the IBC, badminton, boxing, netball, weightlifting and para powerlifting, plus table tennis and para table tennis at the NEC; EMG is on aquatics at the Sandwell Centre, the marathon in the city centre, cricket at Edgbaston, the mountain bike, road race and time trial cycling at Cannock Chase in Wolverhampton, judo and wrestling at the Coventry Arena, rugby sevens at the Coventry Stadium, and triathlon and para triathlon at Sutton Park; NEP is covering athletics and para athletics at the Alexander Stadium, gymnastics at Arena Birmingham and lawn bowls and para lawn bowls at Victoria Park; Gravity is covering the 3X3 basketball and wheelchair basketball and beach volleyball at Smithfield; and Cloudbass is on the cycling track at Lee Valley, plus hockey and squash at the University of Birmingham.

Adds Tippett: “One of the challenges we faced at one point during the planning [of this Games] was the demise of Arena, because they were part of the original plans and they were going to be doing some of these sports. In fact, they were doing all of the NEC sports and the University of Birmingham sports. So Timeline stepped into take over at the NEC and Cloudbass stepped in to take over at University of Birmingham.” 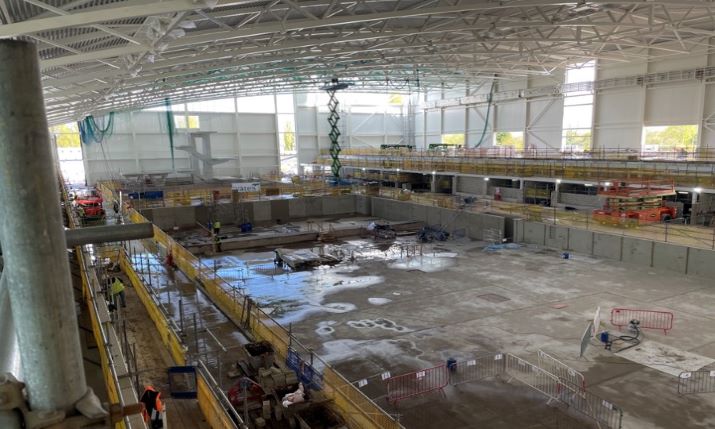 Tippett comments: “I think another interesting aspect to this that’s largely been accelerated because of COVID is the way rights holders want to access the feeds. There’s the traditional model which was we would produce video feeds at the IBC, and then it would be up to the rights holders to select which ones they want and figure out how they get them back to their base and that was it, end of story. Our job ended at the IBC.

“Whereas now, what you’re seeing is rights holders have got services at home and they want to take everything, or they want to take things and operate in a remote production model, which means we’ve just got to be a little bit cleverer and more flexible about how we make our feeds and our coverage available. That means looking at SRT options, for example, so people don’t just want a video feed option now; it cuts down the cost if SRT streams are available, rather than old fashioned, expensive video circuits over fibre in the old fashioned way. It’s just changing the way people want to receive the content and us having to adapt accordingly.” 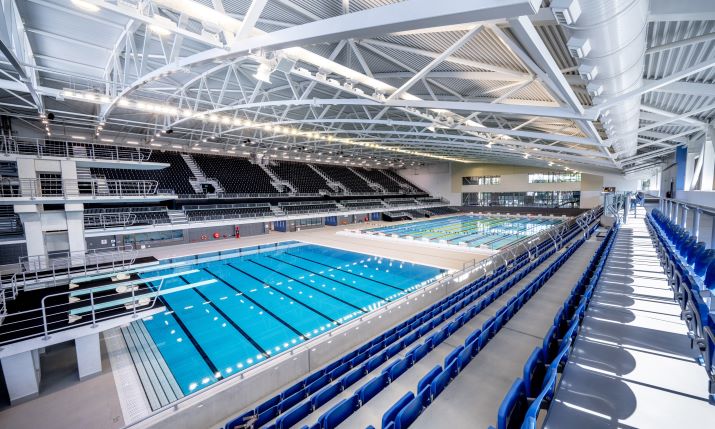 In its role as host broadcaster, Sunset+Vine has to expand its reach further than its usual role as production company. Notes Tippett: “We are a host broadcast business but we’re still, at our core, a production business. So what we’ve tried to do is bring a production approach to doing host broadcast; that’s what we always try and do. It becomes a more qualitative type of operational project than just a quantitative.

“With this sort of project you just can’t treat it like a normal production, so I think that’s been one of the things we’ve been conscious of. I wouldn’t say it’s a challenge because we know how to do these sorts of things, but it’s just doing the non-production bits properly.

“It’s the bits like designing and building an IBC, or the scale of rights holder management that comes with this kind of job. So this time, we’ve built and launched a rights holder asset management portal and we’re running all of our rate card bookings through a [separate] online portal. So we’ve designed, built and launched a website. That’s not a production company sort of thing. Those are the sorts of things that come into a big host broadcast that you might not necessarily consider the job of a production company.”

“There’s 72 countries competing, so each one has a requirement as well from a content perspective. In the early days there was a lot of discussion about what is the right kind of venue, of content, and of services to provide in a Commonwealth Games post-COVID. And also, just trying to reflect the way that a big event is consumed across all sorts of different platforms. That’s where all of the innovation comes in, so for example, there’s a big Games time clipping and content operation in place now, which will be producing short form content or digital clips or social clips that can be used by all of those national associations or sponsors, or the CGF themselves; that’s something that we had never done at a Commonwealth Games before.”

He continues: “We’re doing streaming for extra fields of play at table tennis and badminton and squash. So again, in the past, take badminton for example, there’s a show court and that’s where you’d see the main games, the live coverage of that. But there’s also lots of other courts happening as well, and so we’ve put in a solution to produce digital-style coverage on the extra courts. Again, that’s something that’s not been done before as well. So there’s quite a few ‘not been done before’ but the focus has been on just updating the overall scope of services.” 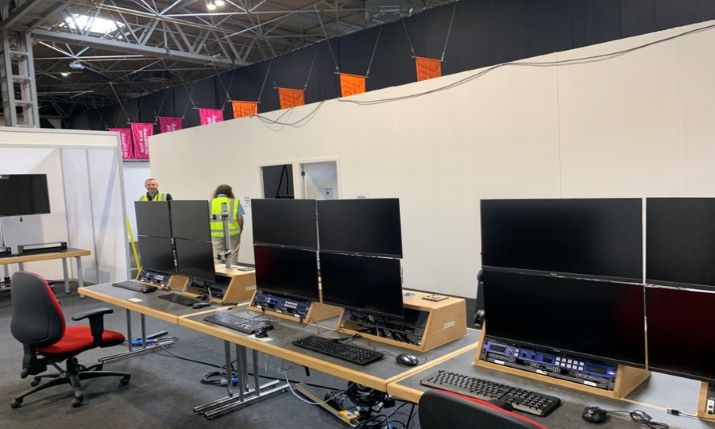 Building the IBC at the NEC in Birmingham in early July 2022 were Sunset+Vine’s director of technical operations, Mark Dennis, and head of broadcast technology, Tom Copeland

Sunset+Vine was awarded the host broadcast contract one week into the first lockdown in England in 2020 in early April that year. The tender process began in autumn 2019. Comments Tippett: “There was quite a long build up to being awarded the contract; it was a fairly lengthy process. Then we were notified that we’d won it a week into lockdown, so that was a real boost when everything else wasn’t very positive. So we’ve been working on it for more than two years now.”

The multiple lockdowns since then did not negatively impact Sunset+Vine’s planning for the Games; rather, they improved it. Tippett explains: “Do you know, in a funny sort of way things like Teams and Zoom have made large planning meetings a little bit more efficient, because I think in the old days you used to go into a big meeting room and there’d be a whole load of printed plans on a desk and everyone would try and pour over them and all that kind of stuff. Now you just sit at your desk and someone shares their screen and they go through everything. It’s a far better way of actually running some of these big venue planning meetings. And even when we’re all in the same place now, often now we’ll just sit at our desks and do it that way. So in some ways it made some of the planning more easy.”

However he adds: “I think where everybody struggled in the beginning was the inability to go and do site visits and the difficulties everyone’s had with doing site visits [over this period]. So I think that was the one area where we would have preferred to have been out and seeing places sooner. Having said that, at a lot of the bigger venues there was nothing to see anyway. Alexander Stadium was a building site when we started. Sandwell, the aquatic centre, I don’t even know if they would have started construction at that point. It was very, very early days. So there were places where we wouldn’t have got much out of a site visit anyway.”

The Games does not lend itself to the efficiencies of a remote production, says Tippett, because of the compressed schedule. Instead, Sunset+Vine is using as many local people as possible. He adds: “We’ve addressed sustainability and minimising our carbon footprint just by being very careful about how we travel people around. We’d have still had to have people travelling around – well probably more, actually funnily enough – if we’d been using a remote or several remote hubs.”

There will be around 1,500 crew members working on the production for Sunset+Vine, with the vast majority of those being freelancers. Around half of Sunset+Vine’s permanent staff, however – approximately 60 people – are working on the Games.

Sunset+Vine is providing at the Commonwealth Games:

The Birmingham 2022 Commonwealth Games take place from 28 July to 8 August.