Community approach to audio at the new Mielec Stadium 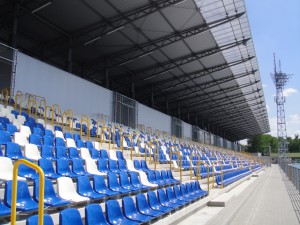 Home to the Stal Mielec football team, the new stadium replaces the original which was built in 1953 and hosted numerous high-profile events like the European Champions Cup, UEFA Cup, and Polish national team matches, including FIFA World Cup and UEFA European Championship qualifiers. Whilst providing a completely modern venue, the new stadium replicates the old venue’s seating capacity of 30,000 and its format of an athletics track around the playing field to provide multi-sport facilities.

Two tiered stands flank the length of the stadium, with the main West stand also providing for 100m athletic events. The system designed by Tommex comprises twelve Community R.5HPT three-way, horn-loaded coaxial loudspeakers covering the seating areas of the West stand, with a mirrored system of twelve Community R.5HPTs covering the East stand. Two R2-52 three-way, horn-loaded triaxial loudspeakers are also mounted on the West stand canopy, to cover the pitch and competition zones. Additionally, Tommex provided sound projector and ceiling loudspeakers for the public areas and the rooms under the stands.

Tommex chose Dynacord DSA 8410 and PCL 1240T amplifiers to drive the systems, located in two separate amp rooms in the West and East stands. System integrity is ensured with the use of Dynacord’s DCS (Digital Control Switching) system to provide uninterrupted transmission in the event of any amplifier failure.

Mixing is provided by a Dynacord CMS 1000-3 and a Dynacord P 64 controls the matrix and signal processing, with system monitoring. A computer with touch screen is connected to the matrix P64 to provide a convenient interface for independently adjusting sound levels in the stands, on the pitch and in the zones under the stands.

Jarosław Kraszewski of Tommex, the designer and project manager for the system, explains: “We have successfully completed many projects of this type and always get great results using Community R-Series. Their audio quality, high intelligibility and efficiency set the standard that stadia expect today and their all-weather capability and long-term reliability is a major factor that we know we can depend on.”