Comprehensive media strategy: how Arsenal scores with its loyal fans 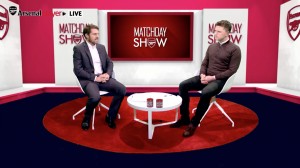 Long gone are the days when football clubs were just involved with 90 minutes on a pitch during each game. Today, the clubs are brands – and that means that alongside playing they must focus on hospitality, events, sponsorship, retail and, of course, media.

During the fairly recent past, many of the top names in the English Premier League, La Liga, Serie A and the Bundesliga have developed their own television channels as part of their media outreach. Some of those channels appear on the TV Guide of broadcasters, but others have opted to make their offering available via the Internet. One such football club is Arsenal Football Club (AFC).

“Football clubs have had to become far more media savvy to enable them to reach and engage their millions’ of fans across the World,” states John Dollin, senior systems and operations manager, Arsenal Broadband Ltd – a 50/50 joint venture between AFC and KSE UK, Inc. Dollin, who admits to being an Arsenal fan himself, heads up a small group that takes care of the online and broadcast operations of the club.

To achieve the goal (no pun intended) of the JV, Arsenal Broadband produce content for the website Arsenal.com, Arsenal Player (similar in operation to the BBC iPlayer, for example), the club’s YouTube channel, iTunes and various social media channels. The company also delivers content to 23 broadcasters around the world using Occasional Use (OU) satellite capacity.

“Video is an important way for how the Club and its sponsors engage with the fans. However, the output on YouTube is different from, say, that on Arsenal Player,” explains Dollin. “On the former, the tone is whimsical and content is non-serious; promotions and short form videos. Unfortunately, due to media rights, we are not permitted to show any match day footage on YouTube. On Arsenal Player the tone is classy and the content includes full match day coverage and Club specific features, including match day analysis and behind the scenes interviews. Arsenal Player is available 24/7 as a VOD provision.”

Dollin says that between 20,000 and 30,000 subscribers log on to the stream of their live match day show, which is broadcast over the Internet for home and away matches. The service is free – viewers simply need to register and create an account. The current subscriber base is circa 1.6 million.

He goes on to explain how the output works: “We shoot and produce the majority of our content in house. This includes a weekly 30 minute behind the scenes documentary, a 30 minute breakdown from the previous game, along with stories from the training ground. There are interviews, live press conferences and so on. Obviously, all this content means there is a huge amount of material that needs editing. And for this, we use Adobe Premiere.” 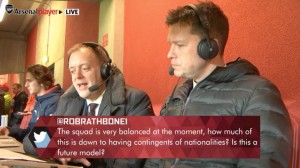 The club produces an Arsenal-centric commentary for its fans.

But one of the main focuses is on the live output, as Dollin remarks: “On match days, we provide Arsenal Player fans with a live match day show, that starts 30 minutes before KO. The show is produced from our own studio located beneath the stadium.”

The green screen studio accommodates four locked off Sony EX3 cameras – three for discussions between presenters and one for a stand-up position, if needed. “The programme is fully scripted and we use teleprompters like the major broadcasters. Such is our desire for full professionalism,” emphasises Dollin.

The gallery is equipped with a NewTek TriCaster 8000 switcher which, with its multiple outlets, means that if action is taking place elsewhere during a studio interview, for example, the director can record the alternative shots for playback at a later time. “We have multiple virtual sets built into the TriCaster so that we can change the look and feel of the studio for different programme genres.”

Audio is controlled from a Yamaha 01v96i console located next to the vision switcher.

“We can show pitch side shots featuring the Arsenal players and fans up until the time of the whistle for kick-off. Of course, with the broadcaster rights in place, we cannot show the game itself, but we can use our own cameras to show fans reacting to the ebb and flow of the action. We also have a Panasonic AW-HE130 PTZ camera so the fans watching on the Arsenal Player can see live reactions from our commentators sitting pitch side in the press area.”

Although pictures of the game are the domain of the appropriate broadcaster, fans can listen to the Arsenal-centric commentary on Arsenal Player and via the Club’s mobile app. It is, therefore, feasible for fans to watch the game by ‘traditional’ television means, but listen to the dedicated commentary on their computer or similar device.

“We are not ashamed to focus on Arsenal through our commentators,” states Dollin. “Of course, the broadcasters have to be neutral – but that can sometimes frustrate the true fans. We are providing a service for those who are truly dedicated to The Gunners.”

More than the match

Once the final whistle has blown, Arsenal Player will revert to dedicated video output that might include post-match interviews with players and opinions of the fans. The Arsenal Player team uses one of the flash rooms that have been set aside for interviews – although Dollin admits the broadcaster usually has first choice of the interviewees.

A second set of commentators are employed to provide coverage for an international play out several hours after the game. “We are given a clean feed from the broadcaster, with an atmos audio track. That allows us to use our own commentators and Arsenal-branded graphics on the programme. This is then played out, after the embargo time has been fulfilled, to Israel, where it is uplinked to two satellites for distribution to 23 broadcasters worldwide. Research shows the footprint for these transmissions is 107 million viewers.”

Clearly, the operation is quite considerable – and so is the amount of content being generated on a daily basis. Handling a huge amount of material led Dollin to look at ways of improving the workflow and managing the throughput of his unit. “I needed to find a solution that could help it easily and securely manage and share content, as well as work collaboratively in a timely fashion.”

His search led to the deployment of Aframe – the cloud video collaboration platform that provides organisations with one central portal that allows all authorised users to view instantly, access and work with high-resolution media.

He continues: “When we turned to Aframe, it wasn’t the first time we had tried a video management platform. In the past, we had used a number of file hosting and transfer services, but these couldn’t handle the huge amount of content we were creating. Not only that, they couldn’t cope with the complex functionality we required for the successful operation of our service.”

Dollin explains that with Aframe, all of the HD media is ingested directly from the camera in its native format and uploaded straight into a secure cloud storage facility through accelerated UDP (User Datagram Protocol) file transfer technology. “This saved us both vast amounts of times and courier charges. These were key considerations when it came to the making the choice. Now, we are able to upload our material in a reliable and effective manner, enabling us to manage our content from remote locations – our training ground near St Albans, for example – without any loss in quality.”

Arsenal also uses Aframe for logging, a procedure that was previously very lengthy. “One of the huge benefits of the system is the ability to be frame accurate in the logging process. When, for example, a journalist conducts an interview, he can transcribe his notes straight into Aframe, scrubbing video in the cloud and setting in and out points for each paragraph of text. The video and the associated metadata can then be downloaded from Aframe by the editor back at Arsenal HQ and imported straight into Premiere as accurate markers. Of course, the editors use their craft to trim those markers as necessary. We can also share the content simply by sending a link, and our teams can watch the footage on any device, which is extremely convenient.”

“But the real magic is combining this system with Strawberry as the text written by the journalist and imported into Premiere becomes immediately searchable, reducing the onus on the editor to log their footage.” Strawberry is a Production Asset Management (PAM) system from German company Flavoursys. This PAM combines the latest project sharing and project management, meaning that editors should spend less time searching for content. It is rich in metadata and allows searches to be made word by word – which is ideal when you have hundreds of hours of content to log. To give you an idea of the scale, the Isilon storage capacity at Arsenal is 240 Terabytes and they burn through well over a TB a month.

Dollin says that the new workflow arrangement also means edited content can be sent to the cloud, with those that need to give approval able to check it on their iPhones or other devices.

He concludes: “We have worked hard over the last year or so to create a media environment that enables Arsenal fans to feel closer to the club. Our improved production and workflow efforts mean they can engage with the football and background activities of the Club in ways that have not been possible previously. That’s good for them and good for the club.”