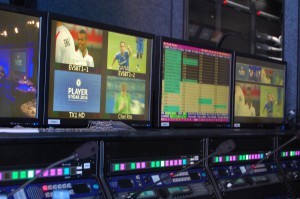 May saw Video Europe take delivery of its newest outside broadcast vehicle – and within days it was used to cover Chelsea Football Club’s Player of the Year awards at the Stamford Bridge ground in London.

The 16-camera, double expanding truck, which was built by C2S Systems, brings the number of OB vehicles operated by Video Europe to four. To complement the new scanner, a support truck was commissioned at the same time. In all, the company has invested £1.3 million to boost its vehicle capacity.

Moreover, the growth will continue. As part of a continuing expansion programme a new 10 camera OB vehicle – again built by C2S Systems – will be delivered before the end of the year.

“Our expansion also involves a new flyaway kit, being delivered by C2S Systems in June, and a move to new premises that will accommodate the vehicles and our growing equipment rental inventory,” states Richard La Motte, Video Europe’s head of OB and projects.

La Motte continues: “We opted for a 16-camera capacity vehicle because there is a great deal of ‘occasional use’ work for a medium size truck. And with the service we offer of a fully managed, crewed and equipped facility for production houses, that can also be ‘dry hired’ to OB companies, we believe this is the way forward for us.

“We did look at one other systems integrator before selecting C2S Systems for the build of these vehicles. However, C2S could meet our delivery schedule and, just as important, our price expectations!”

The new 26 tonne truck – OB3 – is based on a Mercedes Benz Axor chassis and measures 11.4 metres by 2.55 metres when travelling. Operationally, it can expand to 4.5 metres or 3.5 metres wide, depending on the configuration used. It can also be operated with only one side expanded, to allow access to smaller parking spaces.

“This was our first systems project for Video Europe following a long history of supplying equipment via WTS Broadcast,” explains Ben Murphy, sales director at WTS. (WTS Broadcast is the equipment supply arm of WTS Group of which C2S is the systems integration provider.)

Murphy continues: “The Sony HDC-2500 cameras will use a mix of Canon XJ95, HJ40, HJ22 and HJ14 lenses. Those cameras will be mounted on Vinten Vector and Vision Range tripods and pedestals, as required for each job.”

“The Omega platform gives the truck the technical and operational capabilities required for the target market for this size of vehicle, and offers expansion for larger productions using MADI and Hydra,” emphasises Murphy.

He goes on: “We installed a Miranda NVISION 8500 Series hybrid router and digital glue because of the flexibility to utilise audio from various signal formats, while the ability to synchronise, demux and remux within the one unit means that more demands can be accommodated. This is especially useful considering the varied range of productions this unit is likely to take on.

“Other equipment includes a Kaleido modular multi-viewer which provides the functions required, along with ease of integration with the iControl platform, Telex Adam, with KP12CLD and KP32CLD keypanels for comms, and Tektronix WFM7200 waveform vector-scopes.”

The rest of the order

OB4, the 18 tonne tender unit that will accompany the newly delivered scanner, can also be used to accommodate multiple Avid or Final Cut positions, as well as the possibility of shared storage, interplay and EVS connectivity. There is also space for six VT decks, if required.

Murphy explains that the Flyaway kit has been supplied with 24 channels of Sony 2500 cameras and two Grass Valley Karrera switchers. “We have opted for a Karrera for this package because it packs in a lot features – especially for its price point – meaning that the flyaway will be able to meet all the demands of the various productions.”

“Video Europe has previously standardised on Miranda multi-viewers, glue and routing for both OB3 and their previous flyaway. Now that Miranda and Grass Valley are united within one company, there are distinct design, integration, commercial and support advantages to be gained from sourcing multiple components from one vendor,” states Murphy.

Other equipment used for the kit includes JVC, Marshall and NEC monitors and Trilogy 2x Mentor XL packages with mastermind changeover. Two EVS Racks and decks can be added as required for recording.

Although the capacity of the truck to be delivered later this year is smaller, La Motte is confident there is a market for a 10-camera scanner. “Video Europe has a lot of existing work which requires a small production vehicle in and around London. There are many locations that will simply not accommodate a large production vehicle. The new 10 camera unit has been ordered as part of an upgrade/expansion of our ‘small’ production business.”

La Motte concludes: “By ordering an additional truck we are demonstrating our confidence in the future. Along with our regular customers, the OBs and Flyaways generate business for Video Europe’s extensive hire equipment. We feel that, because the OB business in general has undergone some consolidation recently, there are opportunities for an independent high end OB, Flyaway and equipment supplier such as ourselves. Yes, the future looks good.”