Connected stadiums in the ascendant in France 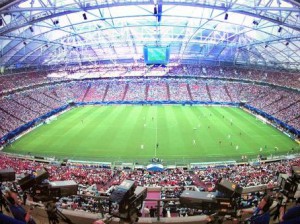 A major LAN upgrade is in progress at Stade de Lille

To face the challenges of the upcoming European Championships that will take place in France in 2016, French stadiums are undergoing a process of refurbishment. In the last five years, stadiums and other sports arenas have been designed to include a complete range of broadcast facilities, as well as dedicated spectator services; for example, facilities in Lyon, Bordeaux and Lille are all going digital.

4G multicast, which uses the eMBMS standard, is based on mobile compression technology that can theoretically send unlimited content in push mode to subscribers situated in the vicinity of a relay antenna – and therefore solve mass audience distribution issues. Broadcasting content in this way presents the added advantage of rapid deployment thanks to a compact antenna system. However, compared to Wi-Fi it remains costly so it is intended for events that present strong consumer interest. 4G Multicast was trialled by Orange and its partners (Alcatel- Lucent, Qualcomm, Samsung) at the last Roland-Garros Tournament and should also be tested at the Stade de France.

As part of the LAN upgrade, some 75 kilometres of multi-mode OM4 optical fibre cable should be installed at the Stade de France. Infrastructure renovations are also expected to include replacing the two giant 200sqm screens provided by Luxmax within the next two years.

In 2015, the Stade de France will be completely equipped with high density Wi-Fi and will include the deployment of a multi-service LAN network that will turn it into a plug and play stadium, rapidly and easily available for all sorts of events. Furthermore, the current replacement of the old fibre optic network is designed to boost the complete overhaul of connected solutions available to customers, ranging from badge requests and entrances to the stadium or press areas to laying down fibre optic cables mainly for broadcasting purposes.

Stadiums face stiff competition from ever-evolving television channels that are keeping viewers hooked with their super slow-motion effects and second-screen applications. Consequently, in turn they also need to offer a maximum of content and screen option services.

The new team at the Lille Stadium, where the LOSC Lille football team play, asked Manganelli Digital Signage to develop a hybrid system to meet its needs.

“The main difficulty was finding a way to use the international signal (world feed) while adding several display layers according to the predetermined public areas,” explained Pierre Tiange, technical director for Manganelli DS.

In order to do so a skilful mix of traditional IPTV receivers and digital signage displays was established. The stadium is split up into several zones (public areas, private suites, changing-rooms, corridors). A total of 387 screens of varying sizes transmit a variety of content depending on the target audience. Before and after the international signal broadcast produced by the event’s service provider in its OB truck, a Tricaster video production system is deployed to send out the in-house programmes.

In short, stadiums have not ceased to surprise us and it is certainly essential that they continue to offer more and more connected services on-premise if they want to maintain their attendance numbers.