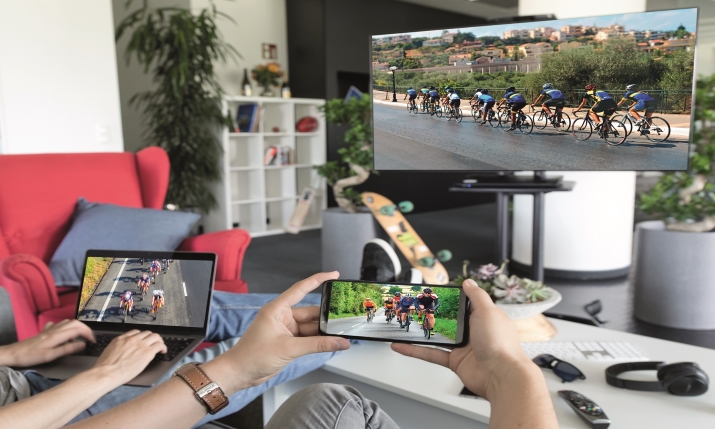 As video streaming providers increase in number, consumers are increasingly interested in being offered bundled services to reduce the cost and complexity of subscriptions.

According to a new study from Imagen, consumers also said they believe traditional TV will cease to exist.

However, Imagen commercial director, Will Pitt, told SVG Europe that sports content has a major advantage over non-sports content, in that people will actively seek it out, no matter where is is hosted. He explained: “Non-sports content, particularly original scripted content, has to work hard to gain the attention of consumers and often relies on uncontrollable developments such as word of mouth or good press.

“By contrast, and somewhat uniquely, sports broadcasting differs in that consumers will often seek out the channel or platform that has the rights to a particular event or league.”

Pre-COVID 19, competition within the over the top (OTT) market had already been intensifying, with the launch of a plethora of new platforms offering more choice than ever before.

During lockdown, consumers appetite for content has been stimulated but not satiated; time spent in video streaming apps globally during the peak week of March and April 2020 grew 30% compared to the weekly average time spent in January 2020.

However, with consumers now facing an increasing fragmentation of their favourite content, the ideal content package becomes expensive, reflective of the early satellite packages.

Research from Imagen has shown that nearly a fifth (17%) of consumers believe there will eventually be too many streaming services to choose from, resulting in people returning to traditional TV.

Yet almost a quarter (24%) of people surveyed believe that traditional TV will eventually cease to exist, highlighting the fact that traditional broadcasters must evolve. This indicates that while streaming platforms have proven popular since their inception, their place within the broadcast market is becoming more precarious as consumers are faced with too much choice.

The research also found that nearly a third (29%) of UK consumers would be more inclined to subscribe to more streaming platforms if they were bundled, suggesting partnerships are key to survival.

With the advent of streaming platforms leading more consumers to turn their back on traditional television, 27% of consumers think broadcasters will adopt services similar to those offered by streaming providers. Broadcasters such as the BBC are already doing this with their on-demand platforms which allow viewers to stream content, sometimes ahead of it airing on television. This approach enables broadcasters to keep up with consumer demand and the competition, while maximising their content.

For sports content providers, Pitt said the sport’s brand is key: “There are really two components that a sports broadcaster or platform needs to consider, be they OTT or linear; content and brand. Content comes first as it is the component that will persuade the consumer to access the channel in the first place and is the lifeblood of the brand. But the brand is vital too. As sport offers up the excitement and drama that it so consistently does, the consumer associates that entertainment with the brand, and favourably so.

“Whilst the market for sports OTT channels and platforms in most territories is still relatively uncluttered, consolidation (via merger or acquisition) is likely because sport is such a big draw. In parallel, the dominant linear broadcasters and platforms will be doing all they can to present their brand offering to the OTT market and we’ve seen a lot of that in the last couple of years,” Pitt concluded.

Meanwhile, Charlie Horrell, CEO, Imagen, commented: “The OTT market has become increasingly competitive over the last  year, with the likes of Apple TV+ and Disney+ launching, therefore, it’s critical to streaming platforms’ survival that they respond to consumer demand. Partnering with other streaming services or indeed traditional broadcasters – like Sky has already done with Netflix and Disney+ – to offer bundles will allow OTT providers to present a more captivating offering and appeal to more customers. It would also mean they’re not constantly competing against each other, but rather working together to gain a more solid share of the market. This could be particularly effective as we know that a growing number of consumers favour stacking two or more platforms, especially now we’re in an environment where many audiences are spending more time than ever at home.”

He added: “While traditional linear TV has seen a resurgence in recent months due to COVID-19 lockdowns, this won’t always be the case. We are already seeing some traditional TV providers forging partnership with streaming services to create a more attractive offering. While customers will still be required to pay for the additional streaming platforms, it makes the process of accessing that content more convenient, with 25% of consumers believing we’ll see more of these partnerships in the future.”

Despite their growing popularity, 30% of consumers do not currently have access to any of the main streaming platforms, a figure that rises to 51% among those aged over 55.

Horrell concluded: “While forming partnerships with other broadcasters will be key to the survival of OTT providers, there is an opportunity to not only survive but thrive by tapping into this lucrative 30% of consumers who don’t currently subscribe to any platforms. If they were to win the battle for this untouched audience OTT providers would be able to gain valuable market share without having to tempt subscribers away from their competitors’ customer base. With our previous research finding that original content is a huge deciding factor when choosing to subscribe to a streaming platform, we could be just one original content production away from an entirely different streaming landscape.”