Countdown to kick off: How BT Sport is preparing for the 2019-20 football season

Six years ago – on 1 August 2013 – BT Sport was launched. Three years later, and the broadcaster has built a network of multiple linear and digital services with a rights portfolio including live and exclusive coverage of every UEFA Champions League match.

For the coming season, Amazon has the rights to show every game from the first round of Premier League midweek fixtures in December, followed by all 10 matches on 26 December as part of a three-year deal. However the industry is more complex than ever, with competitors also becoming partners. 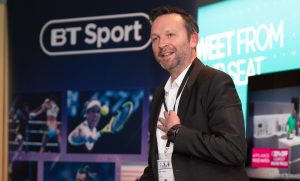 “We carry out a lot of support work for a number of broadcasters from our East London studios, and this contract with Amazon is part of that service,” explains BT Sport’s chief operating officer, Jamie Hindhaugh. “We are proud to showcase the production quality we can offer. We are pleased to be selected to support (with our production partner Sunset & Vine) Amazon Prime Video’s production of both studio and live action match-day coverage

The main commentators on BT Sport will continue to include Darren Fletcher, as well as the likes of Ian Darke and Peter Drury. New faces on the team this season will be Robin Van Persie, Joe Cole, Peter Crouch and Karen Carney.

So, is BT Sport planning any innovations for the new season? “We are always innovating!” emphasises Hindhaugh with some force. “This season we are launching a new service called BT Sport Ultimate. As subscribers will quickly see, Ultimate aptly describes their viewing experience.”

He explains that depending what platform is being used and what connectivity is available, the viewer will be able to select the best possible quality picture that can be obtained. “On mobile they will be able to watch live the Premier League in HD/HDR. On BT TV, they can watch in 4K and then that will roll out across other platforms. It will be the ultimate experience when it comes to picture quality regardless of the platform. I believe our HD/HDR for mobile is a first anywhere in the world.” The first commercially available live match in HDR will be this Sunday’s FA Community Shield clash between Liverpool and Manchester City.

The other major innovation is the use of 360 live highlights provision for BT Sport’s 2D app environment. The broadcast carried out a trial at the FA Cup Final earlier this year and the technology is now moving to 8K 360 capture. That will allow viewers to pinch and zoom the output.

“It’s all part of what I describe as ‘taking our audiences to the heart of sport’”, states Hindhaugh.

Saturdays on BT Sport will feature a new show called Early Kick Off. Hosted by Jake Humphrey, Jules Breach and Robbie Savage, the 10 am to midday show will look to set the agenda for the weekend to come.

With so much innovation available, what does he see as the other major developments in the recent past that meets that criteria of getting to the heart of the action? “We were the first broadcaster to provide live 4K sports anywhere in the world. We were also the first live sports broadcaster to roll out immersive audio using Dolby Atmos. And BT Sport was first to provide a 12 camera 360 director’s cut. Now, other broadcasters follow suit.”

However, he is keen to point out that the reason is not just to be able to claim the leadership in these areas, rather to provide these developments to meet viewers’ expectation and needs.

“I guess there are two other major developments. The first is the more informal way of presenting the programmes – using pitch side analysis rather than pundits sitting in a box. That again is an illustration of how to get closer to the action. And secondly, with the growing popularity of women’s football we are making increasing use of women pundits and presenters. That provides much more diverse and inclusive representation.”

No remote production is planned for the Premier League coverage this season, although BT Sport will use the technology for some of its other football coverage.

“We did the world’s first 5G live remote production last year. We are actively looking at remote technologies that involve satellite, fibre and 4G/5G. We think it is a great opportunity and one activity we are planning for the National League is the ability to get goals back from every game as they happen. That will enable us to broadcast a highlights show on a Saturday evening.”

Sport has seen an increasing use of Augmented Reality (AR), so does Hindhaugh see this trend continuing? “Of course, but only to make the programmes better. I do not believe in using technology for technology’s sake. There has to be a balance. We use RT Software for our AR and Ncam for the camera.”

He continues, “When we do our Score programme where we are not allowed to show live goals, for instance, we utilise an AR data map which illustrates how the ball got in the goal. And that is a good use of the technology.”

Beyond ‘conventional’ broadcasting, BT Sport is actively involved in the advances in social media – and especially the need for instant updates on news. “If we don’t provide that service, viewers will look elsewhere,” says Hindhaugh. “We are on Facebook, YouTube and Twitter. But our teams are commissioned to create content no matter what platform is being used. We also commission digital only programming like No Filter aimed at the football and boxing audience.”

Hindhaugh concludes, “The message is BT Sport’s relationship with the Premier League has grown with each cycle and that enables us to push innovation. This is a fantastic partnership that allows us the push the viewers’ experience. And that surely is what this is all about.”

Additional reporting for this article was provided by Will Strauss