Countdown to kick off: Sky Italia team prepares for new Serie A season

Italy’s 2019-2020 Serie A kicks off on Saturday 24 August with a match between Parma and Juventus and with coverage provided by Sky Italia. “We’ve been producing Serie A since the birth of Sky Italia in 2003,” explains Dante De lulio, the broadcaster’s director of sport programming and production. “We have always been the key partner for Serie A to produce and distribute their product to the Italian audience.”

The broadcaster covers seven out of 10 games per match day (DAZN looks after the remaining three) for a total amount of 266 out of 380 games per season. 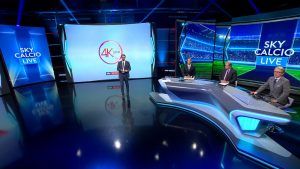 Sky’s current deal started in 2018-19 season and will last for two more seasons. Although no major innovations are planned for this season, De lulio reports that Sky and Lega Serie A launched major innovations — including 4k HDR production — at the beginning of the rights cycle last year.

“We believe that 4K HDR has been and will be one of the greatest add-ons to provide improved content and an ever-increasing quality to our customers. On top of that, a significant improvement has been the integration of data with Audio Video production.”

Sky’s main commentators for the season will be Fabio Caressa and Giuseppe Bergomi. De lulio reflects that Bergomi was part of the FIFA World Cup in Spain in 1982 when he was aged just 18. “Fabio and Giuseppe commentated all the matches that Italy played in Germany to win the FIFA World Cup in 2006. In Italy, they are the representation of football.”

The broadcaster uses a number of OB providers for its Serie A coverage – these include major European players like NEP and EuroMedia, and local facilities companies such as NVP, Cinevideo and OneTV

Like other leagues, Serie A stipulates the standard numbers of cameras per game, although De lulio says that there is always a possibility for the rights holder to use more cameras to produce a better match for its subscribers.

He explains that Lega Serie A sets four production standards:

He adds, “All the top matches also utilise Spidercam and UltraMotion cameras.” 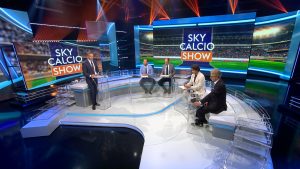 “Our goal was to make set elements, lighting and graphics be an active part for our sport storytelling that contributes to creating a unique football experience. We use Dataton Watchout system for LED wall graphics as well as a VizRT 8k engine for realtime content. We have deployed an ‘in studio’ Spidercam to enhance the directors’ choices and overall visual impact. Spidercam is also tracked with AR/VR.” 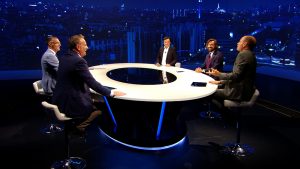 Augmented Reality has played a major role in Sky Italia’s sport storytelling for the past few years. “We use Augmented Reality in Sky Calcio Live using the VizRT system and also their Virtual Windows system for game analysis, data visualisations and content discovery. We believe that augmenting the storytelling with data provides a major value for our customers since we are able to use technology to explain in-depth not only the ‘what’ but mainly the ‘why’ of moves and tactics.”

The Sky Calcio Club studio set is based on video projection technology and located in a larger studio set measuring about 450 square metres.

“Thanks to the 270 degree we designed a set resembling a penthouse room with our city skyline where our best presenters talk about the week match days.”

De lulio concludes, “Our supreme goal is to provide the best possible content for our customers. Serie A Football represents a key product for us and we want to be able to make this product even better through the use of our commentators, pundits and the addition of the Sky Sport Touch to everything we do to provide a unique viewing experience.”