Creating a cycling broadcast spectacular at the Hammer Series 2019

The Velo4G miniature camera will be used on the weekend of 7-9 June in the Netherlands during the second stage of the Hammer Series, the professional road cycling event developed by Velon. 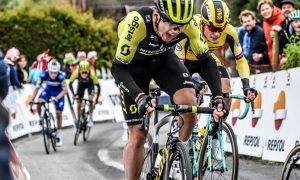 At the first stage of this year’s Hammer Series in Stavanger, the Hammer Climb on day one takes its toll on riders

Designed specifically for bike races, Velo4G is an autonomous system that can be operated as the only RF system on a race event.

Now commercially available, the camera is lightweight – only 160g – so it can be fitted to a bicycle without irritating the rider. The system uses 4G LTE to transmit footage and each unit can be fully remote controlled from any remote location in the world.

The Hammer Series has been created and developed by Velon, which produces live rider data, videos and social media content designed to increase fan engagement with professional cycling. It is a series of cycling races around the world with a unique team-v-team format over short, punchy lap-based courses allowing fans to see the riders more times as they speed past.

Sports multimedia brand, Sporza, part of VRT, is the host broadcaster for the Hammer Limburg race in the Netherlands on behalf of Velon, while Euro Media Group (EMG) companies, Videohouse, EuroLinX and Broadcast RF are providing production facilities, OB trucks and wireless kit.

Fans have reacted positively to Velon’s digital-first approach to the Hammer Series. Races are streamed live online around the world and over the three days of Hammer Stavanger and the following week, video views had topped five million. The races are also broadcast in 140 countries.

Bruno Coudyzer, manager for wireless production facilities at EuroLinX, which is the wireless division of Belgium-based Videohouse, commented: “With the Hammer Series, Velon have created a new type of cycling event. This is a very dynamic, spectacular, completely different way of cycling competitively. It’s not start at point ‘A’ and arrive at point ‘B’. This is three days of events with two days competing to earn points to gain your team’s starting position on the third day, a bit like Formula 1.”

Hammer Stavanger in Norway, and Hammer Limburg, are made up of three days of racing. In the first two – the Hammer Climb and Hammer Sprint – riders attempt to score points for their teams, then each team’s finishing positions from day one and two are combined to determine their starting place on day three’s Hammer Chase, a team pursuit against the clock.

This year, teams accumulated points in the Norway event, which was held 24-26 May, and next are moving onto the Netherlands, to be held from 7-9 June, and then Hong Kong in October, where there will only be a Hammer Sprint and a Hammer Chase; the team with most points at the end of Hammer Hong Kong will be crowned the Hammer Series Winners 2019. 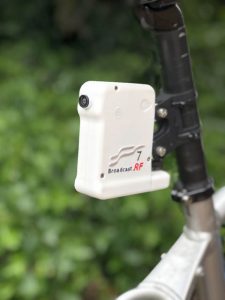 The goal for Velon is to grow the Hammer Series into a global series of city hub-based races that builds upon the appeal of premium professional cycling, and serves as a communications platform for host cities to promote and demonstrate initiatives in active lifestyle, mobility and sports tourism.

Kitting up in Limburg

Said Coudyzer: “We aim to get three to ten Velo4G on bikes during each race. The aim is to get as many bikes as possible equipped with a Velo4G; the full peloton would be ideal. Velo4G makes the race exciting, getting into the action in the belly of the peloton.”

On the challenge of placing cameras on bikes, Coudyzer said: “Velo4G is early in its design still. We are taking ten units to the Hammer series this weekend. The aim eventually will be to equipment the whole peloton.”

However, he added that Velon is keen to cooperate: “Velon is very willing to work with us, adding this new technology. We are all trying to make the viewer’s experience as good as possible. It’s great to have innovations like Velon with the Hammer Series; these provide us with a platform to showcase the latest new technologies and innovations for broadcast.”

This weekend, Velo4G cameras will be positioned on bikes, and four fixed HD minicams with RF equipment to operate via the relay plane will be placed day in as many team cars. Commented Coudyzer: “The manager of each team sits in a car that follows the race, giving coaching orders to the riders over wireless headsets; it’s very tactical. We hang a camera for live footage in each car, and that audio and video combination gives an additional angle to the cycling format for viewers.” 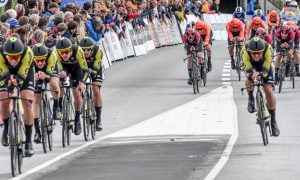 Teams fight to win on the final day of the Hammer Series in Stavanger, in the Hammer Chase

Additionally, three motorbikes are equipped with Grass Valley LDX86n 4KRF cameras during each race, a helicopter with a Cineflex camera, and an aeroplane above to receive wireless signals and relay footage back to the OBs. Each Hammer Series event covers a 30km to 40km area, although the EuroLinX set up using a plane enables it to cover far vaster distances, up to 200km.

Videohouse has also created a special set of graphics for Velon to use to annotate the content through their specialist inhouse graphics company, Boost, Coudyzer noted.

EuroLinX has been instrumental in bringing Velo4G to life alongside Broadcast RF, which developed the original solution for getting cameras into the middle of a peloton. Prior to its acquisition by EMG, Broadcast RF created VeloVue, a small camera designed for track racing. After it joined the Group in 2015, the company took the design forward to make it work for road cycling, working alongside EuroLinX and Euro Media France.

Velo4G is the evolution of Broadcast RF’s VeloVue live onboard camera series, VeloVue Track and VeloVue Road. VeloVue Road had to operate through an RF relay aircraft, and also lacked autonomy, which is why Broadcast RF developed the scalable, fully autonomous Velo4G.

Last year Broadcast RF and EuroLinX carried out the first trial of Velo4G at Ride London, looking at the practicality of the kit and what it could achieve. Two were used on the women’s Classique race, and two on the men’s Classic. The testing of the Velo4G camera was positive.

The second trial occurred at the Tour of Britain, Britain’s biggest international cycling race, looking at the level of control of the cameras and the quality of images when using 4G in rural areas. With EuroLinX and Videohouse running the production facilities at that event, Broadcast RF rigged bikes and cars to monitor the mobile network and images. As expected, the public mobile network being used by Velo4G to transmit live content back to the trucks fluctuated throughout the race, from 4G to no signal at all. However Velo4G has a Store and Forward function, so when the public network connection is poor or footage from a specific camera is not needed, the streaming connection can be turned off remotely and the device records onboard.

When in Store and Forward mode, the units send thumbnails to the company’s RF hub, which allows operators to see the type of shot the camera is offering without burning through data. When a request is then triggered to bring those pictures back, it sends the last one or two minutes-worth of footage back in a burst, at a far higher bit rate than when using live streaming in an area of poor connectivity. That burst results in a higher quality image. During tests at the Tour of Britain, Broadcast RF found that live streaming on Velo4G provided around 3Mbps, while Store and Forward provided around 5Mbps.

The Velo4G was redesigned over the trial period to create one smaller, more compact and even lighter unit suited to being mounted on both the handle bar of the bike to offer forward or rider facing shots and on the seat, as well as saddle mounted as per the original version. It also now contains GPS.

Coudyzer stated that the group is still working on getting telemetric and biometric capabilities added into Velo4G. “We are looking to get both worlds – biometric and camera – integrated into one lightweight unit,” he noted.

Velo4G has been used commercially since January this year. Said Coudyzer: “Adding this kind of technology to a cycling race can lift the viewer’s experience, particularly when the lead peloton is holding its position and not much else is happening; EMG is known for this kind of innovation, working to fill the second screen and social media, as well as live broadcasting.

“I’m passionate about cycling, so I’m lucky to be able to combine my job with my passion. Belgium is a cycling country; nearly every other day there’s a cycling event. It makes it perfect for working with our partners to develop and test new types of technology to broadcast cycling in new exciting ways,” he went on.
Coudyzer concluded: “EuroLinX, Broadcast RF and Euro Media France are supplying this kind of technology to the majority of cycling events in Europe, which is a window to showcase what we can do for other major events, like the Olympics.”