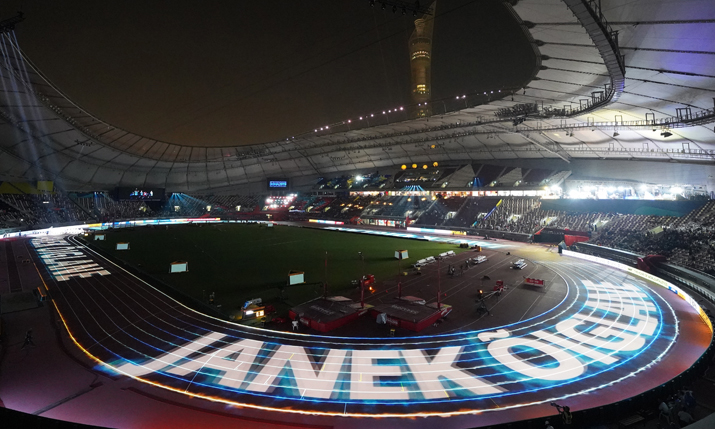 At the IAAF World Athletics Championships 2019 in Doha, Creative Technology took virtual reality (VR) and projection mapping to new levels in what is considered to be a world-first for sports broadcasting.

Creative Technology built a VR-based pre-visualisation tool to enable the IAAF and broadcasters to plan out the intricacies of the games, and laser projectors were used to show custom content across the entire running track for the finals of the athletics. The latter covered the lanes with athletes’ names as the lights in the stadium were switched off to showcase the spectacular effect.

For 2019 a multitude of technical innovations were introduced to the event including light shows, new camera angles and increased engagement with athletes, which brought a new dynamic to the event.

Florian Weber, IAAF event presentation manager, was responsible for the groundbreaking athletics presentation concept and challenged Creative Technology to deliver a projected track athlete introduction which covered the entire running track, as well as entertainment lighting, LED athlete entrances for both track and field positions, and an LED medal ceremony podium on top of the usual event presentation control and stadium relay screens.

In order to successfully deliver the track projection, it was essential that the stadium was dark, which required the sports lighting to be switched off. However, switching stadium lights off during a televised stadium sports show is not something broadcasters are comfortable with, so Weber commissioned Creative Technology to deliver a VR model of the Khalifa Stadium featuring athletics apparatus, production overlay and the proposed LED screens and track projection.

This was primarily to present the lights-out track projection concept to the broadcasters to ensure they understood and bought in to the concept, but it quickly became a key pre-production tool for the IAAF as the project took shape allowing for pre-visualisation of the entire stadium, which was hugely beneficial for stakeholders and sponsors. 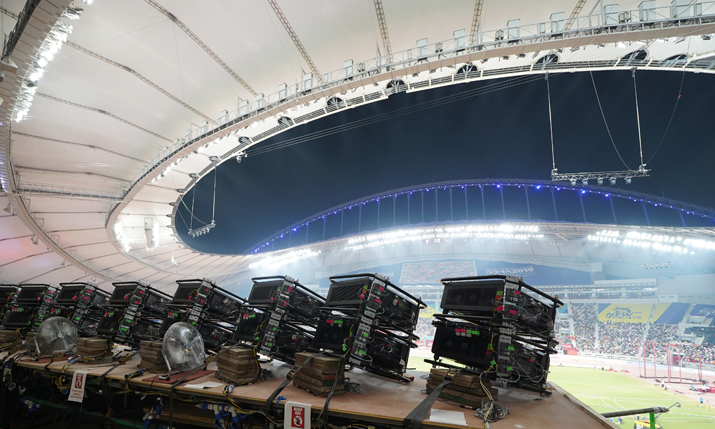 Steve Purkess, head of sport at Creative Technology, told SVG Europe: “We were trying to think of a way to illustrate what we were trying to do [on the track projection] to get the different broadcasters covering the event on board. We’ve used this type of technology on a very different scale before, but VR is now finding its place in different areas of industry; we’re just bringing it into our industry, and we did it in a large scale way.

“Generally when you do a show like this, you do visuals, and so does everyone else, so you end up with lots of visuals created on all different platforms. This [VR model] is all about having the same model throughout the entire process. People were sending us models and we were adding them to the big [VR] model. It was much easier to sort problems out, like obstructing views, which is a big issue in broadcasting [live sports in stadiums],” continued Purkess.

This bespoke pre-visualisation service also assisted broadcasters in other ways as they did not need to send teams of people to Qatar to check details such as camera angles and lenses prior to the games, drastically reducing the travel element of pre-event preparations, saving money, time and Co2 emissions.

Purkess explained: “Another thing we were doing [with the VR model] was creating camera positions for broadcasters. We built up a stock of camera lens models [into the VR programme] to show broadcasters what framing they could achieve with different lenses [from their positions within the stadium], so they could test in a virtual space rather than take a selection of lenses to the stadium itself.”

The VR model and the easy visualisation of design changes allowed Creative Technology to work closely with the IAAF sports presentation team to plan and design the in-stadia overlay, integrating all sports, functional, presentation and broadcast elements of the event. This could then be viewed by stakeholders to assess the project and pre-visualise the whole event from all locations within the stadium and from a live broadcast perspective. 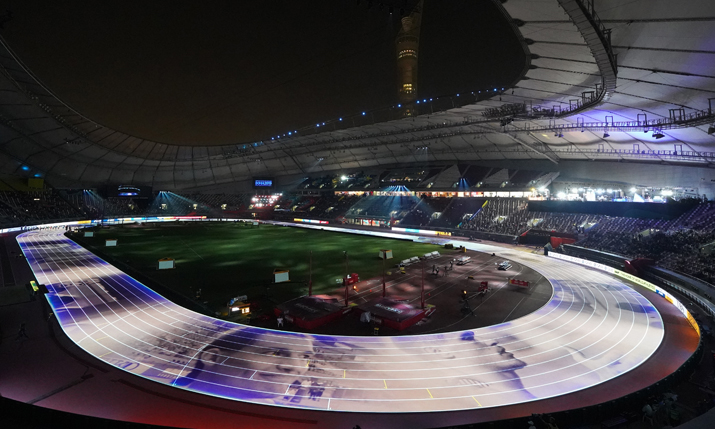 Arguably the most impressive and talked about innovation at the Championships this year was the track projection. Creative Technology used over one hundred 21K and 31k laser projectors to project custom content across the entire running track, bringing it to life during the finals.

The creative team, headed up by Weber, consisted of Rob Currie and Nick Clark-Lowes who worked closely with the Creative Technology team, led by project manager Matt Hartfree, to develop the content and technical solution to deliver the vision. This was no mean feat, considering the size and varying textures of the projected surface, not to mention the resolution of the content and the last-minute line up information for the track finals.

Over a year in planning, one of the initial tests required the team to hire the use of a local athletics track close to Creative Technology’s headquarters in London Gatwick to undergo a feasibility study, measuring the required light levels for good image visibility, and monitoring the colour of the projected image on the track surface alongside other LED display devices. The development then continued with projection tests onto samples of the actual Mondo track surface installed at the Khalifa stadium in order to look more closely at the colour qualities of the surface.

The projector placement and light levels required were then modelled in a Photon media server to work out how to project a single continuous image running around the track, taking into consideration environmental and structural constraints of the stadium as well as other stakeholder requirements.

Purkess commented: “Large scale projection is something we do a lot as a company, but the challenge with this [project] was we had created this massive canvas, so we needed very high resolution content; 8K pixels wide by 4K pixels high. Photon has amazing properties and has really good inbuilt tools for projection mapping at this type of scale, but creating content in this resolution and quickly – sometimes with only 30 minutes between final races – meant super high resolution content had to be created in a matter of minutes. Also, you don’t get a chance to test it out, as you need to turn all the lights off. But this was a real opportunity to bring some theatre and real focus to the athletes in a live event space, rather than a ceremonial space.”

On the projectors, one issue that arose was the heat generated not only by the machines, but the environment on Doha. Said Purkess: “We had hundreds of projectors and one thing you don’t think about is that projectors get really hot in Qatar, which makes them move; all that metal! So teams of guys had to go into the stadium after everyone else went home [each night] and using remote controls, re-map all the projectors onto a grid projected onto the floor of the stadium.”

Hawkeye also took Creative Technology’s VR model and used it to provide javelin projection tracking for broadcaster use during the games. Purkess said: “Hawkeye was working with the IAAF to develop technologies to enhance the understanding and engagement of different sports. They were going to create a model themselves [for the javelin tracking], but we already had so they used ours.

“You can, if you build the model at the right quality, use it at different stages of a project as you go,” noted Purkess, on how the VR model was able to adapt and grow to different uses throughout the Championships.

What Creative Technology now has is a workflow that is it able to use on future projects. Purkess said: “They great thing about Qatar was, the IAAF invested heavily in making this work. It was great to work with the IAAF and create this project on such a large scale.

“To do the same again would take us half the time because we have a good model now. This was our first big project on it, we’ve developed lots of tools for it, and we can take that and go out to other clients. One of the things we see this being used for is as a pre-production tool,” he added. 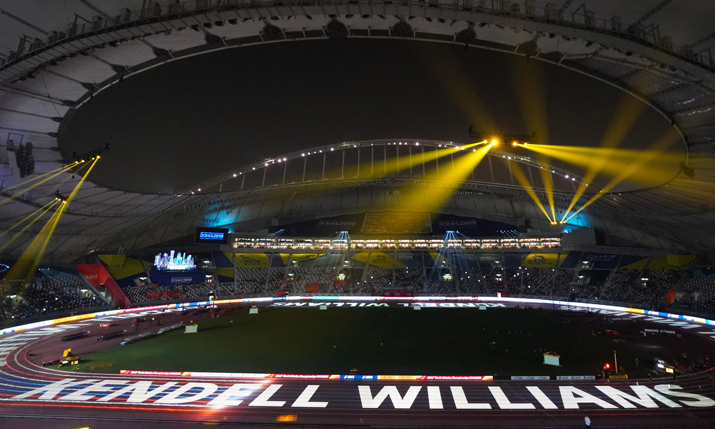 Everyone wants to see their name up in bright lights, and Creative Technology made it possible during the IAAF World Athletics Championships 2019 in Doha

In all, 24 broadcast and dedicated camera feeds were fed into the PPU and sent out via the switcher as four separate HD video outputs, each fed to the stadium control system over a Mediornet wide area network (WAN). Communication and audio feeds were also transported along with the video signals via the Mediornet WAN.

Doha 2019 saw the debut of the first midnight marathon taking place along Doha’s corniche with the iconic skyline as a backdrop. Creative Technology was contracted to supply video and audio solutions for the marathon and walks along the corniche with further audio and comms for the spectator grandstands. It was also responsible for distributing all live signals and content to the LED screens that ran along the finish line.

Irum Ashraf, CT’s Middle East general manager, commented: “Our local office fully supported the wider Creative Technology team with both human and technical resources. Having been part of several Athletic meetings held in Doha over the last year, Creative Technology’s local office played a pivotal role in providing knowledge of the local market, which helped with our successful delivery. It’s a very exciting time for sport in Qatar right now and having a base here puts us in a prime position to be involved in such great events in the future.”

Creative Technology also provided a number of other services for the Championships. To enhance spectator experience within the venue and create a greater focus on the finals for each athletics discipline a number of LED screens were installed throughout the stadium with the key placements.

The company also supplied eight mobile battery-powered LED Monoliths, a solution to field of play displays giving the athletes taking part in the field event finals the star treatment they deserved. The LED Monoliths could be positioned anywhere around the athletics arena displaying live data for athletes’ names and country flags in a world first.

Multiple feeds and an eight-channel recorder linked on a 10GB network to multiple NAS drives were supplied to the editors, which enabled them to select and record the action from all the available camera feeds within the venue. In addition to this, the editing team had access to all the broadcast EVS content collected on-site via IPD Director, including that of Creative Technology’s colleagues at NEP Broadcast.

Concluded Purkess: “Working towards the IAAF World Athletics Championships in Doha has been an amazing journey, delivering presentation techniques at a scale more commonly seen in opening ceremonies into live athletics gave us a unique challenge. It has been a privilege for Creative Technology to play a part in delivering this game-changing approach to event presentation.”