CTC Media operates a number of channels in Russia, as well as international versions which are popular in the surrounding regions and as far afield as North America and Australia. It ran an existing playout centre provided by Imagine Communications and now needed to expand its operations to provide for new channels and for streaming and VoD services. 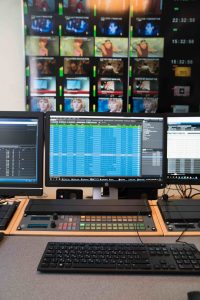 The system is rounded out by Selenio MCP encoding and the EPIC MV hybrid IP multiviewer for system monitoring, with control and data networks and SDI/IP conversion under the control of Magellan SDN Orchestrator, which allows CTC to design its own workflows. Both the EPIC MV and Versio are powered by Zenium, Imagine Communications’ pure microservices-based software architecture.
In phase one, which is already on air, CTC is using the new playout platform to deliver seven SD and two HD channels. Phase two will add 26 channels, including eight simulcast SD/HD services. The whole platform is fully redundant to ensure a high level of playout security. The software approach ensures a much higher density of channels than a traditional installation, and future expansion can be accomplished simply and quickly.
“We needed to expand our facilities, and we wanted to be as efficient as possible in our operations,” said Alexei Frolov, chief technical officer, CTC Media. “DNK and Imagine showed us that, using a software approach and the industry standard SMPTE ST 2022-6, we could achieve a flexible and highly productive solution that is compact and power-efficient. We are proud to be one of the first in the world to implement uncompressed IP playout on this scale, and we appreciate the work of our partners at DNK and Imagine for their efforts in creating this groundbreaking solution.”
Maxim Krivtsov, IT director of DNK Corporation, added, “The implementation of an uncompressed IP multichannel playout system was a key project for everyone involved. We won this project because, together with Imagine Communications, we demonstrated that the flexibility and security of the Zenium-based software could provide broadcast-quality playout performance from uncompressed HD over IP, using industry standards. This installation is a showcase for the world.”