A great deal has been written over the last 12 months about the impact that IP-based workflows are likely to have on video distribution, especially in the context of the SMPTE 2022 standards suite.

But there has been rather less coverage of the implications for audio production and the extent to which fundamental changes in this area are taking place at the same time as those in the video section.

Given the somewhat variable state of progress of IP video adoption across the OB community, it should come as little surprise that a similar state of play exists for IP-based audio. Although a few providers have shifted comprehensively across to IP, it is more common for selected aspects of production – such as commentary and talkback – to have evolved in this direction as part of a set-up that could accurately be described as ‘hybrid’.

Ian Smith, Head of Sound at CTV, outlines one such scenario in its present fleet, where MADI connectivity is still integral to day-to-day operations. “With regards to audio IP-based workflows in CTV’s trucks we are still at the early stages of implementation,” he says. “Currently we still predominantly use MADI as the audio backbone as this still meets our current requirements, [although] we have been using some Dante-based commentary systems with a Dante>MADI converter as a gateway. These have proven to be very reliable.”

But the most significant change to date has been in the use of talkback systems, “where our new and upgraded trucks are nearly fully IP [due to the use of] Telex’s OMNEO networking technology. The panels are fully IP and we have been utilising Ferrofish A>D units to covert from IP (Dante) to analogue for interfacing into legacy equipment.”

On the other hand, Timeline Television has been seeking to undertake video and audio transition to IP in a broadly simultaneous manner. This approach can be seen most explicitly in the groundbreaking UHD2 triple-expanding, IP 4K HDR outside broadcast truck, which was unveiled by Timeline last spring. 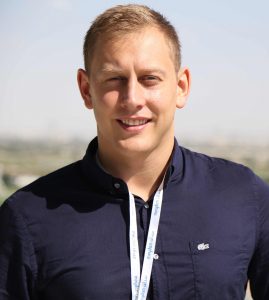 David Harnett, Head of Sound, OBs at Timeline TV: “We have tried to migrate both departments to IP at the same time”

David Harnett, Head of Sound, Outside Broadcast at Timeline Television, confirms that “we have tried to migrate both departments to IP at the same time; this is largely due to the dramatic shift behind the scenes required to make it happen. However, when you are working as a sound or vision operator in UHD2 it does not require a massive change in the way of working from any of our other trucks, and this is due to the design of the Axon Cerebrum control system over the top of the IP layer.”

With the move to IP meaning that there is no longer a central matrix in the truck, all of the audio in UHD2 resides within SMPTE-2110/TR-03 and AES67 streams. “For all the SDI conversion we embed/de-embed a 16-channel AES67 stream, which then travels through the network as a multicast stream independent from the video stream,” says Harnett.

“We can then manipulate these streams and replicate what would have previously been the audio crosspoint cards using two redundant servers designed to shuffle tracks within AES67 streams. The newly created streams with shuffled audio then get married with the video required at destination to create the embedded feed needed.”

To smooth day-to-day operations the Timeline team has constructed templates for use in both video and audio sections, making it possible to route normally with only minor changes in the way that video and audio associations are made. Effective collaboration between sections has been integral to the success of this change.

“There is no way that we would have been able to create a smooth audio and video workflow without good co-operation from both departments. I personally feel that since hybrid routers came along the days are gone in the sound department where we can say that the matrix is a ‘vision department problem’…!”

Timeline has also begun using Dante IP audio in its trucks and flyaways for tasks including VT audio monitoring, where it raises the possibility of greatly reduced cabling and increased flexibility. Harnett remarks: “At the planning stage we would previously have to think about how these monitoring feeds should be ‘normalled’ on the analogue jackfield to reduce the need for patching, but also give the VT operators enough options for different audio feeds from the router and so on. Now all we have to know is that they will all run on Dante, get a network cable to the positions, and worry about what is on there at the configuration stage.”

Harnett points to several recent sports events where an IP audio infrastructure has truly come into its own, including the 2017 World Para Athletics Championships for Channel 4 at Queen Elizabeth Olympic Park, London.

“We had UHD2 doing the world feed and a Portakabin doing the presentation facilities so that it would have disabled access,” he recalls. “This meant we had to build a de-rig gallery hanging off the resources from UHD2. On the sound side all we had to was extend a second mixer surface and all the audio was connected via IP; the connectivity was just power and a few network cables, making the whole process much easier.”

The flexibility that IP can bring to the (re)configuration of audio workflows means that the pace of transition is bound to increase throughout the industry, and that similarly high-profile case studies should be expected as 2018 continues.