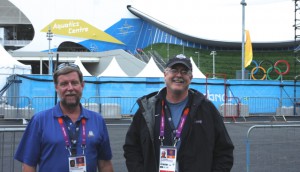 The Aquatics Centre has been a central focus of NBC Olympic operations since the Games began. And once again, CTV OB is helping NBC tell the story of the U.S. swimming and diving teams the way it wants to, with OB9 and its support unit on hand alongside cabins with six Avid edit rooms, a graphics cabin, and more.

Given that London is five hours ahead of the East Coast in the U.S., both the swimming and diving coverage get the edited treatment.

“Swimming coverage is done live and then polished up, and the races are put together while diving is much more editing-intensive,” says Ken Carpenter, NBC Olympics technical manager for aquatic coverage.

John Tomlinson, NEP Supershooters engineering project manager, notes that, with divers jumping off the platforms and boards every 20-30 seconds, it would be impossible to keep up with the action and integrate replays or interviews without missing the next dive.

“In swimming, you can have a five-minute race on one clip while diving is editing 15-second pieces together,” he adds.

The reliance on editing is a flip from the 2008 Olympics in Beijing, when the races were shown live in the U.S. CTV’s OB9 is at the center of the production, but clips and cameras are recorded onto an Omneon Media Grid so that the Avid editors can complete the edits. Content is then sent back to the IBC via a GigE network.

The NBC production crew has access to 11 of its own cameras as well as to 27 cameras supplied by OBS for the swimming events. Diving requires 10 NBC cameras plus an additional 20 from OBS. “We can direct the cameramen and have our own camera at the start and finish lines,” explains Tomlinson. “The team can also cut in shots from the ‘friends and family’ cameras.”

Graphics include Chyron HyperX, Stromotion, and the new “Splash-o-Meter” from Red Bee Media that shows how big a diver’s splash is.