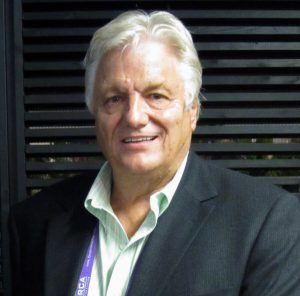 SVG Europe is proud to announce that Barry Johnstone, chairman of CTV OB, will receive the Outstanding Contribution to European Sports Broadcasting Award at the SVG Europe Sport Production Awards 2018. The Awards ceremony will be held at the end of the Sport Production Summit at the DeLaMar Theatre in Amsterdam on 13 September 2018.

“The Outstanding Contribution Award was founded to recognise the icons of the European Sports Broadcasting industry and following on from Manolo Romero’s debut award last year, there is no one more deserving of this award than Barry,” says Peter Angell, SVG Europe Sport Production Awards Chairman and Lagardére Sports, SVP, Media Production. “His personal contribution to the development of our business over the past four decades has been immense.”

Since the 1980s, he has been a mainstay in sports and music production in Europe and has also developed a reputation among US and world broadcasters as someone who can be relied on year after year. In 1992, when European Tour Productions was launched as a joint venture between the European Tour and TWI, CTV OB was involved and, in 1997, was awarded a five-year contract for ETP, allowing a fleet of OB units to be built specifically for golf coverage. Since that date CTV OB has been at the centre of every ETP event.

In addition, for 25 years, CTV OB played a key role in helping ABC Sports and ESPN deliver the Open Championship to viewers in the US. It now does the same for Sky UK and NBC Sports. And during the London Olympics, CTV OB was at the centre of the TV production of the Opening and Closing Ceremonies, one of the most complex ceremony productions ever.

“Barry has been a great personal friend and mentor during my time at IMG,” says David Shield, SVG Chairman and IMG Media, SVP, Global Director of Engineering & Technology. “We are hugely grateful to him for the way CTV has supported European Tour Productions since their inception. He is a legend within the sports and entertainment OB business and justly deserves this prestigious award.”

Ken Kerschbaumer, SVG, Co-Executive Director, Editorial Services, says that Johnstone’s influence on both sides of the Atlantic is a testament to his many strengths and the faith that people have in both Barry and his team.

“There are not many people in our industry whose reputation spans the globe, but Barry is one of them and having a chance to honour him gives SVG in both Europe and the US a chance to recognise his vast accomplishments and influence,” says Kerschbaumer.

The Sport Production Awards are open to SVG members and sponsors. To register to attend please click here.