Announces another is on the way by end of 2020

CTV OB’s new OB12A truck on the far left, next to the mobile data centre, TSV12

CTV Outside Broadcasts (CTV OB) has launched the latest addition to its fleet, OB12A, which hit the road recently at the Irish Open 2020 for European Tour Productions and is now following the UK Swing around Britain.

The truck is fully IP from end to end using the diPloy, the platform developed by CTV OB’s parent company Euro Media Group (EMG) during its three-year OBjective2020 project.

OB12A also has a little sister on the way, OB12B, which is also being fitted with diPloy and that will work alongside OB12A to create a powerhouse in the TV compound when it is launched later this year.

These two trucks working together will not only increase efficiency and broadcast goals for CTV OB’s clients, but will also have a large sustainability impact for the company.

The new truck is a large production and operational space that can support up to 40 people working on board. It includes three production areas, one sound area and one vision area. 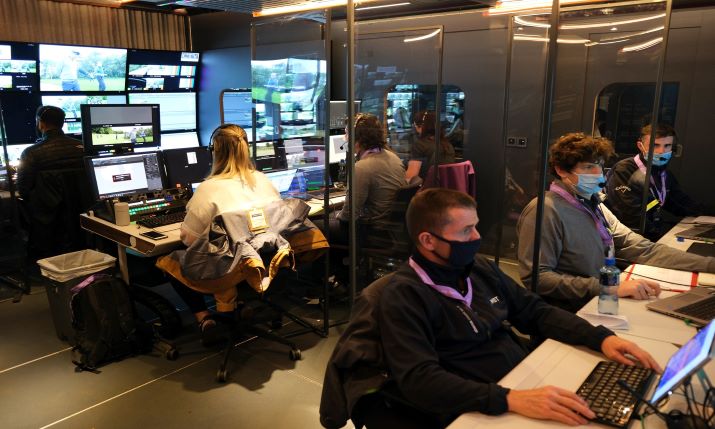 “This main truck has the biggest production and operational space I’ve encountered in any vehicle worldwide,” says CTV OB’s Hamish Greig on OB12A

Speaking to SVG Europe, Hamish Greig, CEO at CTV OB, says: “This truck has really been designed for the ambitions of our clients, as we renewed our golf contract. OB12A is designed to grow with our client aspirations in UHD and HDR. It has been built to cope with our largest on the road golf production as standard, which is normally 32 cameras and 10 RF cameras. It is also designed to hook up seamlessly with SDI trucks in multiple truck productions.”

Adds Greig: “OB12A is fully scalable, which is the key to anything that CTV and EMG ensure going forward. It is capable of managing the largest productions and has an incredible armoury of state of the art technology, and is the most powerful beast I’ve encountered, especially when its sister unit OB12B comes online later this year.

“This main truck has the biggest production and operational space I’ve encountered in any vehicle worldwide. The ceiling height alone is impressive; at the lowest point, I can only touch the ceiling with my arm fully outstretched,” he continues.

OB12A sits alongside a separate Data Centre, TSV12, containing the heart of the electronics for OB12A and freeing up space inside the main truck as well as creating a more flexible system. TSV12 is fitted with solar panels on its roof, furthering sustainability goals.

“Normally when you have a launch of a new truck, especially when it’s using new technology, there’s a lot of harassed engineers, a lot of people running around getting in the way of the production. But this, from the minute they walked in, there was [no issues]; it was just seamless”

Notes Greig: “There are no electronics inside the main unit; it’s all surface panels, it’s all monitoring, it’s all just control surfaces. All the actual electronics, hardware, everything inside the trucks and inside the field, are based inside the Data Centre, the front racked area of TSV12, [which is also] our support vehicle carrying all the kit.”

Says Greig on the creation of TSV12: “The reason for doing this was to create the most space and comfort possible for the production staff in the main truck. Any ‘classic single truck’ design would have resulted in less operational areas and space, more noise and heat.

“Also, we have flexibility of parking, being able to place the field-connected TSV12 near the field of play, and the operational units elsewhere.”

The interior of TSV12

Even air conditioning is supersized; while the air con inside OB12A is designed for a regular truck of its size, there is no equipment inside the truck increasing heat levels. Conversely, the smaller TSV12 truck has a normal air con design, but has no people, making it far more efficient at cooling.

Greig adds that sustainability was a large goal of the development project as well: “Once we have OB12B alongside OB12A, that will do unilateral, it will do all the ancillary stuff which is now in other trucks; the edit, the graphics, it will do extra commentators. Where we used to have extra cabins and trucks to do stuff, they will no longer be needed.

“That’s why we’ve done this to this scale,” he went on. “It will streamline our operation really. This will take away about two trucks and four cabins when we get to our larger productions. This is very much done from a sustainability point of view, even to the solar panels on the roof [of TSV12].”

The IP network – EMG’s modular standardised IP platform, diPloy – within OB12A was masterminded by EMG’s strategic partner, SDNsquare. It utilises a 100Gb Spine Leaf topology to manage the network, with red and blue network paths, and an end to end SMPTE 2110 format. The Spine Leaf composes of approximately 35 network switches, which are a combination of Arista and Netgear.

SDNsquare has collaborated with CTV OB to give OB12A a fully modular ST2110 IP-based infrastructure. SDNsquare has provided software-based IP network management, enabling a full non-blocking of converged IP networks with guaranteed, predictable and reliable quality of service, through its vendor-agnostic Grid technology.

diPloy, announced by EMG in early September this year, came out of its OBjective2020 project that launched in 2017 to migrate the company over from SDI to a fully IP-based infrastructure, and to find and take its partners on the journey with it.

CTV OB had two primary needs for OB12A, which were part of its evolving Objective2020 project, and which it has worked on with SDNsquare on over the last three years.

The first was that the chosen technology architecture should be both futureproof and agnostic in terms of infrastructure and topology. The second was that those who would operate the system would need to be familiar with it; the operational and high level configuration should be presented as a system that is familiar to CTV’s engineers, whilst providing them with tools to diagnose any software and hardware related issues.

The truck would also need to be able to support CTV’s client’s needs for the foreseeable future – capable of responding to changes in video formats, for example – and be capable of scaling according to the client’s requirements. 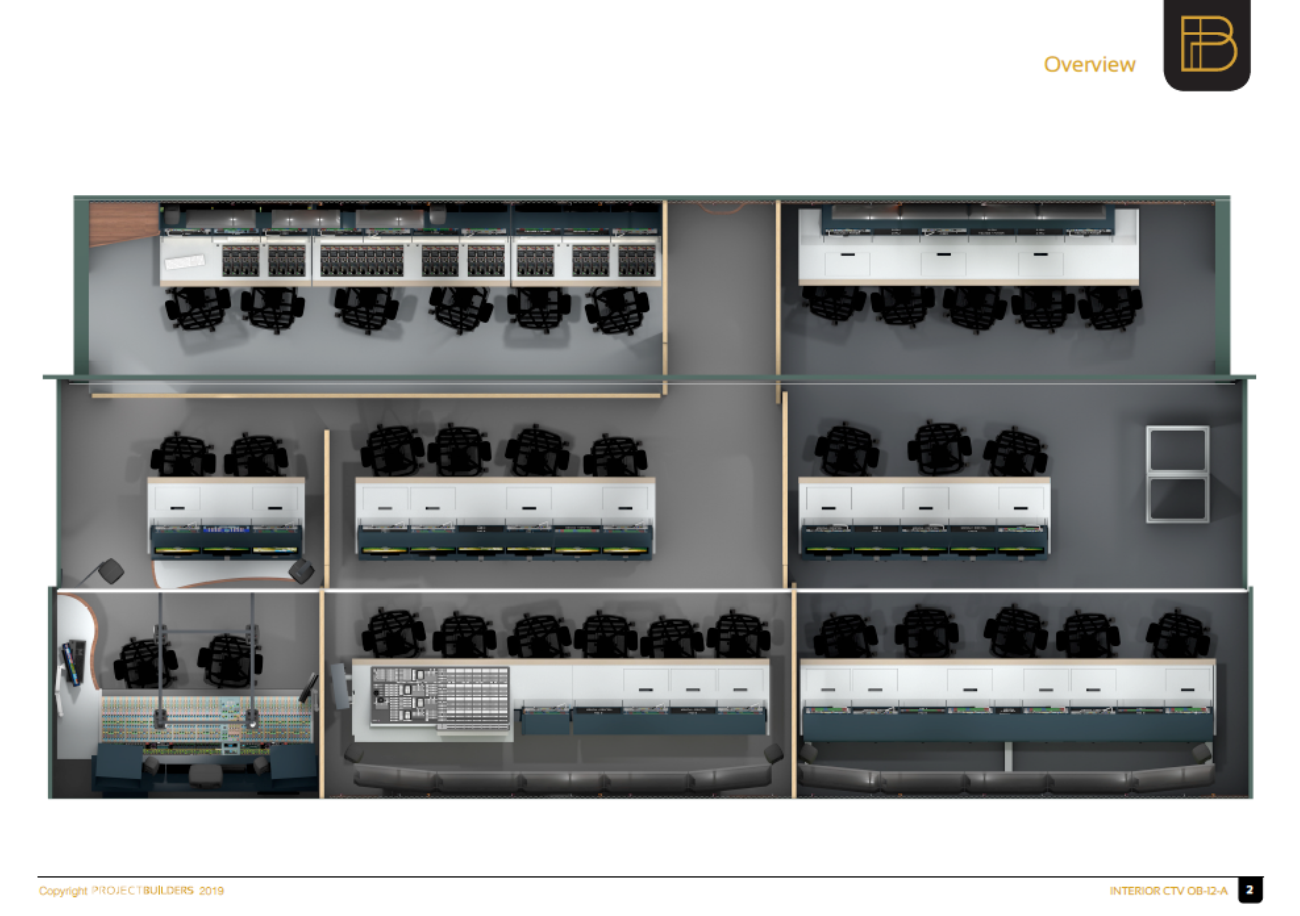 The layout of OB12A from CTV Outside Broadcasts

SDNsquare Grid uses software-defined networking to deliver IP network orchestration for media, whatever the use case, whatever the type of workflow. Grid can cope with all types of data streams in a predictable way. With Grid, IP data paths can be set up without packet loss, with low latency and with the exact bandwidth needed, even in bursty, high impact traffic in many-to-many environments.

Henry Alexander, CEO of SDNsquare, expands on the technology benefits that the new IP-based OB12A truck has gained: “A random or flexible spine leaf topology means that, instead of adding a new device and extra Gb to the network, CTV OB can, for example, software split 100Gb into four 25Gb allocations or one 25Gb and leave the remaining 75Gb for further usage. This is called bandwidth management and it’s patented by SDNsquare. The idea is to put everything – video, audio, intercom, management, KVM, office and internet – on the same network, guaranteeing every single flow at the network switch level.”

The IP modularity that SDNsquare have achieved for CTV OB is unique because of the advanced configuring capabilities enabled by its Grid. The latter allows users to configure any device and add any device, while providing full control of the network.

Added Greig: “CTV made a choice to follow the EMG dIPloy scaleable and modular approach to video over IP networks, whereupon the network topology was designed inhouse and validated by SDNsquare, who provide the software defined network layer. Importantly, it is a single network.” 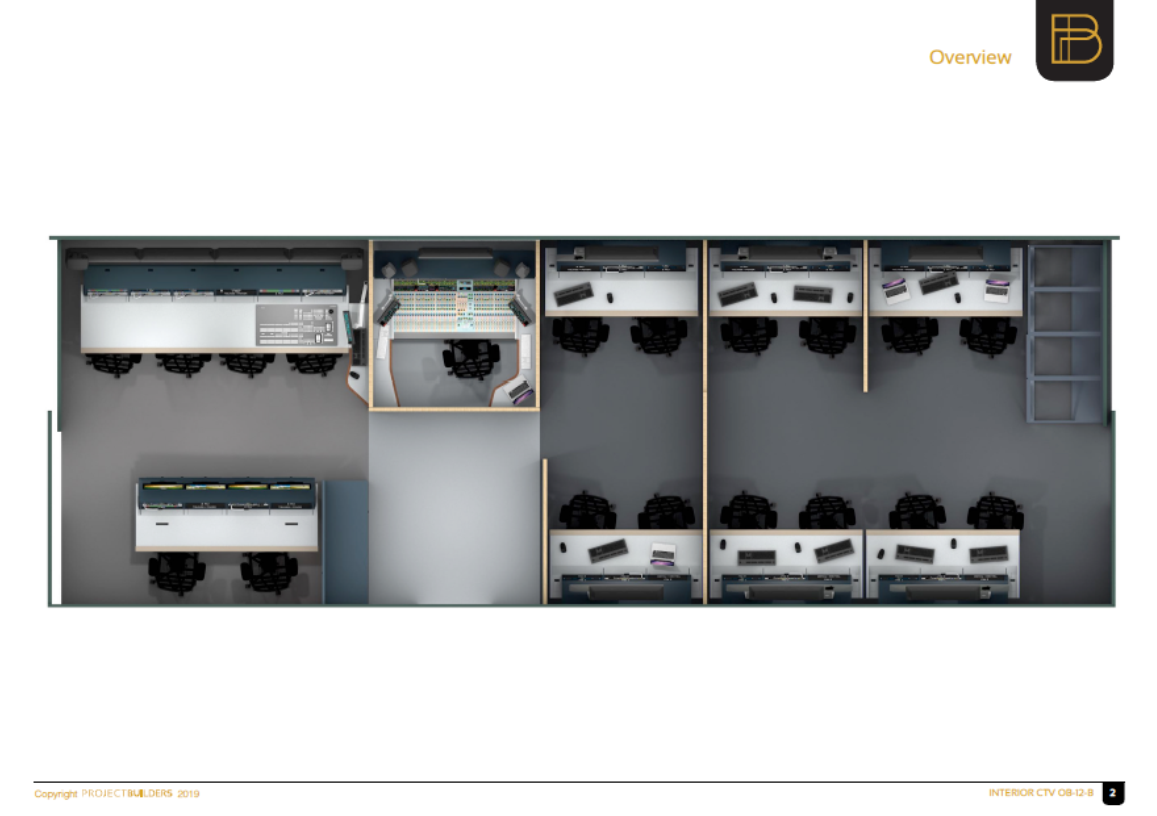 Cleaning up the mess

There are no traditional fibre interfaces as AV data transports; the truck uses full IP transport capability around the truck and to the field. The network carries all AV and data sources throughout the broadcast system (UHD, 3G, internet, audio, GFX, data control, etc).

Four Neutrik MTP fibre cables carry all the signals and controls between the Data Centre and the main unit. Access to field devices utilise 10km lasers enabled by 25Gb and 10GB network paths.

Adds Greig: “With four cables connecting the Data Centre to the production unit and all external field services, ie, TED’s (our own manufactured product for in field camera transports over two SSM fibres) located in the Data Centre, the video loom count has gone down from 15 to zero, with a similar reduction in audio multis, which enabled another one of our objectives of minimising compound cabling.”

Greig comments: “Golf, historically, is a combination of a lot of trucks in the compound, and multis and video looms that can get kind of messy; we wanted to clean up that mess. So everything is just connected with one fibre.”

EVS’ Cerebrum is the truck’s broadcast controller and manages all the interfaced broadcast devices on the network, manged through customised, easy to use GUI’s.

Notes Greig: “For example, the truck has tablets everywhere so people can customise their areas, such as assign their monitor walls with just touch, quickly and easily; this saves the usual bottlenecks where you have a harassed system engineer trying to programme everything. For our SDI-specific engineers, the job of programming uses exactly the same GUI’s [as they are used to]. 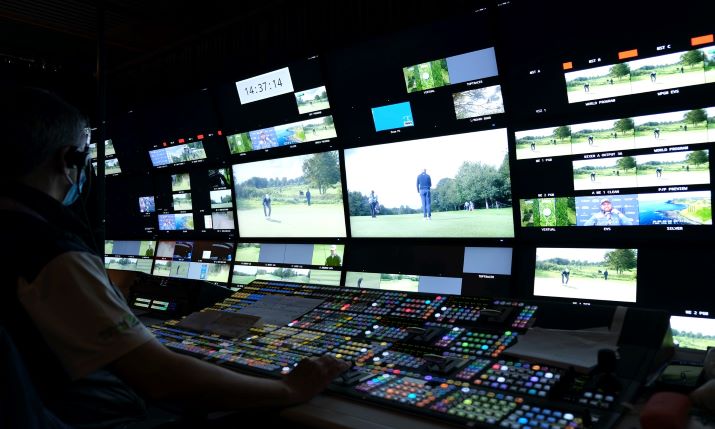 Meanwhile, AES 67 looks after the camera talkback as the CCU’s are all native IP, plus access to EVS systems, camera mics , TX paths, etc.

Any analogue interfaces (for instance, base stations or external four wires) use Ferrofish gateways.

Comments Greig on the launch of OB12A: “Normally when you have a launch of a new truck, especially when it’s using new technology, there’s a lot of harassed engineers, a lot of people running around getting in the way of the production. But this, from the minute they walked in, there was [no issues]; it was just seamless. It was just incredible! I’ve never ever encountered anything like it. And that is not bullshit; it was absolutely unbelievable.”

Proving that point, Mike Crowe, executive producer for European Tour Productions at the Irish Open, said: “We went on air at 13:00 on Thursday 24 September. It was like settling down at home with my slippers on; the launch of a state of the art broadcast truck was a completely seamless enabler to the production.”

Greig concluded: “I’m incredibly proud of what my engineering team have delivered, and through a pandemic. A huge amount of training and embracing of IP technology to its fullest potential has been utilised, allowing us to deliver a powerful tool to service CTV’s and EMG’s clients going forward.”