Cue the OB: How IMG produces snooker coverage for the BBC

Sheffield’s iconic Crucible Theatre is once again the venue for, arguably, snooker’s most prestigious tournament – the World Championship. Starting on 18 April, this tournament, which has been running since 1927, is played over 17 days in what has been described as the unique and intense atmosphere of the Crucible.

Alongside coverage shown on BBC, this traditional event is also aired by British Eurosport. In fact, the worldwide audience has been estimated to be around 400 million. Production of the tournament has been provided by IMG for the past 18 years, with OB facilities coming from NEP Visions since 2012.

“We normally start planning for the tournament in early February,” reveals executive producer Alison Witkover. “Having said that, as this is now a regular event for us, we will have a pretty good idea of what is required. However, what is really good is that the organisers do not just send us the schedule and say ‘that’s that’. We maintain a close – and excellent – relationship with the organisers and that means they will work with us to ensure match schedules marry with transmission times as much as possible.”

Witkover, who has been producing snooker coverage for 15 years, says that her daily schedule during the tournament begins with the creation of a running order the previous evening. This is then emailed to the presenter, Hazel Irvine or Jason Mohammad. “I also discuss with the seven feature producers assigned to the championship what material we can create that relates to the players in action the following day. We have two ENG crews, four editors and three FCP edit suites on site that will produce this insert material for us. The feature producers are very pro-active in coming up with ideas for the programmes. I normally allow them freedom to make those features as long as they need to be – within reason. If the story is worth two minutes, then we’ll go with that – if four minutes then that is the duration we will try to accommodate.”

Alongside the material created at the event, a number of short inserts – averaging one minute or one minute and a half – are produced in advance, enabling them to be played out between frames, if required.

Each morning at 0900 Witkover has a meeting with the presenter to talk through the schedule for that day. On a daily basis, too, she will liaise with tournament organisers regarding walk-on time for the players, interval durations, gaining player access and so on .Then Witkover, or one of the other programme editors, will take charge of the presentation of each live programme as it is transmitted.

As far as the relationship with British Eurosport is concerned, Witkover says that alongside providing the world feed, there is liaison regarding start time of matches and commentary positions.

During the early stages of the tournament, when two snooker tables are in use, space is limited within The Crucible for a presentation studio. During that period, presenters Irvine or Mohammad and their pundit guests broadcast from the nearby Sheffield Winter Gardens. During the last five days of the event, and with only one table in use, there is room for a glass studio within the auditorium of The Crucible to be constructed.

In both cases, however, the production is handled from a scanner within a broadcast compound located at the main venue.

NEP Visions provide four trucks for the tournament for production and editing. For the main table coverage, its HD4 double expanding trailer is 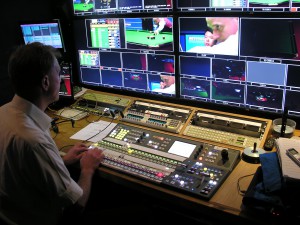 used, while the slightly smaller Voyager 2 is employed for matches on table two.

In both vehicles directors carry out their own vision mixing on Grass Valley units that have been adapted to allow wipe transitions to be carried out easily from aux buttons and for onscreen Vizrt graphics to be inserted each time the main camera 1 is selected. Similarly, the Telestrator can be readily overlaid through a one button press.

Presentation comes from Visions’ Horizon vehicle with the director here assisted by a vision mixer. Editing and archive material is handled by Voyager 1 truck.

So, what makes a good snooker director?

“I really enjoy the game,” states Steve ‘Doc’ Docherty, the senior table director with more than 20 years’ experience of the match coverage. “I like reading the game and anticipating where the next shot is going to be played. As far as a challenge is concerned, because the sessions can be long, maintaining concentration is vital. Then making sure we get the best shot, replaying where it helps to tell the story and putting in appropriate graphics to enhance the viewer’s experience.”

During the early rounds when twin tables are in use, there are two additional match directors working alongside Docherty.

He goes on to say while delivering the pictures of the game has remained similar over the years, the technology surrounding replays and graphics and, of course, better quality images with High Definition, has improved. “We try to use far more replays from different angles and show essentials such as the spin on the ball. The director decides on the angle of the replay and the EVS operator plays them in as directed.”

When two tables are in use, nine cameras are used for each, with a beauty shot offered to both tables. A hot head is used for an overhead shot of table one. For the finals, a Jimmy Jib will be brought in to supplement the coverage.

“We will have twelve cameras for the final, including one I-Movix Sprintcam hi-motion camera,” reports Docherty.

He continues: “Covering snooker is quite different to other sports. You are working in an area that is very small and this presents a major challenge for camera operators. There are few sports where they get to stand right next to the athletes.”

That close proximity, says Doc, can affect a player’s performance, their career, and their chances of winning a world championship. “The way we prepare is to get the right cameramen out there in the arena who are experienced and who are known and trusted by the players. Camera operators know not to move as the shot is about to be executed. So we tend to use the same people.” 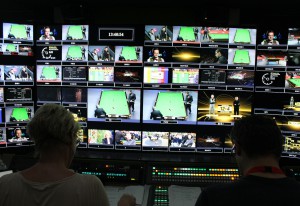 Presentation from Sheffield is handled from the Visions’ Horizon truck

That stability is also a theme for OB provider NEP Visions. “We cover three snooker tournaments a year for IMG and because the set-ups are very similar, we try to keep continuity of trucks, equipment and people,” explains Visions’ engineering manager, Kevin Orwin. “There are still challenges and one of the biggest is the sheer scale of this tournament. Coverage starts at 1000 and goes on until the last match has finished. There are four trucks to service, feeds to Eurosport throughout the whole day and there are interactive feeds, as well. And, of course, during the early rounds there is the additional remote venue at the Winter Gardens for which we have to provide connectivity.”

Orwin goes on to report that one major innovation for this year’s Sheffield event has been in the change of supplier for the review and analysis of predictive shots through the use of virtual technology.

While producer Witkover was in Beijing on another assignment, she was approached by Chinese company, Rigour, about providing replay technology and following an intense evaluation process it was decided to use the system for the 2015 tournament.

The system has two main functions: site reset and augmented reality. The site reset function enables a static picture of the table to be captured and displayed on a large screen in the playing arena. This allows the match referee to place the balls back in their original location should re-spotting be needed following a foul stroke.

Meanwhile, augmented reality allows 3D technology to simulate the scene, and within two seconds the table can viewed from multiple angles allowing viewers to see the various options that might be open to players.

“We trialled during the earlier Masters snooker tournament and was found to be precise,” says Orwin. “It is extremely accurate and helps commentators to decide in advance whether a shot is achievable.”

He says that another advantage is that the system is the ability to feed an image into a large TV monitor in the venue to enable a referee to precisely re-spot a ball in the event that a foul shot needs to be retaken.

Orwin reports that although some archive material is on tape and can be played into programmes in that format, most of the workflow is tapeless. “For archiving we have now switched to LTO disks because they require less space for storage.”

This year’s tournament will conclude on 4 May, and by then around 150 hours of programming will have been shown on BBC2. British Eurosport will have provided additional coverage for its audience outside of the UK. In addition, all matches will have been made available on the BBC’s Red Button.

Covering the World Championship is truly a massive undertaking.