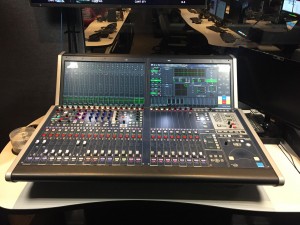 The studio networking is handled by a Nova73 compact, which connects the mc²36 consoles, the crystal desk and three V__pro8 video ‘toolbox’ units that act as the router for integrating the video and audio. This compact, fully digital, 8-channel video processor contains all of the “glue” features needed in broadcast production workflow. Combining video and audio management in a single tool guarantees maximum efficiency and greatest operating safety, with significantly reduced space, wiring and cost considerations.

Lawo’s all-in-one mixing desk provides top sound quality and a powerful DSP micro-core with internal 512×512 port audio matrix and integrated I/O. Since it is natively equipped with RAVENNA/AES67 technology, the mc²36 integrates seamlessly into broadcast IP infrastructures. With six mc² Compact I/O units, Latina TV has purchased a cost-efficient and compact stagebox setup that expands the connectivity of the mc²36 onboard I/Os.

For news production, the broadcaster installed a Lawo crystal mixing console. Workflows can be optimised using VisTool. This touchscreen optimised PC software gives extended visualisation and control of crystal installations, and can be customized to meet any requirements – displaying all console parameters or a reduced set of essential operation functions.

After in-depth market research and after a series tests, Latina TV found that the Lawo equipment met all networking capability requirements – providing integration via RAVENNA and MADI – as well as reliability, redundancy and user-friendly operation. With Lawo, the broadcaster achieved the desired flexibility by networking and integrating all control rooms and studios.

Nacho Gonzalez, Sales Director for Spain, Central & South America, comments: “When the request arrived from Telefonica Servicios Audiovisuales for Latina TV, I arranged a meeting at the NAB show. After the Telefonica people were given hands-on-experience of our consoles and had learned about the networking capabilities of our solutions, Lawo developed a custom networked concept on the spot, and we could offer all the equipment needed from one source. Now Latina TV benefits from the flexible use of six studios and two mc²36 for large productions, resulting in a much more efficient workflow.”