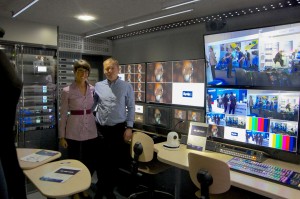 Krejci and Malec inside the new Syntex UHD trailer at IBC

A lightweight, relatively low-cost Ultra HD OB trailer has been developed by a systems integrator from the Czech Republic that would be ideal for small or medium sized productions. The trailer was developed with Panasonic, to show off its new UHD cameras at IBC. “This is just the first idea. It is very flexible,” said Katerina Krejci, business manager, Syntex.

If customers need it to be bigger, or with different equipment, that can easily be done. The prototype used a Panasonic AV-HS6000 control panel and UHD monitors, with most of the other main equipment coming from Blackmagic Design (for which Syntex is a distributor for central and eastern Europe), including two Blackmagic 12G routers (one for monitoring, the other for switching).

The trailer also used an RTS intercom, with a Lawo MC2 56 audio console, with 5.1 surround sound, and Lawo routing.

The trailer by itself, with no video equipment, but with air conditioning, work surfaces, insulation and lighting, would cost about €110,000. It can hold four racks of equipment. “It is a very light trailer. Three tons. So it can be pulled behind a normal car,” she explained.

“There is no truck or trailer on the market like this yet,” she claimed. “It is quite unique. We got a very good reaction from visitors to the show.” The trailer was designed by Mila Malec, Syntex’s technical manager.

Syntex has built eight OB vans so far, “but not this size and not 4K,” These have been general production vans, some used for sport, “but the Czech market is really small, so production companies don’t just focus on sports,” added Krejci.

Its biggest vehicle has been a double-sided 12-camera trailer. However, it felt that something smaller was needed to fill a gap in the market, “because people are not only looking for a big broadcast trailer.”

The trailer was shown at IBC with Panasonic’s new AK-UC3000 UHD studio camera, the new AG-DVX200 4K ENG camera, and the new AW-UE70 UHD PTZ camera. The AK-UC3000 is due for release later this year, and outputs a UHD signal up to 3840×2160 50/60p. Features include shockless gain (-6~36dB) and multi-step digital noise reduction. IP streaming (future option) and IP control will be supported. It has a single large sensor with a B4-mount (via convertor). 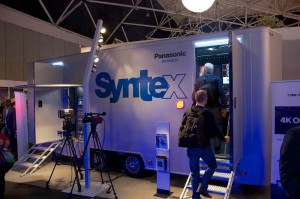 Pulling power: The trailer is light enough to be towed by a car

The AG-DVX200 is a compact 4K/Ultra HD Micro Four Thirds sensor camcorder that offers up to 50/60p UHD recording and will cost £3,420 (+VAT). It uses a new Leica Dicomar 13x f/2.8-4.5 optical zoom lens (28mm — 365mm in 35mm equivalent for HD use or 29.5mm — 385mm in 4K mode), which has separate manual zoom, focus, and aperture rings. It also has enhanced optical image stabilisation, including a five-axis Hybrid Image Stabiliser and 4x correction-area image stabiliser that is claimed to produce clear images without blurring. It can record at up to 120 frames per second in HD and has 3G HD-SDI and HDMI 2.0 (4K) video outputs. There are two SD card slots, for backup or relay recording at up to 150Mbps.

Panasonic also has a new UHD 50p B4-mount box camera, the AK-UB300, aimed at sport, remote studio and concert applications, with simultaneous UHD and HD outputs. It has low-light noise reduction and a newly-developed haze reduction function. The camera is compatible with current Panasonic indoor and outdoor pan-tilt systems and, using IP live remote monitoring, up to 10 cameras to be viewed and controlled simultaneously from a web browser.

Panasonic is working on IP-based production for Ultra HD, and announced a development partnership with Grass Valley at IBC. “Video over IP will reduce system costs, allow easier installation, and assist the transition to 4K and 8K,” said Kunihiko Miyagi, director of Panasonic’s Professional AV Business Unit, who thinks system flexibility is the most important benefit.

“We see Video over IP working alongside conventional systems, such as SDI, but offering increasing convenience and operability and decreasing installation costs,” he added.

Panasonic is currently concentrating on ensuring its cameras work with IP, including a built-in module for its new UHD studio cameras, and demonstrated a Varicam working with a Grass Valley K2 Summit server, sending 4K 50p via a network connection.