DAZN, the subscription-based live-streaming service, is building its reputation in the US as the home for fight sports, with more than 100 nights’ worth of fight cards throughout the year. However, it’s obvious how important a night like Saturday 4 May was for the breakthrough platform when its crown jewel, boxer Canelo Alvarez, entered the ring. 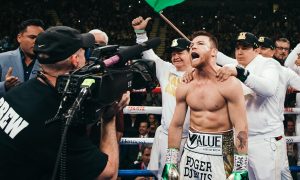 DAZN garnered a lot of attention when it made Alvarez one of the most highly paid athletes in all of sports when it signed the current middleweight champion to an 11-fight, $365 million contract. So it should be of little surprise that Alvarez’s latest bout, a victory over Daniel Jacobs at T-Mobile Arena in Las Vegas on 4 May, attracted the very highest level of production and technology from the DAZN team.

“Overall, I thought it was a great effort by my production team,” Matt Miller, head of production, DAZN, said in an email to SVG in the days following the fight. “From load-in to load-out, there are so many moving parts to fight nights like that one. It takes the entire group working seamlessly, from start to finish, to make it happen. I was proud of what the team accomplished on Saturday.”

DAZN more than doubled the camera complement it deploys on a regular fight card, filling T-Mobile Arena with 20 cameras, including some top-of-the-line devices like the JitaCam, the 360-degree jib camera that extends from the ceiling of the arena above the ring, and a DynamiCam, the three-axis cable-cam system designed to be a bit more compact and efficient than a traditional aerial camera used in other big-stadium sports events.

According to Miller, the JitaCam and the DynamiCam are regular cameras that he and his team want to feature on all their events to show DAZN’s commitment to cutting-edge storytelling of fight sports.

“We wanted that to be one of our signature cameras in our coverage,” he explained. “There was a time when we wanted to offer that individually, but that’s still a work in progress. It gives incredible boxing coverage while the action is going on. It’s such a nice view.”

The arena production compound was busy, with trucks deployed to serve unique productions to an array of audiences both domestically and internationally. DAZN’s English feed was produced out of NEP SS17 (accompanied by a B unit). The world feed was hosted by NEP’s Atlantic. The Spanish feed, meanwhile, was handled in Token Creek’s Victory. Separately, TV Azteca and Televisa had their own production units for shows airing across Mexico (Alvarez’s home country). Besides these mobile units, there were three uplink trucks and a bevy of generators for power.

The fight’s distribution relied entirely on fibre, with IP for backup. The feeds from the site went through Aldea to Montreal, where they were plugged into DAZN’s internal distribution circuits and delivered to streaming customers.

When asked whether producing marquee fights for a streaming service rather than a traditional broadcast network changed the philosophy of the efforts behind the production, Miller notes that it’s a little bit yes and a little bit no.

“The yes is that we all feel since day one of this project that we needed to do something different,” he explained. “We want to bring something new to the sport and how it’s produced. I think we have done that to this point, and, on Saturday, we took it another leap forward. But [boxing] is shot in a way that, while we try to take technology to the next level, it’s still simply 20 cameras throughout an arena pointed at a ring. At a certain point, it comes down to the two guys in the ring to make it compelling.

“We’ve added a ton of cameras and a ton of technology, and that’s what’s going to set DAZN apart,” he continued. “We’re not just going to give you the normal linear broadcast that you normally expect. What’s also helped us is that, other networks come on the air for maybe two or three fights at the end of the night, [but] we’re showing you an entire fight card so that we can get into the action and how the storylines of the night progress. It’s an entire night of interesting fights and action, and that’s a huge part of what separates us from others.”

Miller oversaw a crew of full-time and freelance production crew totalling approximately 110 people and including the front bench of producer Dave Harmon (who has a storied career at HBO Boxing) and director Rick Beczynski. The duo handle all of DAZN’s marquee fight cards.