DAZN has sub-licenced the highlights for Germany from sports rights agency SportA with clips from all 64 2018 FIFA World Cup games available on the platform as soon as 45 minutes after the final whistle. 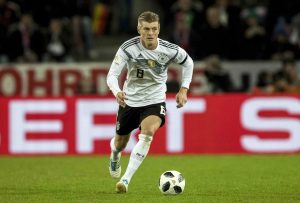 COLOGNE, GERMANY – NOVEMBER 14: Toni Kroos of Germany runs with the ball during the International friendly match between Germany and France at RheinEnergieStadion on November 14, 2017 in Cologne, Germany. (Photo by Boris Streubel/Getty Images)

The highlights will be presented in DAZN’s house style, similar to the Bundesliga highlights show produced by DAZN for the 2017/18 season, and will be available at no extra cost, as part of the standard €9.99 per month subscription package.

The FIFA World Cup is the pinnacle of world football, and sees 32 teams from all corners of the world compete for the most sought-after trophy in the sport. Current holders Germany will look to become the first team since Brazil back in 1962 to successfully defend their crown after Mario Gotze’s extra-time winner against Argentina in Rio De Janeiro back in 2014 gave the Europeans their fourth triumph in the competition.

Usual suspects Spain, Brazil, France and Argentina will be looking to be crowned champions this time around, with star players Lionel Messi, Cristiano Ronaldo and Neymar all likely to have a huge impact following successful campaigns for their clubs.

Kay Dammholz, Managing Director Rights & Distribution, DAZN said, “We’re absolutely delighted to be adding 2018 FIFA World Cup highlights to our growing repertoire of premium live and on-demand multi-sport content. The competition is the pinnacle for any footballer and so we’re eagerly anticipating brilliant action from the best teams and players on the planet. With the 2014 FIFA World Cup Germany holders looking to defend the title, the deal is a great addition for DAZN subscribers in Germany before the live coverage of the top European leagues as well as UEFA Champions League and UEFA Europa League commence later this summer.”